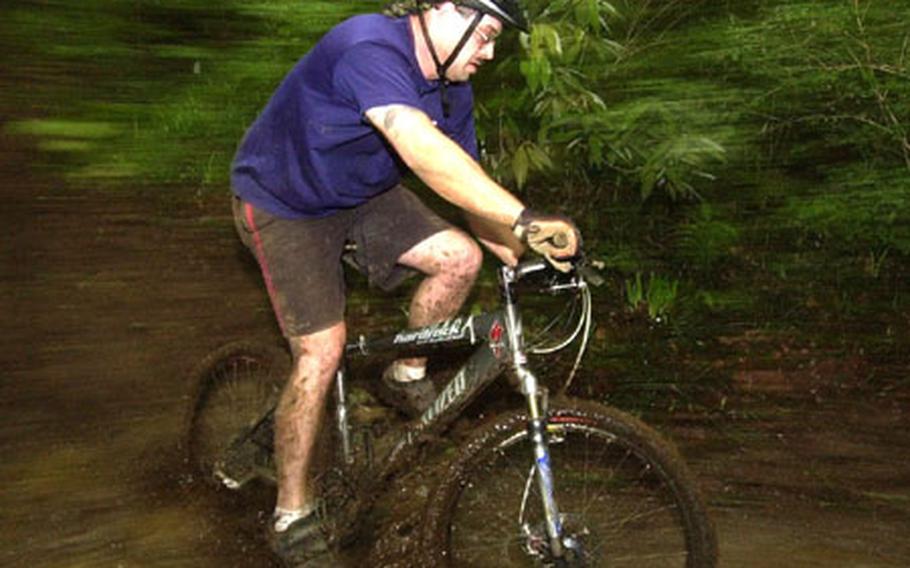 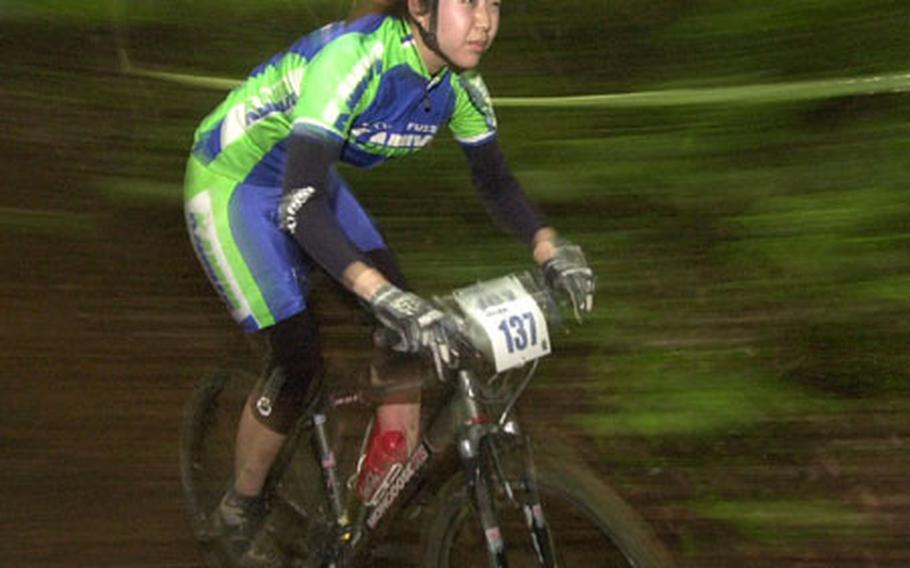 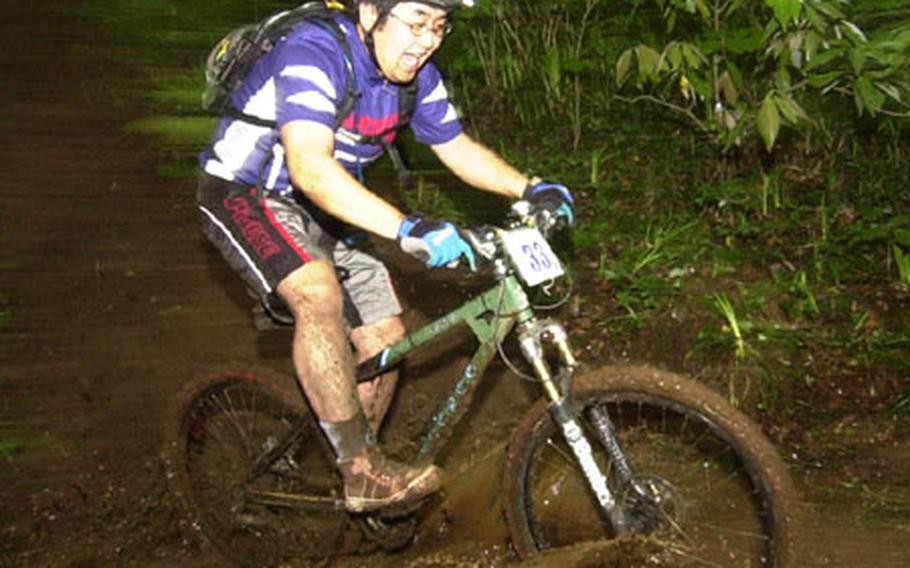 Nobuhisa Okoda enjoying the Tour de Tama as he gets muddy riding through a mud puddle. (Jim Schulz / S&S) 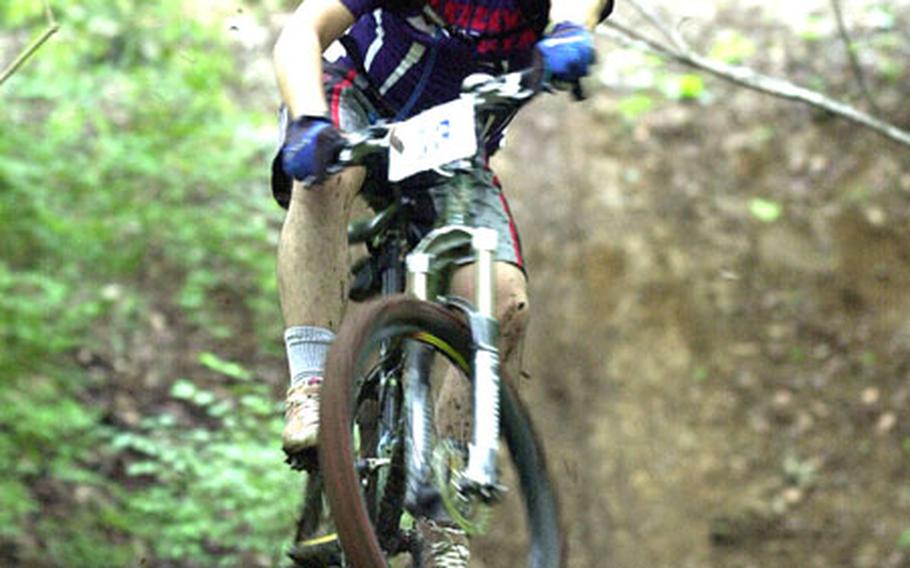 Nobuhisa Okada gets some air on the muddy trails of the Tour de Tama Saturday. (Jim Schulz / S&S) 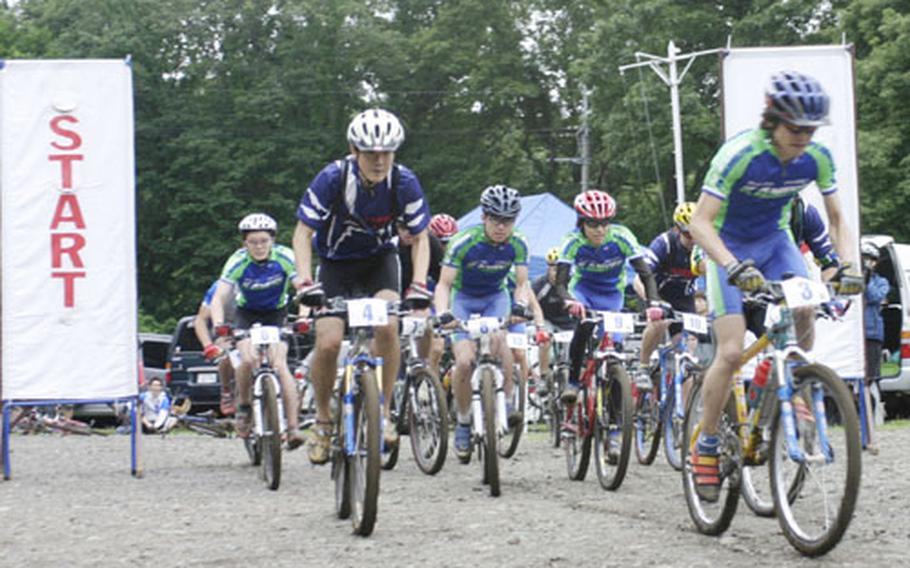 Mountain bike racers in the 14th Tour De Tama bike race shuffle for position Saturday at the Tama Hills Recreation Center, Japan. More than 70 American and Japanese riders took on the challenge of the steep muddy course for awards and prizes. (Mark A. Rankin / S&S)

Approximately 70 participants, including 22 Status of Forces Agreement riders from Yokota Air Base, endured 2&#189; hours of tricky hills and turns, made all the more challenging by weeklong rain that kept the 3.1-mile route slick and soggy.

&#8220;We had one major injury to a shoulder, dozens of flat tires and many broken egos,&#8221; said Tosh Oka, the Outdoor Recreation program director for Yokota&#8217;s 374th Services Division, which served as race coordinator.

That was typical throughout the only mountain bike race in the Pacific held on a military installation, staged biennially at Tama Hills Recreation Center.

According to race course designer Rick McCoy, rain does not matter. Tree shade tends to keep the sun out and the course moist for days after a lengthy rainfall, and Tokyo was hit by Tropical Storm Nida, which passed by the Japanese capital on Thursday.

&#8220;It stays pretty consistent. Normal wetness. But it was all right,&#8221; said McCoy, 36, a former Air Force security policeman assigned to Yokota who now owns R&R Cycles, a contract outfit that sells and repairs bicycles on Yokota and is one of the race sponsors.

Whether a cyclist is a beginner or has intermediate-level experience, McCoy calls the course a challenge simply due to the conditions.

McCoy made minor adjustments to the course for Saturday&#8217;s race, adding one jump section. And the &#8220;Double Doozie,&#8221; a twin set of steep drops close to the end of the course, remained as challenging.

The &#8220;Double Doozie,&#8221; a 45-degree downhill grade, caused a large number of cyclists to halt and summon courage. A handful merely walked to the bottom, which McCoy doesn&#8217;t recommend.

Elite division winner Yuichi Suzuki, 27, a Japanese engineer, was one who chose to walk some of the trickier hills.