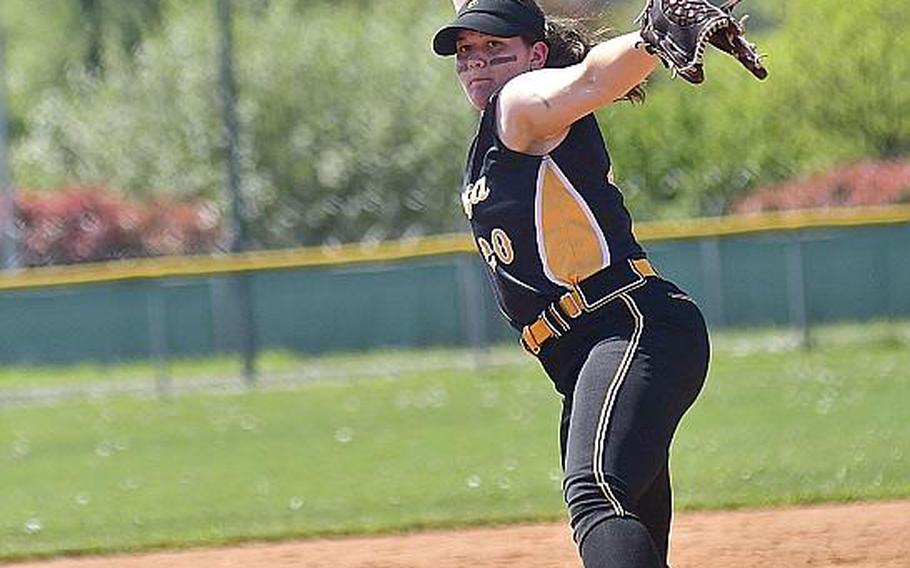 Buy Photo
Vicenza pitcher Chenoa Gragg delivers a pitch during the game between Vilseck and Vicenza that took place on Saturday, April 20, 2019, at Caserma Del Din, in Vicenza. Vilseck ended up winning the game 11-10. (Norman Llamas/Stars and Stripes)

Prep softball teams from across DODEA-Europe converge on the Kaiserslautern Military Community this week for Division I and Division II/III tournaments running Thursday through Saturday.

Division I It’s anybody’s game in the nine-school large-school tournament, as there’s nothing in last year’s playoff bracket or this year’s regular-season results to convincingly suggest a favorite. Instead, nearly every team has a reason to be very optimistic entering the season’s final three days.

The Vilseck Falcons finished the season on a four-game Division I winning streak. But the Ramstein Royals registered a sweep of Vilseck in early May.

Strong seasons from the Vicenza Cougars and Naples Wildcats made Italy a difficult destination for visitors from the north this spring. But the Cougars got the better of the Wildcats, taking three of four in the season series.

That leaves the reigning champion Kaiserslautern Raiders, who broke through for a long-awaited Division I crown last year, and the runner-up Lakenheath Lancers. Kaiserslautern won three of its last four games entering the tournament, while Lakenheath snapped a four-game swoon on the final day of the regular season with a pair of lopsided defeats of small-school neighbor Alconbury.

The Wiesbaden Warriors and SHAPE Spartans failed to get a foothold in the standings this regular season but have a fresh opportunity in the tournament.

Division II/III While parity is the name of the game in Division I, the small-school field offers no such mystery. The Sigonella Jaguars are the defending champions and the team to beat once again.

Sigonella returns most of the key players who fueled last year’s dominant run to the championship round, making the Jaguars a heavy favorite to extend their reign. They reinforced that perception in the regular season, taking just two losses over the course of a challenging divisional schedule and faring well against Italy’s upper-division opponents as well.

In-country opponent Aviano is the only Division II/III team to beat the Jaguars this spring, splitting a four-game season series with their southern rival. Rota, which finished third a year ago, also acquitted itself well against the champs, losing both of its matchups with the Jaguars by a single run.

Returning runner-up Hohenfels and 2018 semifinalist Spangdahlem will look to match or improve on their elimination-round showings of a year ago.