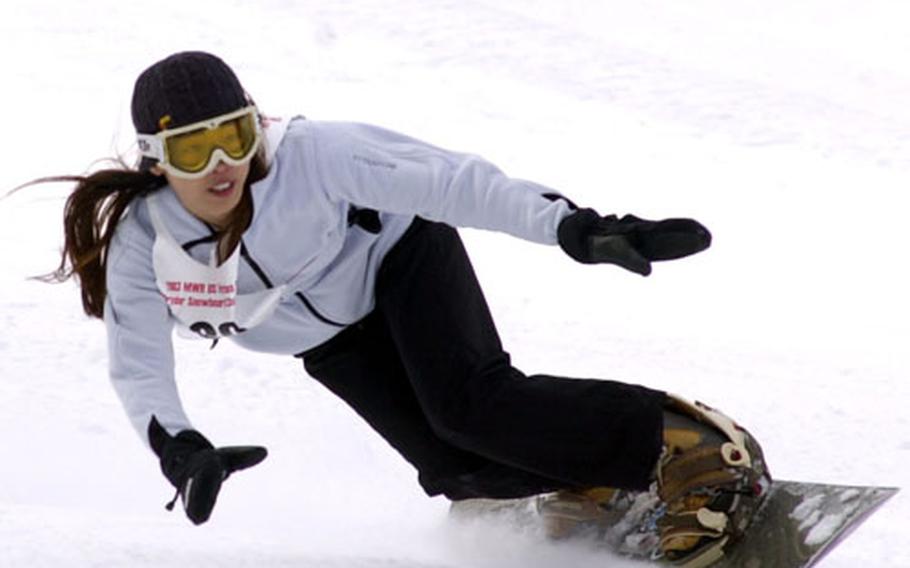 Marie Tucker of Aviano clears a gate as she rushes downhill at the 2003 U.S. Forces Europe Ski and Snowboard Series in Garmish on Saturday. Tucker was the fastest woman and one of the fastest overall with a two-heat combined time of 1 minute 50.29 seconds. (Michael Abrams / S&S)

Marie Tucker of Aviano clears a gate as she rushes downhill at the 2003 U.S. Forces Europe Ski and Snowboard Series in Garmish on Saturday. Tucker was the fastest woman and one of the fastest overall with a two-heat combined time of 1 minute 50.29 seconds. (Michael Abrams / S&S) 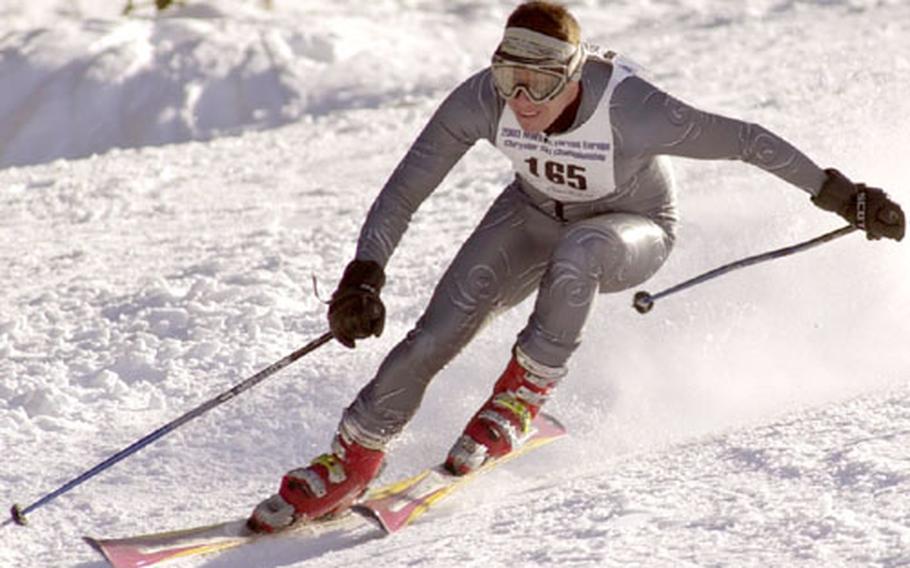 Mark Marchant races down the piste in the ski giant slalom event at the 2003 U.S. Forces Europe Ski and Snowboard Series in Garmish on Saturday. Marchant captured the Mens&#39; Military Masters class with a time of 1:32.44. (Michael Abrams / S&S) 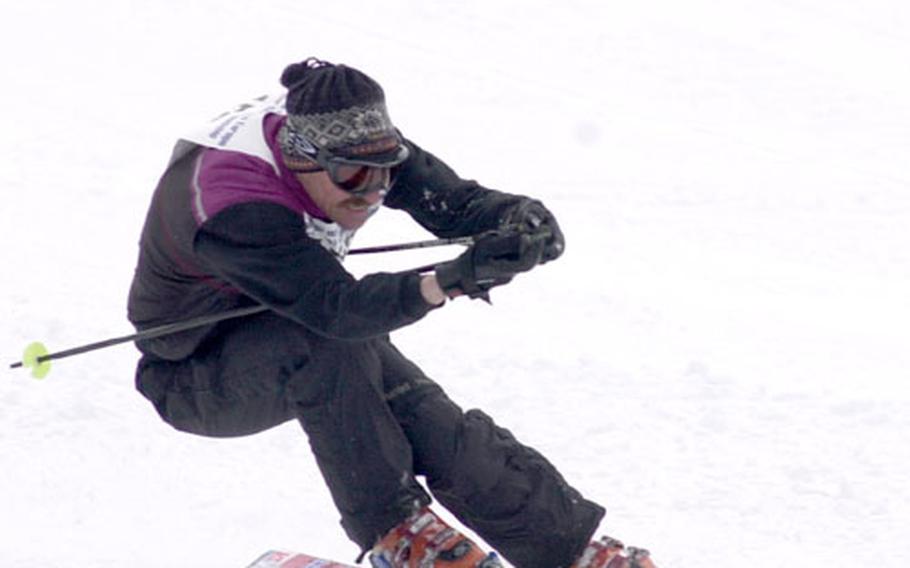 Leigh Plowman of Garmisch on his way to win the Pro Open division at the 2003 U.S. Forces Europe Ski and Snowboard Series in Garmish on Saturday. About 200 snowboarders and skiers are participating in the two day event on the Huasber slopes in Garmisch, Germany. (Michael Abrams / S&S)

GARMISCH, Germany &#8212; Karen Souders is not your typical snowboard racer.

In fact, the two runs Saturday in the U.S. Forces Europe giant slalom snowboard race by the 43-year-old wife and mother were her first in competition.

Souders was like a lot of the nearly 200 competitors who participated in the first day of the 2003 MWR/U.S. Forces Europe Ski and Snowboard Championship Series in that there was no typical competitor.

They included military personnel who skied aggressively, to entire families just beginning to snowboard, to adults who grew up skiing and snowboarding in the United States.

Like the others, Souders advocated that those who have never snowboarded or tried racing should.

The Garmisch meet is the second of the two-part championship series, with the first part last month in in Aviano, Italy.

On Saturday the giant slalom races were held for snowboarding and skiing. Sunday will conclude with a traditional slalom ski race and the overall ski winners &#8212; based on times from both days of racing &#8212; will be determined. There is no snowboarding the second day.

On Saturday, each contestant made two runs and the combined fastest time determined the winners. Some categories were combined if there were not enough entries.

Leah Kirkland, one of three women to compete in the military women ages 20-30 snowboarding category, had raced while growing up in Idaho.

Saturday was her fifth time snowboarding this year.

&#8220;There&#8217;s nothing better to do than be outside on a beautiful day like today,&#8221; said Kirkland, an Army sergeant who works in military intelligence and is stationed in Bad Aibling, Germany.

&#8220;The other two women were real good,&#8221; said Kirkland, who noted she had to slow down on the slalom course at times because the gates she needed to go through were nearly perpendicular. Racers who miss a gate are automatically disqualified.

Fear of missing the gate is what caused 22-year-old Army Spec. Luke Landreville to take it easy on the roughly half-mile course. He said he was cautious his first run and posted a time of 1 minute and 10 seconds. He sped up the second run but lost his balance and fell, completing his run in 1:27.

Landreville, who snowboarded extensively as a teen growing up in Colorado, moved to Bad Aibling a few weeks ago.

The popularity of the race series has grown tremendously in the past three years, director John O&#8217;Sullivan said Saturday.

It has been held for more than six years, but only in the last two has it been on a weekend. The result is more people, especially children, can race, he said.

Three years ago, O&#8217;Sullivan said, roughly 70 people competed. He predicted there would have been even more than the 200 on Saturday were it not for the ongoing war on terrorism and the U.S. military buildup in the Middle East for a possible war with Iraq.

He said it takes about two dozen people from Armed Forces Recreation Centers, Outdoor Sports and Recreation and the Garmisch Area Support Team to put the ski weekend together. The AFRC staff set up the gates higher up on the mountain normally used for its ski and snowboarding programs.