Six stand out as DODDS-Europe Division I Championship nears 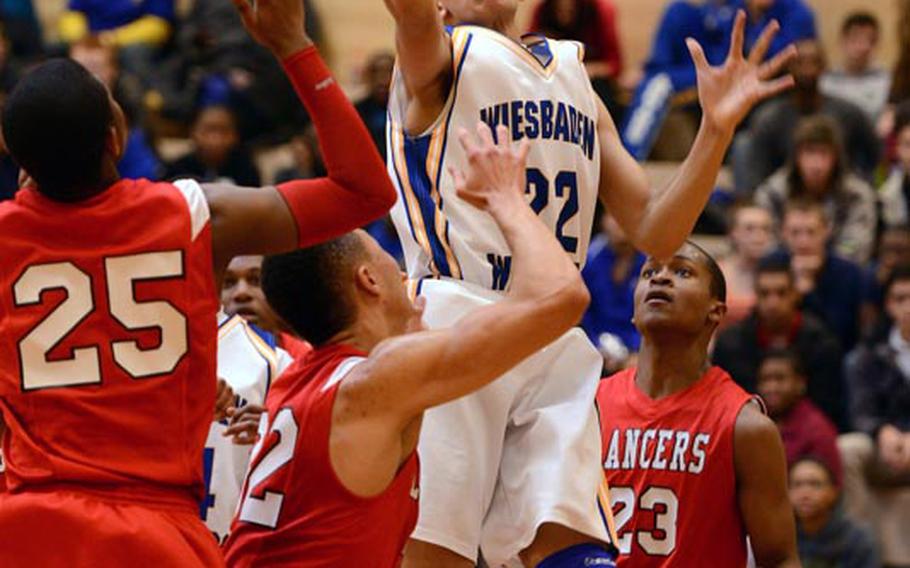 Wiesbaden's Kelsey Thomas gets between Lakenheath's Andre Bowser, left, and AJ Ransom for a shot in a January 19, 2013 game in Wiesbaden. The Lancers beat Wiesbaden 50-47. At far left is Albert Jones. (Michael Abrams/Stars and Stripes)

The DODDS-Europe Division I boys basketball tournament is shaping up to be an instant classic.

The raw materials of a top-flight playoff are in place. Several teams have flashed championship potential over the course of the season, but none has emerged as a clear-cut favorite. That brand of evenly-matched intrigue is the stuff of great postseasons.

Each is in action this weekend, offering one of the few remaining opportunities to evaluate the teams as they prepare for the European championships set for Feb. 20-23 at Wiesbaden.

The marquee matchup is undoubtedly between Kaiserslautern and Wiesbaden. Kaiserslautern (6-2) split two games with rival Ramstein over the past week and is looking to maintain the momentum built over the course of a breakout season. Wiesbaden (7-1) has played a primarily lower-division schedule, and its stock would rise considerably with a win over the Red Raiders.

Patch (8-1) soared to the top of the Division I power rankings early with blowouts of Ramstein and Kaiserslautern. But a loss to Lakenheath in the unofficial Stuttgart Winter Basketball Tournament and an equally surprising upset loss to Division III Bamberg has cost the Panthers some of their shine. A win Friday at Heidelberg (3-6), the proud defending champions battling against the effects of an ever-shrinking enrollment due to the school’s impending closure, could set things right.

Lakenheath and Ramstein, meanwhile, will get the opportunity to tweak their games against small-school opponents.

The Lancers (7-3) host Division III Alconbury on Friday and Saturday. The home-court games should offer the deep and talented team a chance to field a complete roster after travel issues kept some players out of road games at Ramstein and Wiesbaden.

Ramstein (4-2) is in the midst of a heavy season-ending schedule. Last year’s runner-up is incorporating several new players into its rotation, and a home-and-home set with Division III Baumholder on Friday and Saturday is a welcome chance to get court time for lesser-used players who might prove valuable in the postseason.

Only two regular-season weekends remain following this one. Look carefully this weekend, and you may notice a champion beginning to emerge.