Six-man football: almost half the players, but not half the fun 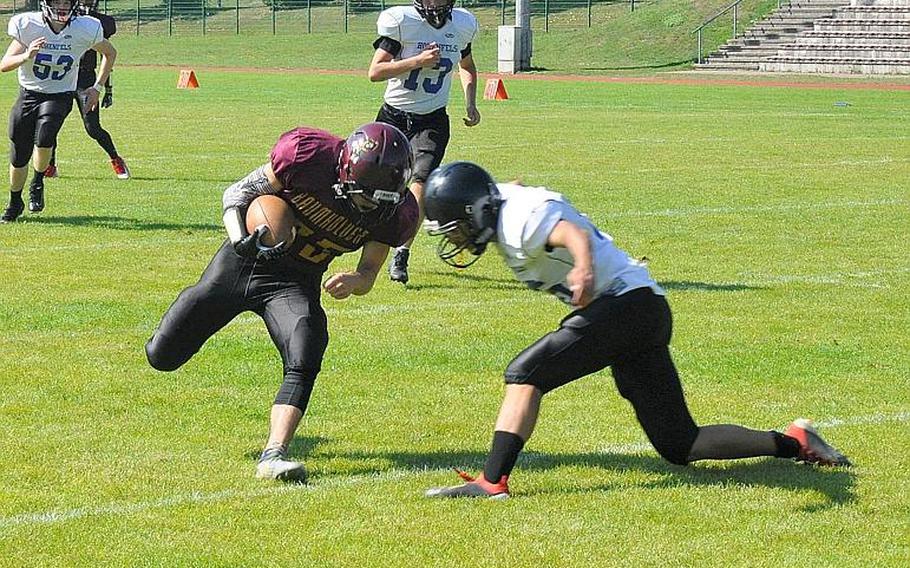 The six-man game appears to be the wave of the future in DODEA-Europe football, and those on the front lines are embracing it.

Now three weeks into its second season, DODEA-Europe’s Division III is trending positively. The league expanded from its inaugural group of five schools to seven this season with the relaunch of Alconbury’s defunct program and Spangdahlem’s transition from Division II. And coaches report a growing comfort level with the streamlined version of the game.

“The first season of six-man football was all about selling the students on the idea,” Baumholder coach Phillip Loyd said. “Many of the coaches, myself included, have been guilty of saying that six-man football is not real football, and this thought was prevalent with the students as well. So we had to work to change that perception.”

The six-man game’s wide-open style, described by more than one Division III coach as basketball on grass, can help in that regard. With a total of 10 less players on the field than in the conventional 11-man brand of football, the six-man game is far less physically daunting and offers more players opportunities to produce highlights in the open field.

“Six-man football is a very exciting brand of football,” Loyd said. “Everyone gets a chance to shine.”

That’s led to increased participation among students, along with the requisite permission from their parents.

“I think the parents watching our six-man games last year and this year feel the game is safer,” AFNORTH coach Greg Blankenship said, adding that this fall’s turnout among Lion freshmen and sophomores doubled in comparison to last season.

That kind of personnel boost can have a profound effect on a team. Hohenfels coach Richard Baker, after his Tigers pulled off a dramatic 21-12 comeback win over Baumholder on Sept. 14, said the improved depth was a big factor in that second-half surge.

“It’s great to have some people that we can sub,” said Baker, whose 2-0 team has already matched the program’s 2018 win total.

A year of experience with the six-man game has also improved the caliber of play, coaches said.

“Our players are pretty comfortable with the rules, the speed of the game, how much more space there is even though the dimensions of the field are narrowed,” Brussels coach Tim Mobley said.

Division III surpassed Division II in terms of participating schools this fall, with seven to Division II’s five. Sigonella, a Division III power in nearly every sport outside of the gridiron, is a candidate to join the football ranks soon, and the smaller programs in Division II may eventually be drawn to the six-man game’s lower barrier to entry depending on their student populations in coming years.

If they can get over the mental hurdle separating six-man from 11-man football, any future members of Division III might be surprised at the game they find.

“The league is getting more competitive and so much fun to coach,” Blankenship said.