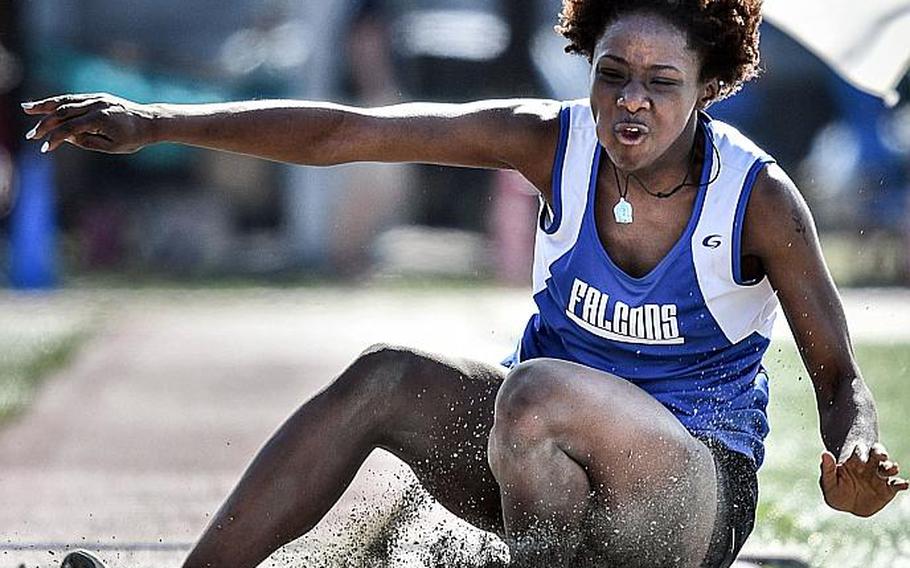 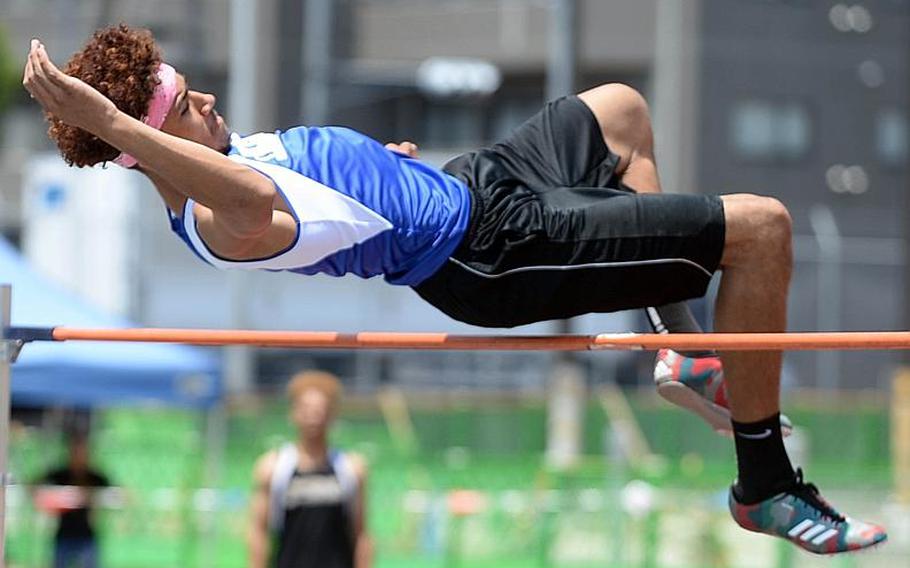 Brianna Hunter, a senior, breaks her own Pacific record and sets a new Far East meet record with a shot put of 12.97 meters on Day 1 of the Far East Track and Field Meet. Her previous best was 12.33 set on March 25 at the same Yokota venue. JACK HIGBEE/SPECIAL TO STRIPES () 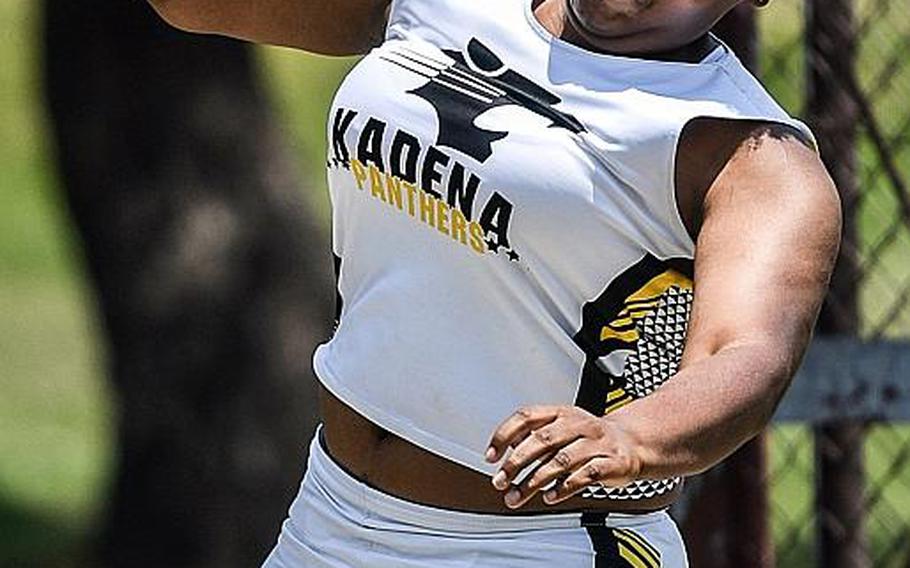 Kadena sophomore Nikeria Albritton briefly held the Pacific and Far East meet record in the shot put with a throw of 12.45 meters on her second attempt on Day 1 of the Far East Track and Field Meet. Her throw was eclipsed by Robert D. Edgren senior Brianna Hunter, who tossed it 12.97 meters. JACK HIGBEE/SPECIAL TO STRIPES () 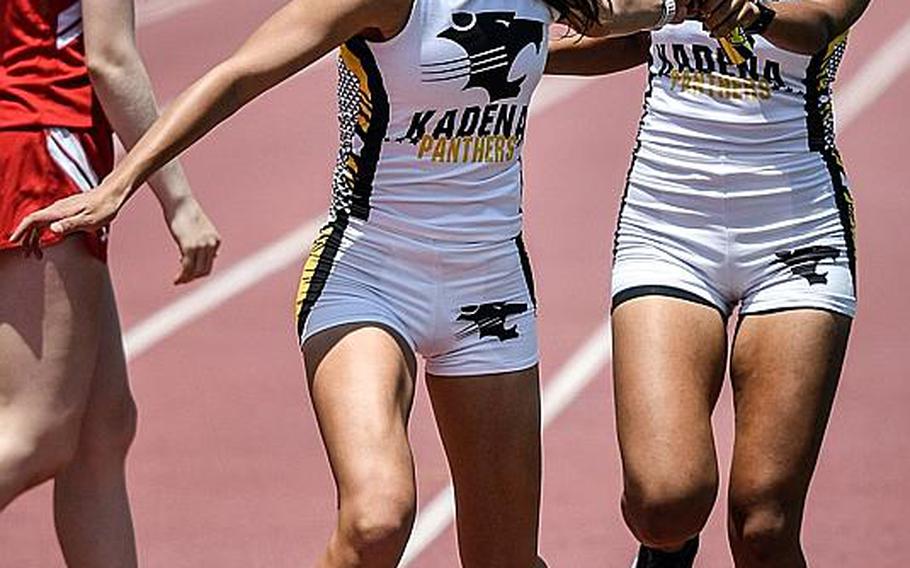 Kadena senior Wren Renquist takes the baton from junior teammate Mayumi Webb to run the anchor leg of the girls 3,200-meter relay on Day 1 of the Far East Track and Field Meet. The Panthers broke the three-year-old record in the event. They were timed in 10 minutes, 1.84 seconds, better than the mark of 10:02.21 set in 2014 by American School In Japan. JACK HIGBEE/SPECIAL TO STRIPES () Zama senior Tasia Nelson runs the anchor leg toward the finish of the girls 400-meter relay in the Far East High School Track and Field Meet. The Trojans ran 48.74 and broke the 5-year-old meet record of 49.17 set in 2012 by Kadena. DAVE ORNAUER/STARS AND STRIPES ()

YOKOTA AIR BASE, Japan – Brianna Hunter was worried and frustrated as she approached her third shot-put attempt on Monday’s first day of the Far East track and field meet.

The Robert D. Edgren senior exploded onto the Pacific scene with a region record-breaking throw of 12.33 meters on March 25 at Yokota. But she’d only come within a third of a meter of that mark in three meets after that.

Worse, after two attempts Monday (she scratched on the second), Hunter found herself trailing Kadena sophomore Nikeria Albritton, who broke Hunter’s record with a throw of 12.45 meters.

Better put this to rest, Hunter said she told herself. She followed with a record-shattering 12.97 on her next-to-last attempt, putting Albritton and the old Pacific Far East meet records well behind her.

It was one of four Far East meet records and the lone Pacific record to tumble on the first day of the two-day meet. But Hunter confessed to worry that her record throw might never come.

“It was crazy. Honestly, I felt like I was going to pass out if I didn’t throw farther than I had” in March, said Hunter, adding that she practiced hard the last two weeks between the last regular-season meet and Far East. “I’m happy,” she said.

While Hunter said she was well aware of the distances at stake with her throws, Seoul American junior Alyse Neal said she had no idea she’d broken the Far East meet long-jump record with a leap of 5.30 on her second attempt.

On the track, two Far East relay records fell, one by Zama in the 400-meter relay qualifying and the other by Kadena in the 3,200 relay final.

“They ran the best they’ve run all season. You can’t be more proud than that,” Panthers coach Maureen Taylor said.

The feat surprised Bills, who came to Far East with a head cold. “I’m really happy for my team,” Bills said. “We got together, did what we expected and we executed.”

The Trojans foursome ran 48.54 in last Tuesday’s Kanto Plain finals, then on Monday they were timed in 48.74, securing the top seed in Tuesday’s Division II 400-relay final.

The Far East meet concludes Tuesday with boys shot put and long jump, girls high jump and discus and running events in both Divisions I and II.