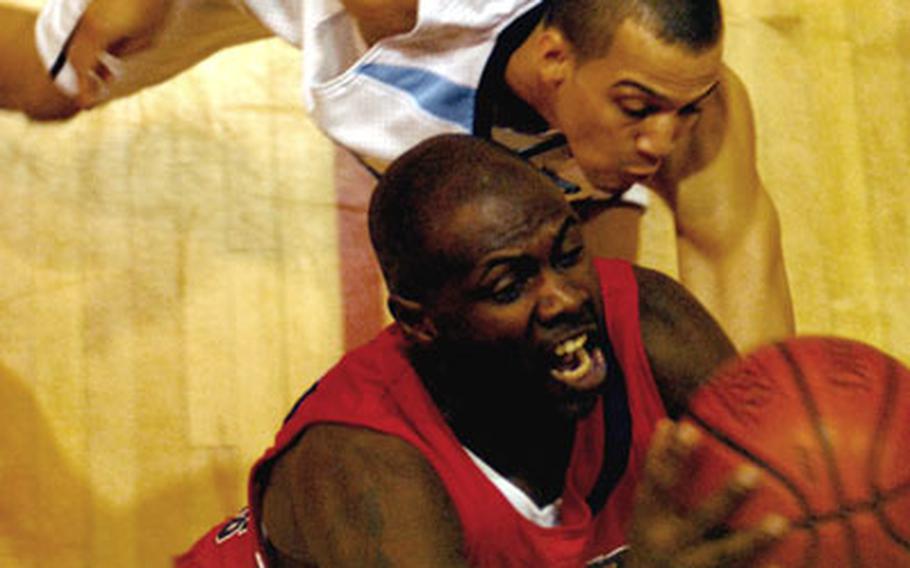 James Williams of the Osan Defenders drives to the basket past David Cornelius of the Yongsan Runnin&#39; Rebels during Wednesday&#39;s men&#39;s championship game. (Dave Ornauer / S&S)

James Williams of the Osan Defenders drives to the basket past David Cornelius of the Yongsan Runnin&#39; Rebels during Wednesday&#39;s men&#39;s championship game. (Dave Ornauer / S&S) 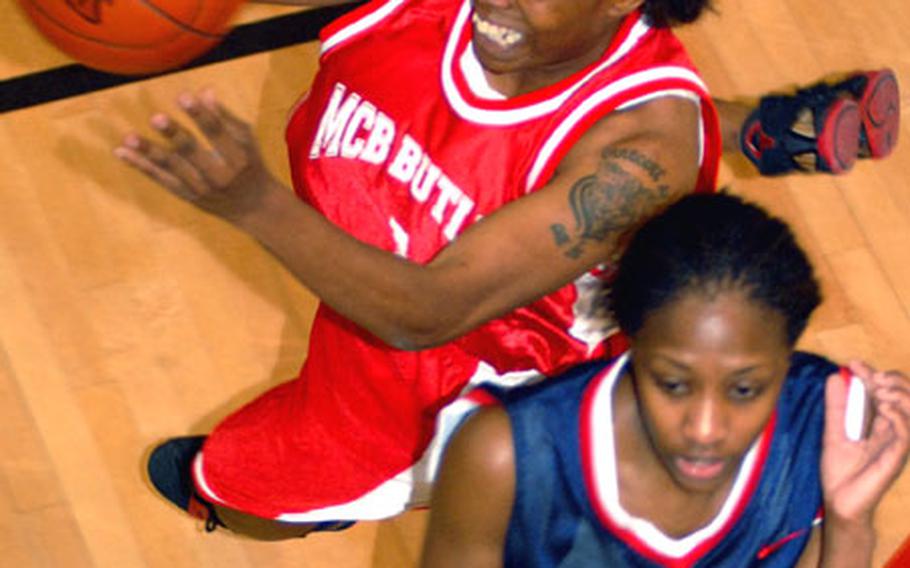 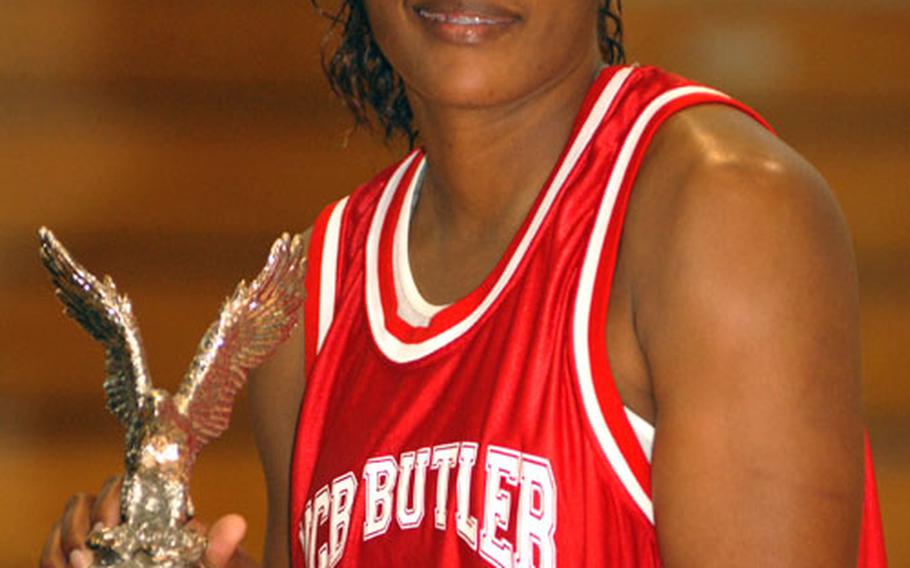 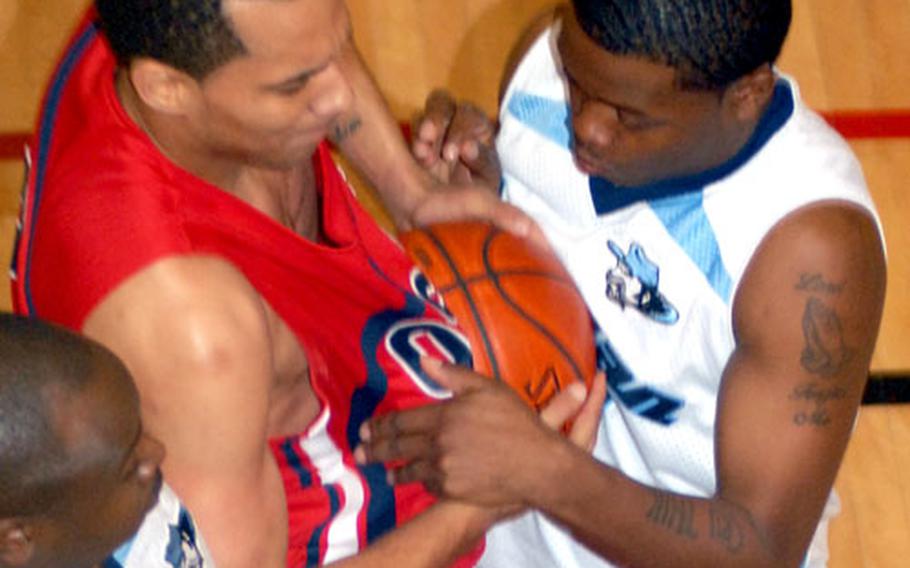 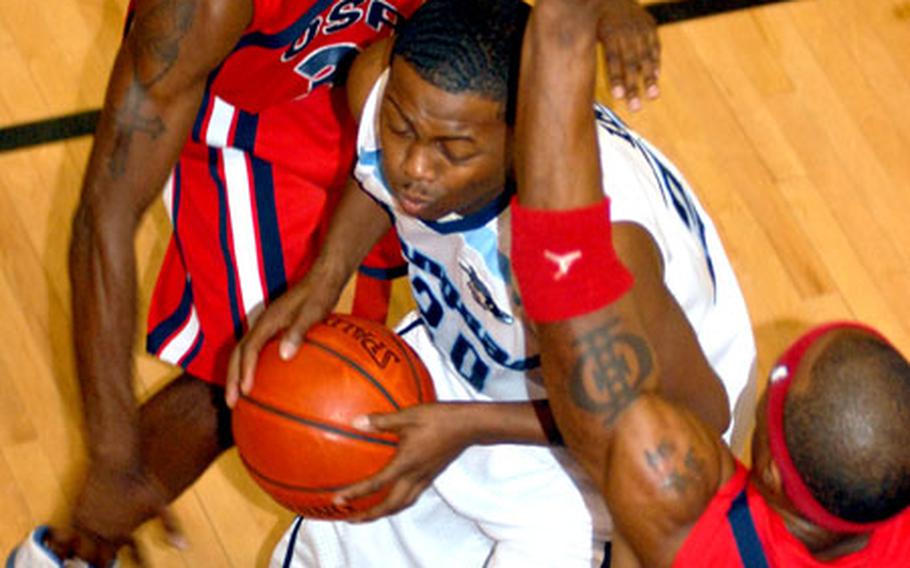 OSAN AIR BASE, South Korea &#8212; Perhaps the most unsung player on the Okinawa Mystics roster hit the key shot when it counted most.

Tachaka Moore&#8217;s driving shot in the lane with 8:25 left made the score 58-57, putting the Mystics ahead to stay as they rallied from an 11-point first-half deficit to beat the host Osan Defenders 78-72 in Wednesday&#8217;s championship game of the 20th anniversary Pacificwide Open Holiday Basketball Tournament.

Not a bad feat for a team of just five players who&#8217;d only been practicing together for three weeks and limped into the title game nursing various muscle pulls, bumps and bruises.

Of those seven titles, Jones counted this one as perhaps the most stunning &#8212; unlike the Mystics&#8217; pedigreed players, not one Defender has an All-Air Force or All-Armed Forces berth to his credit.

Women&#8217;s championshipOkinawa Mystics 78, Osan Air Base 72: Defenders guard Jessica Dean got hot from outside, hitting three straight three-pointers as Osan scored 19 straight points to lead 25-14 with 8:30 left before halftime. Despite the deficit and with former All-Marines April Moss and Coco McCray in foul trouble, there was &#8220;never a doubt&#8221; the Mystics could rally, Crawford said.

In a game that featured seven lead changes and six ties, the Mystics opened the second half with seven straight points to go up 42-40. The lead then seesawed until Moore &#8212; the only player of the five having never won this tournament or gone to an All-Armed Forces tournament &#8212; put the Mystics ahead for good.

For one half, the Defenders succeeded in their strategy of spreading the Mystics defense with the perimeter game &#8212; Osan hit 10 three-pointers, with Dean scoring six alone &#8212; and double-teaming Crawford.

All five Mystics players scored in double figures. Dean had 20, as did Bobbie Chaves. Reed added 15.

Men&#8217;s championshipOsan Air Base 85, Yongsan Garrison 65: The Runnin&#8217; Rebels led briefly in the first eight minutes, until Gareth Davis hit two foul shots, giving the Defenders a 13-12 lead they would not relinquish with 11:07 left until halftime.

Osan still couldn&#8217;t pull away until midway through the second half. Inspired by a home crowd of more than 500, the Defenders steadily increased the margin in the closing minutes. Matt Wireman&#8217;s two foul shots with 25 seconds left gave Osan its biggest lead, 85-62.

James Williams led the Defenders with 26 points, 18 in the second half. Greg Wilson of Osan was chosen as tournament MVP. Kendre Fletcher topped the Rebels with 17.