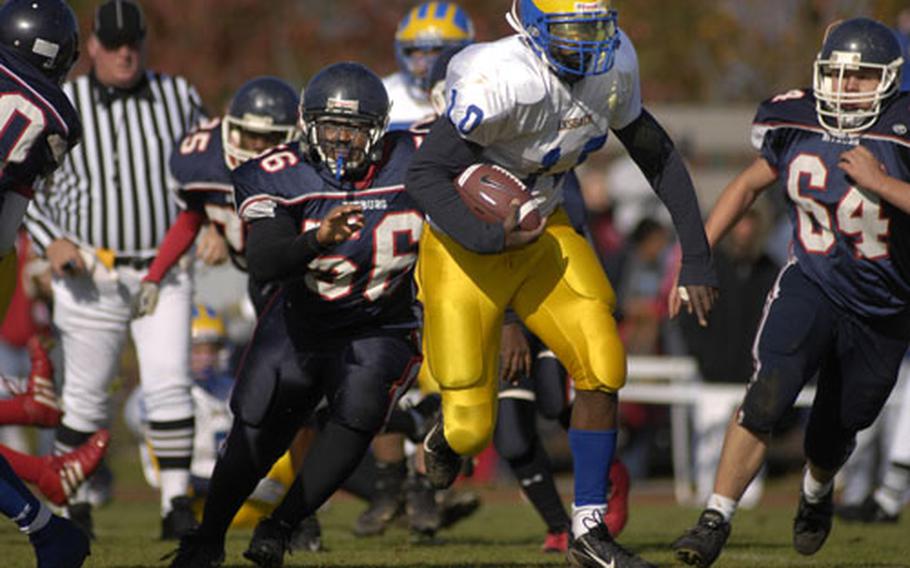 Xavier Sheppard, a senior from Ansbach High School pulls away from Terron Geter and Alex Rodriguez of Bitburg for his second touchdown run in the first half Saturday at Bitburg. Ansbach defeated Bitburg 38-8. (Ben Bloker / S&S)

Xavier Sheppard, a senior from Ansbach High School pulls away from Terron Geter and Alex Rodriguez of Bitburg for his second touchdown run in the first half Saturday at Bitburg. Ansbach defeated Bitburg 38-8. (Ben Bloker / S&S) 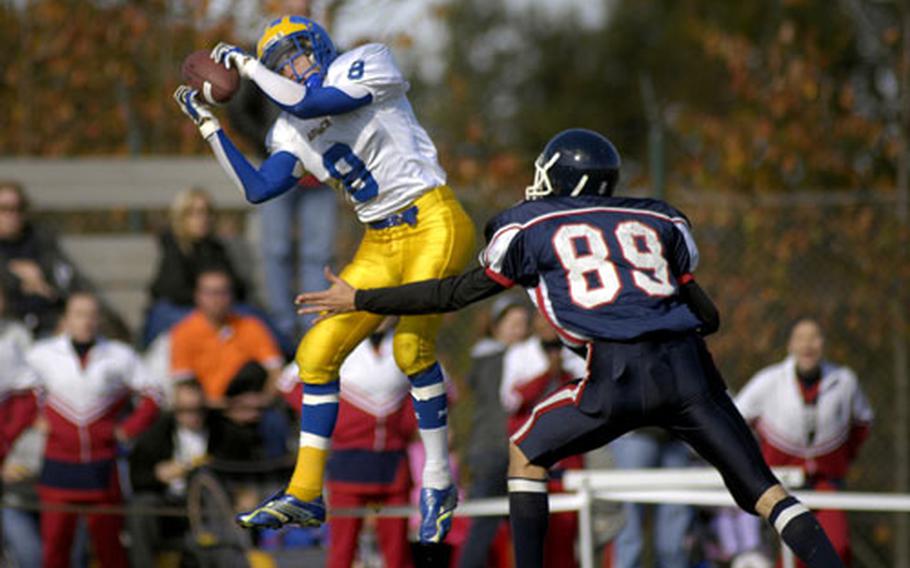 Ansbach senior Thomas Graham makes a huge reception over Jordan Thomas of Bitburg early in the first quarter, setting up Ansbach for its first touchdown. Both teams came into the game undefeated in Div II. Sheppard had 3 touchdowns on 12 carries for 109 yards. (Ben Bloker / S&S) Jiamine Kimbell, an Ansbach senior, grabs a pass for a touchdown over Bitburg defender Terry Johnson in the third quarter. Both teams have clinched playoff berths. (Ben Bloker / S&S)

Ansbach&#8217;s Xavier Sheppard, a senior running back, scored three times in the first 14 minutes and finished with 109 yards rushing on 12 carries for the Cougars, who racked up 298 yards, most of them on the ground.

Bitburg was held scoreless until a TD late in the fourth quarter. The Barons played without top running back Anton Harris, who was out with a sprained ankle. Last week, Harris scored all three Bitburg TDs in a come-from-behind victory, running for 255 yards on 38 carries.

Ansbach (6-0) already had clinched the Division II-South title. Bitburg (5-1) is the II-North champ.

In the first round of the playoffs next Saturday, Ansbach will host Wiesbaden and Bitburg is at home against Naples.

Ansbach scored on its first possession. Sheppard showed some nifty moves on a 16-yard touchdown run at the 5-minute mark. The score was set up by a 36-yard pass from quarterback John Willis to receiver Thomas Graham. A two-point conversion made it 8-0.

A few plays later, Graham intercepted a Bitburg pass on the Barons&#8217; 43. On the first play of the ensuing possession, Sheppard took it all the way for a TD, followed by another two-point conversion.

Sheppard scored his third TD at 10:18 of the second quarter, this time on a 16-yard pitch play. The conversion made it 24-0.

The Cougars scored once more before halftime when junior running back Shane Williams ran it in from 12 yards out with 3:46 remaining.

&#8220;I thought we executed about as best as we could in the first half,&#8221; Ansbach coach Marcus George said.

The onslaught continued in the second half. On its first drive, Ansbach&#8217;s Willis, who was 3-for-11 passing for 72 yards, hit receiver Jiamine Kimbell on a well-thrown 18-yard pass for a TD. The subsequent two-point conversion made it 38-0.

Bitburg avoided the shutout, scoring with 2:42 remaining. The Barons capped a long fourth-quarter drive with a 5-yard touchdown run by Brandon Pitts. Pitts ran in the two-point conversion for the final score.