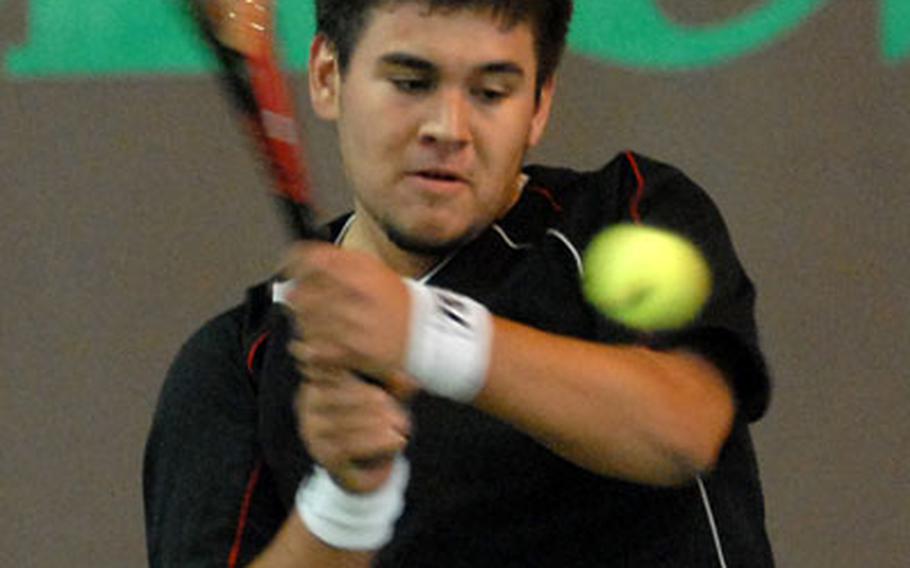 Defending boys champ Nick Garcia of Heidelberg returns a shot from Ramstein&#39;s Sean Stokstad in the championship match at the 2007 DODDS-Europe tennis finals in Wiesbaden-Nordenstadt, on Saturday. Garcia defended his title with a 6-4, 6-2 win. (Michael Abrams / S&S)

Defending boys champ Nick Garcia of Heidelberg returns a shot from Ramstein&#39;s Sean Stokstad in the championship match at the 2007 DODDS-Europe tennis finals in Wiesbaden-Nordenstadt, on Saturday. Garcia defended his title with a 6-4, 6-2 win. (Michael Abrams / S&S) 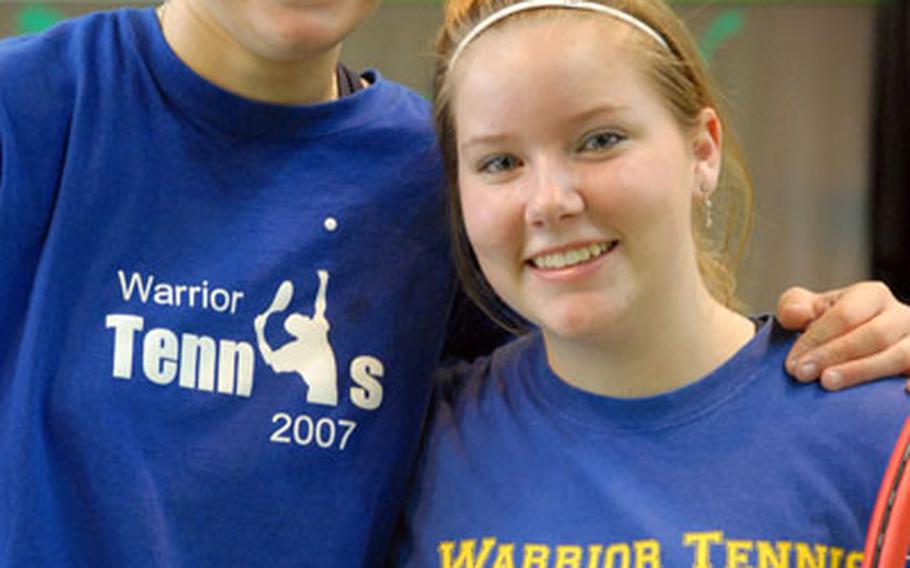 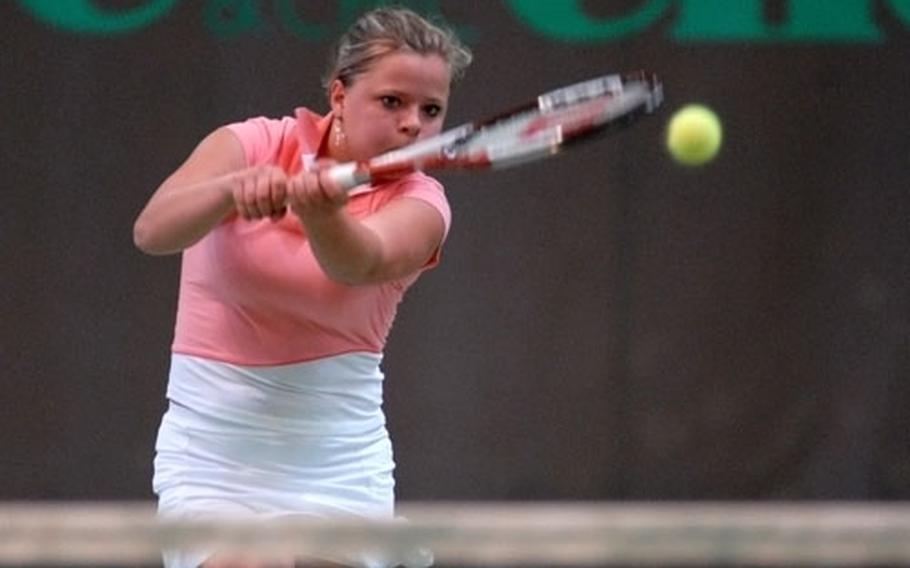 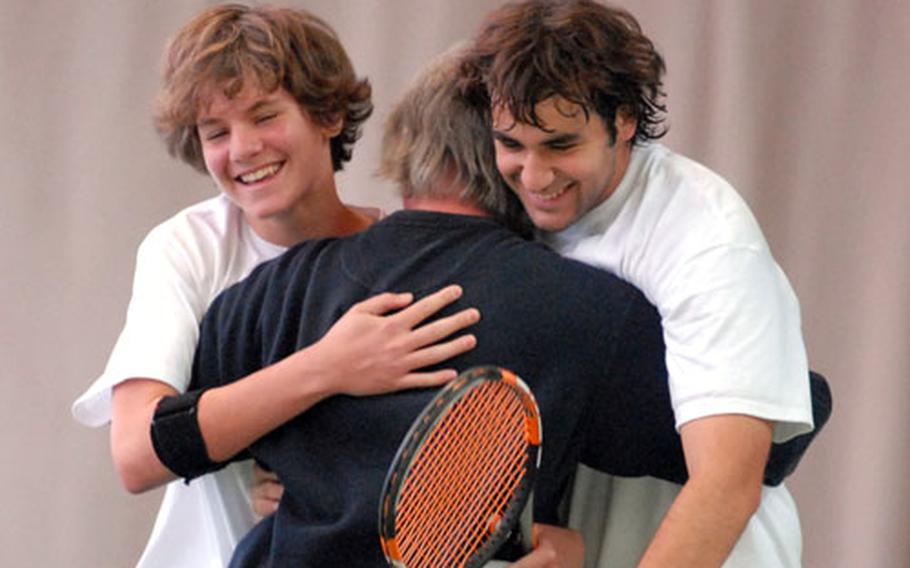 WIESBADEN-NORDENSTADT, Germany &#8212; By normal measure, the two games SHAPE&#8217;s Krista Citkovska dropped to International School of Brussels&#8217; Kara Williamson in the girls singles final on Saturday should have been considered insignificant.

Under normal circumstances, the six games Nick Garcia lost to Sean Stokstad would barely be worth mentioning.

But Citkovska hadn&#8217;t lost a game all year, and until the semifinals of the DODDS-Europe tennis championships on Friday, Garcia hadn&#8217;t either.

So even though Williamson and Stokstad didn&#8217;t win, the minor blows they dealt to the two most dominant players in the tournament nearly overshadowed the day&#8217;s biggest upset, in which Ramstein&#8217;s seventh-seeded boys team of Eric Radvany and Clay Marquardt stunned the top seed, International School of Brussels&#8217; Brady Covington and Shota Morisaka, 6-2, 6-4.

Nearly. But not quite.

After dominating the first set, Marquardt and Radvany were down 4-0 in the second.

Marquardt already was setting himself up mentally for a third set, he said, but that wasn&#8217;t necessary. The duo won the next six games for the title.

In the girls doubles final, sixth-seeded Nancy Jensen and Jessica Smith of Wiesbaden easily handled the fifth-seeded team, AFNORTH&#8217;s Heather Acre and Melanie Seitz, 6-3, 6-1. It was a sweet victory for Jensen, who lost in last year&#8217;s grueling, three-set doubles final against Ramstein.

The two appeared almost casual as they hit volleys and banged winners through narrow gaps in AFNORTH&#8217;s defense.

Citkovska, the most dominant player in the tournament, wasn&#8217;t nearly as relaxed.

Despite having beaten Williamson at love in their last meeting, Citkovska said she was nervous going into the first set. No opponent had won a game off her since last year&#8217;s finals, when she lost one game, and she seemed anxious that Williamson might be able to tarnish that record.

In the first set, Citkovska and Williamson battled in rally after rally, neither moving far from the baseline. Citkovska&#8217;s almost infallible ability to keep the ball in play &#8212; not her talent for running her opponent all over the court &#8212; helped her dominate.

Williamson was, however, able to get one game off Citkovska in each set, both off winners.

Garcia had beaten him at love a week earlier, but Stokstad prepared better mentally for the championship match.

Stokstad kept it close in the first set, which Garcia won 6-4. Both relied heavily on their serves, and both admonished themselves for their own errors.

&#8220;I could have played better,&#8221; Garcia said after the match, adding he might have gone in a bit too relaxed, and that he was upset about the number of games he dropped to Stokstad.

Still, he kept Stokstad on his toes throughout the match.