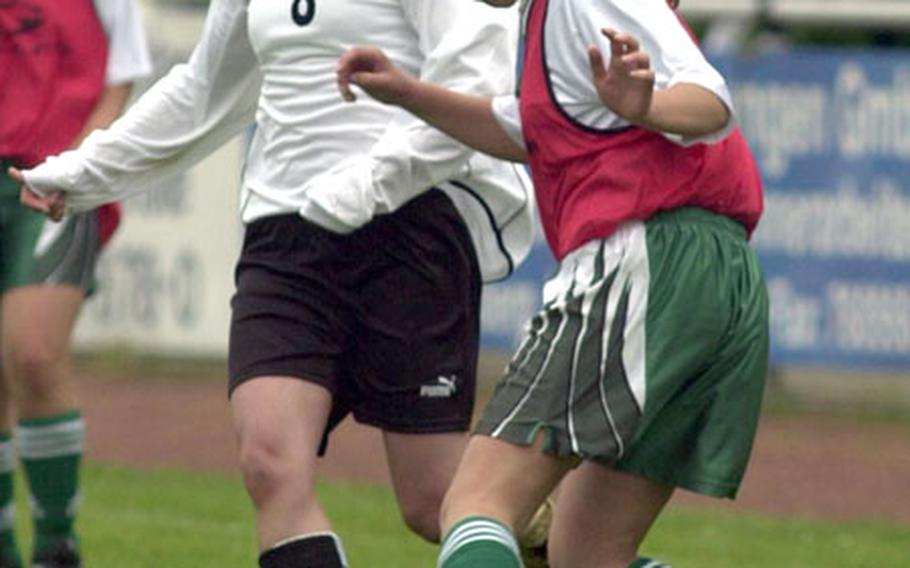 Superstitious Patch coach Tom Manuel isn&#8217;t crowing about past successes or boasting of upcoming ones.

This season, Manuel&#8217;s team will be led by All-Europe first-teamer Haley Mitchem, along with Brianne Gemeinhardt.

If Patch finally loses to an American team this season, it might be to SHAPE.

If that weren&#8217;t enough, Whitehurst also can call on freshmen Whitney Taylor and Nicole Fox, &#8220;who could have been varsity players as eighth-graders.&#8221;

AFNORTH was the conference runner-up last season, and coach Bonnie Bauer has back a solid nucleus in keeper Claire Ward, midfielders Janessa Harmtan and Laura Rivera, all seniors, and junior forward Annika Carlson.

Mannheim coach Greg Lanier is in a similar position, with co-captains Elise Cobb, a midfielder, and Crystal Rios, a striker, at the core of a 21-player squad, two-thirds of which are freshmen.

A newcomer at Vilseck has Robert Lowe enthusiastic about his team. Senior Sabrina Tate, a track star, is playing soccer for the first time. And she&#8217;s doing it brilliantly, Lowe said, adding that she has &#8220;amazing skills."

Black Forest Academy will have to overcome turnover problems, although junior wing Christina Rempel provides a solid foundation for a program that has improved steadily since joining the league in the mid-1990s.

At Hanau, returning goalkeeper Kyrie Bye-Nagel and midfielder Patricia Foster have put the basketballs away for another year and returned to the field.

Heidelberg also is riding a title streak, having won the last two European Division I tournaments. But the Lady Lions must plug the holes left by last year&#8217;s three All-Europe players.

Building on that core are newcomers such as freshman wing Katrina Durden and halfback Michelle Aguila, a regional championship basketball star.

As in the past, Naples should find Aviano its strongest competitor.

Still, Hillestad said, she has the defensive talents of sweeper Jessi Campfield and midfielder Megan Engelhardt, who has been honing her skills in the rapidly expanding Italian female leagues.

Milan and the American Overseas School of Rome, though, aren&#8217;t expected to be hardy contenders. Vicenza, too, found the going tough last season, landing a lone player on the all-conference squad. But the Cougars will be looking to improve on that this season.

A challenge to what had become a strictly Aviano-Naples rivalry, however, could come from Marymount International of Rome, which won two straight titles in 1999 and 2000 and is returning to prominence this season, according to Hillestad.

In addition, Shawn McCarthy of Sigonella plans to muscle into that battle.

McCarthy said his Jaguars, always plagued by numbers and turnover, will try to mold a winner by incorporating their 12 freshmen around their &#8220;great player&#8221; Christina Schumacher and returnees Whiney Morrell and Katrina Matti, who spent last summer at soccer camp in the States.

McCarthy said his team also will benefit from the completion of a second field at Sigonella. It will allow the team to practice on a full field and work on the transition game for the first time. &#8220;Before, we had the boys and girls, 50 players, on the same field. The boys worked at one end and the girls at the other.&#8221;

North of the Alps, 2002 Division III tournament teams Ansbach and Hohenfels will be facing challenges from Baumholder, Brussels, Bamberg, Bad Aibling and Giessen in the single-region race.

Quantity and quality are the story at Ansbsach, said coach Bruce Satterlund, who expects four freshmen to make his 27-player varsity squad.

Kathy Clemmons&#8217; Hohenfels Tigers will be a year older than the young team that went to Europeans last season. Back to try again are All-Europe forward Melanie Cloy, along with midfielders Beth Macintire and Michelle Bonneau and forward Whitney Clemmons.

In Giessen, Edwina Smith will be relying on her defense, manned by stopper Aiana Garin, all-conference midfielder Amellis Peart, fullback Courtney Hernandez and goalkeeper Erika Hill to hold the fort for her young team, which benefits from the return of III-North tourney MVP Janelle Anderson.

Bamberg, too, is very young, where Everlitis Rivera, a sweeper, and midfielder Michelle Clubb are the only experienced seniors, said coach Anita Hunt.

Bad Aibling will rely on midfielders Katrina Preston and Rachel Reese, along with goalkeeper Leann Cruz and defender Debbie Jackson for its new-look squad.

Brussels will play for the conference title before splitting off to battle Menwith Hill, Iceland, Lajes and Rota in the Division III-North qualifying tournament, which determines the two teams advancing to Europeans.