Several teams in the hunt for a title 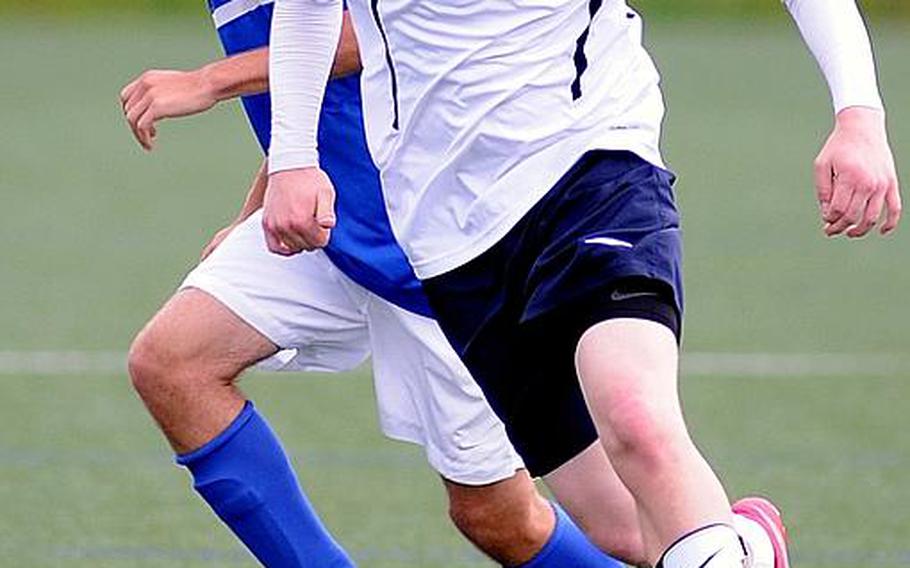 Menwith Hill's Schuyler Backlar gets past Incirlik's James Miller in a Division III game at the DODDS-Europe soccer championships Monday. Backlar scored all Menwith Hills' goals in its 3-2 win over the Hodjas. (Michael Abrams/Stars and Stripes)

Menwith Hill's Schuyler Backlar gets past Incirlik's James Miller in a Division III game at the DODDS-Europe soccer championships Monday. Backlar scored all Menwith Hills' goals in its 3-2 win over the Hodjas. (Michael Abrams/Stars and Stripes) 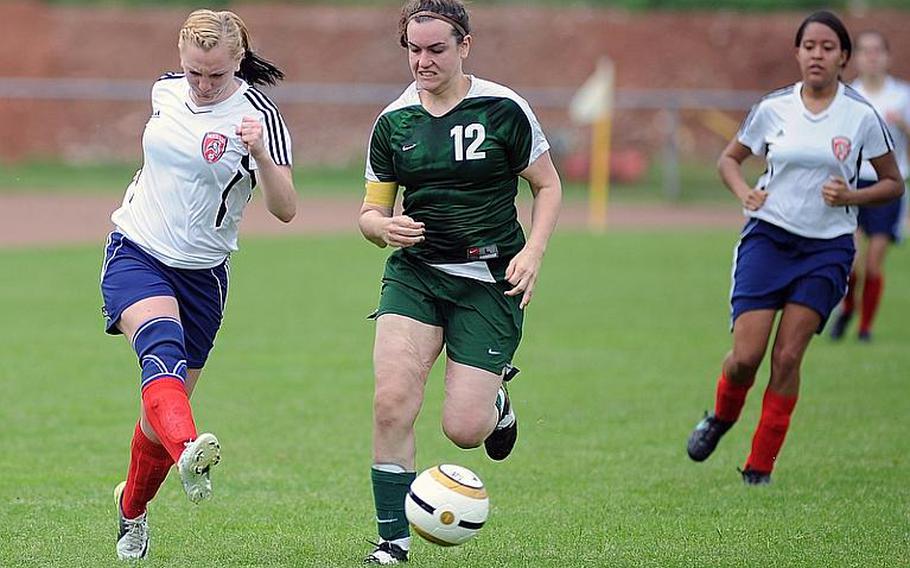 LANDSTUHL, Germany - One thing was for certain coming into Monday&rsquo;s opening games of the Division III DODDS-Europe soccer championships. The field&rsquo;s wide open.

After the final whistle blew on Monday, a day that featured eight D-III boys games and three small-school girls games, it was clear that several teams have a shot at the title.

The 10 boys teams have a pool-play-with-crossover semifinals format and the six girls squads play a round-robin during the first three days of competition.

In boy&rsquo;s action Monday, it was the Menwith Hill Mustangs playing the role of Cardiac Kids, as they were involved in two of the more exciting matchups of the day.

&ldquo;You guys have got to play with urgency here,&rdquo; Incirlik coach Chris Anderson barked to his squad from the sidelines after falling behind 2-0.

That&rsquo;s when Backlar took a cross and powered it into the goal for the game winner.

&ldquo;In practice, I miss that shot so many times over the bar,&rdquo; Backlar said after the contest, already thinking ahead to his squad&rsquo;s next matchup against third-seeded Brussels, a team that bested the Mustangs 2-0 earlier this month.

Monday&rsquo;s rematch featured highlight worthy plays on offense and defense from both sides, but each team&rsquo;s defenses stepped up the pressure and kept the scoreboard empty.

Defending boys champion Sigonella, this year seeded second, looked prime to repeat on Monday, as they downed Bamberg by a score of 5-1.

Sophomore Alessandro Thomas, who scored three goals on the day, said the Jaguars key to victory was getting a lot of shots off.

Top-seeded Alconbury made quick work of the overmatched but scrappy Lajes team, earning a 6-0 victory in the Dragons&rsquo; only game of the day.

In girls action, the seeding held true as the top three seeds each came away with a shutout victory over their opponent.

Defending champion Rota, seeded third this year, opened up its quest for a fourth consecutive title by downing fourth-seeded Sigonella 1-0.

After dominating possession and shots on goal throughout the game, the Admirals couldn&rsquo;t squeeze the ball into the net until senior Gabriela Rivera was in perfect position to knock in a bobbled ball by Sigonella freshman goalie Rachel Vosler.

&ldquo;I thought it was too perfect an opportunity,&rdquo; Rivera said. &ldquo;I had to tell myself to calm down.&rdquo;

&ldquo;It was really good to get this off our chest,&rdquo; McVicker said about the first game of the championships.

The first girls game of the day featured second seed Menwith Hill, which defeated Alconbury, 2-0. The game was scoreless at half, but Menwith Hill was able to get the bounces going its way in the second half.