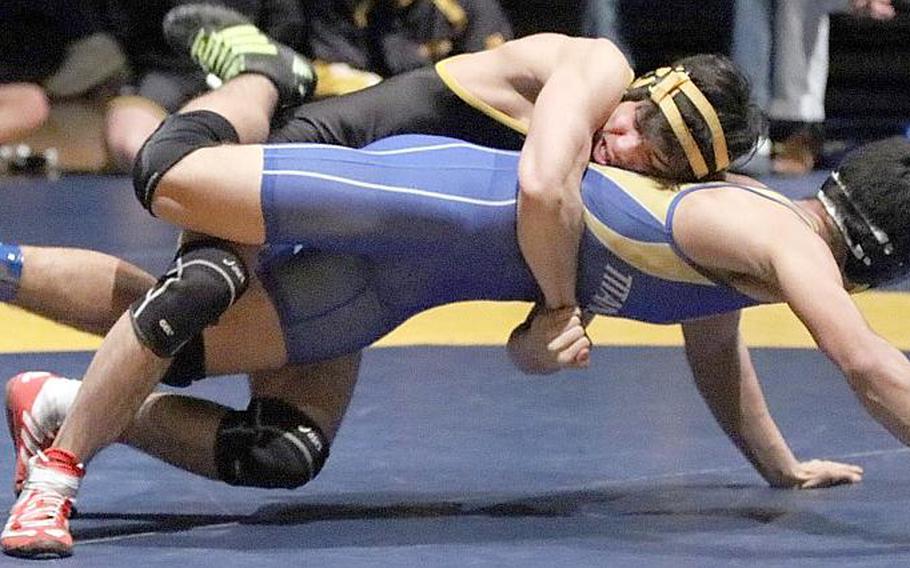 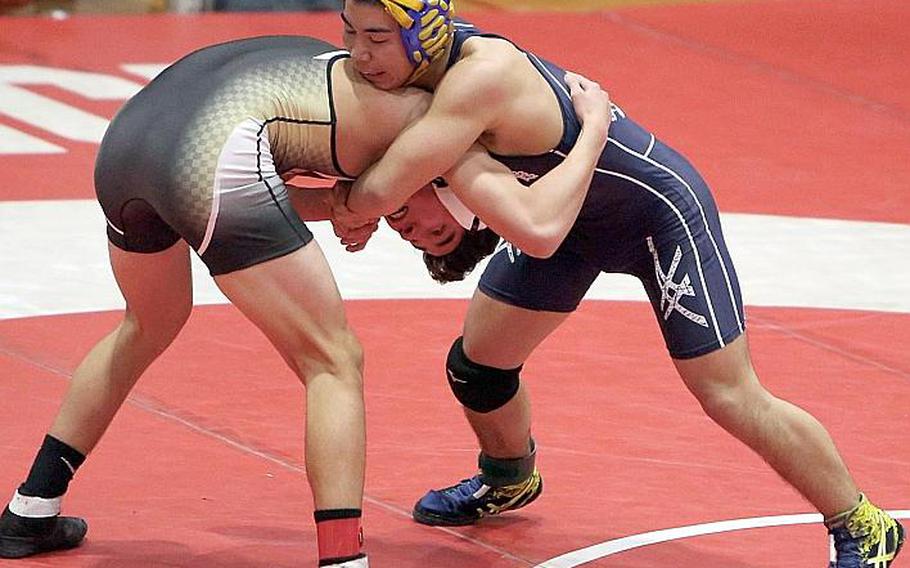 Humphreys' Will Allen, the "Beast" runner-up at 135 pounds, is considered a favorite to win the weight class at Far East. (Sheila Suckart/Special to Stripes) 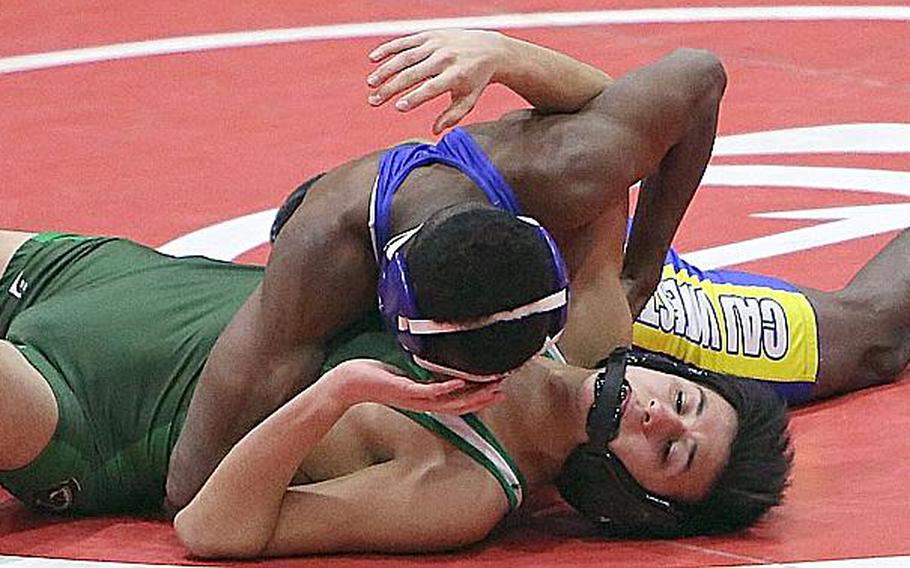 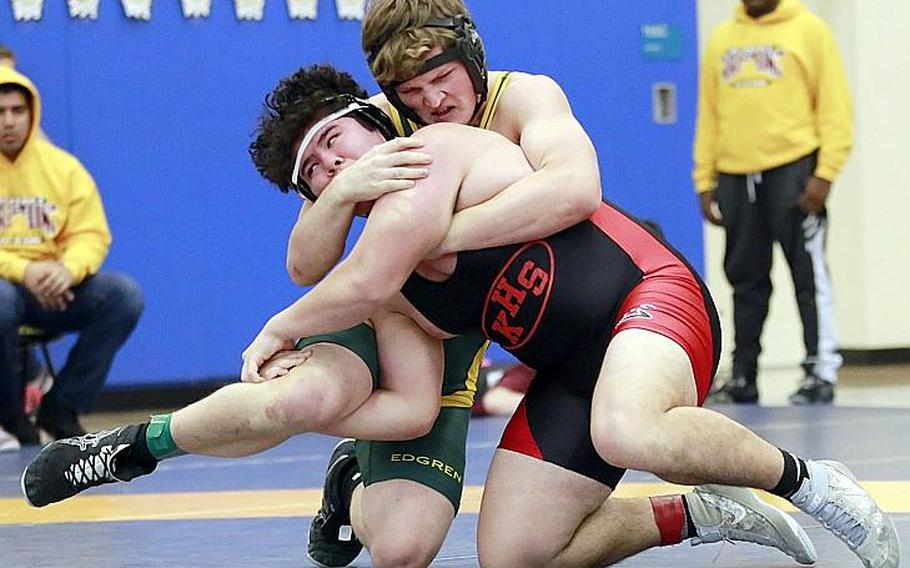 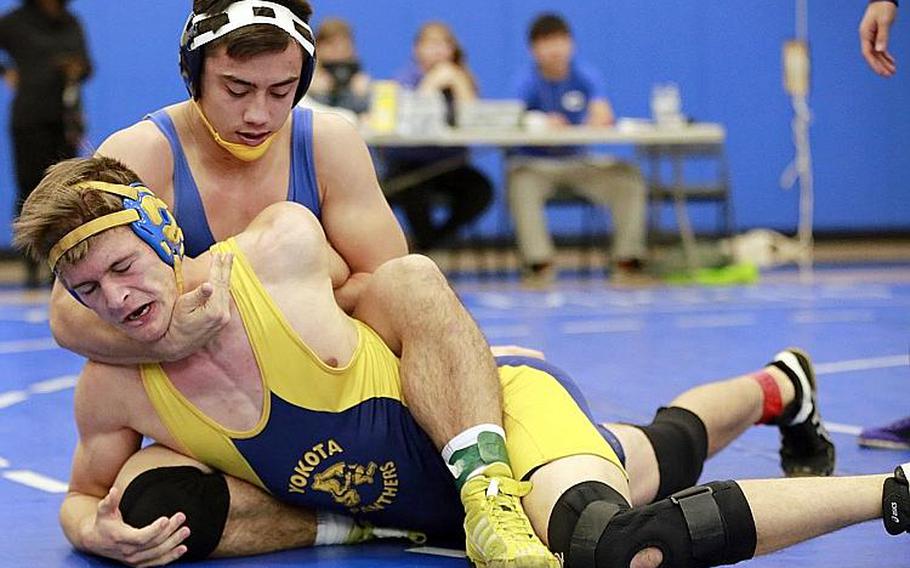 St. Mary's Austin Koslow and Yokota's Austin Fisher finished 1-2 in both the Beast of the Far East and the Kanto finals and are considered odds on to chase the Far East 180-pound title. (Emma Stevens/Special to Stripes) 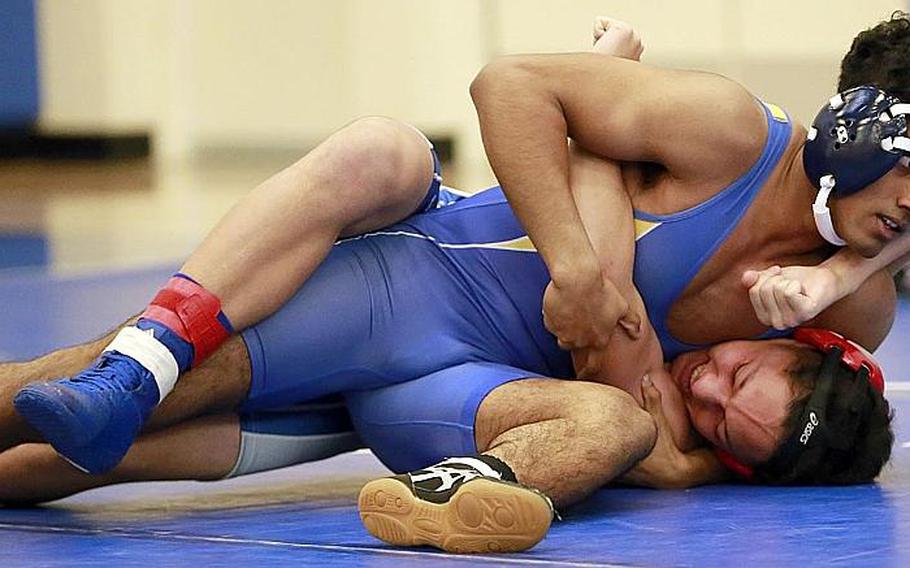 For the first time in six years, there appears to be no clear favorite entering this week’s Far East wrestling tournament, at least in the Division I field, coaches and observers are saying.

“It’s wide open,” said Gary Wilson, whose host Nile C. Kinnick Red Devils swept both D-I freestyle and dual-meet titles a year ago, but are far from the dominating force they’ve been in recent years.

After five years of the Red Devils and St. Mary’s trading the titles, Far East D-I looks much like the 2013 tournament, also hosted by Kinnick, “when it was anybody’s game,” said Wilson, in his ninth season at the Red Devils’ helm.

“It’s a little exciting. It’s not just between Kinnick and St. Mary’s this year.”

Both the Red Devils and Titans had their ranks diminished by transfers and graduations, Kinnick in particular, which lost 12 seniors and has just one returning champion, Chris Mason (215 pounds).

St. Mary’s also has one returning champion, Eiji Kasahara (115) and six seniors. The Titans had a strong season on paper, winning all Japan tournaments but one and coming in second in the Pacific-wide “Beast of the Far East” tournament, but their team margins of victory were slim.

“St. Mary’s has had a little upper hand, they’ve been solid all season,” Wilson said.

But he noted that American School In Japan was right on the Titans’ heels in last week’s Kanto finals, while Kubasaki took third in “Beast.” and swept the regular-season series with Kadena.

Humphreys, meanwhile, went unbeaten in Korea, but against relatively low numbers at the other Korea schools. And the Blackhawks only had three wrestlers at “Beast;” now, they’ll have a full 13.

So who’s going to win the whole shooting match?

The event begins Thursday morning at Yokosuka Naval Base.

Individual wrestlers compete with each other regardless of division, and team champions are crowned in Divisions I and II. The dual-meet tournament follows, starting Friday afternoon and ending Saturday at Kinnick’s gym with the D-I and D-II finals.

Kubasaki, with a record 25 Far East D-I wrestling titles, was the last school besides St. Mary’s and Kinnick to win a team championship, back in 2013. Third-year coach Brent Cook says he feels his Dragons “have a shot” at ending that six-year drought.

“I want for my guys to wrestle their matches and not worry about other people,” Cook said. Unlike at Beast, when he was missing 168-pounder Oakley Mueller, Cook will have a full 13-wrestler contingent in tow - including a new 101—pounder, Dylan Huddleston.

“St. Mary’s is setting up well, Kinnick’s got a great team, ASIJ’s got some great people and we didn’t see the full (Humphreys) team,” Cook said. “And we only finished 12 points behind St. Mary’s” at “Beast.”

Humphreys is in the D-I field for the first time after wrestling five years at D-II.

“I feel confident our guys will do well,” Humphreys coach Ben Pak said. “I don’t want to take anything for granted; this is tougher competition than D-II. Just go out there, think about what we’ve worked on, give it 110 percent and we’ll be OK.”

As for D-II, after two down seasons, Robert D. Edgren, which has a Pacific-record nine D-II titles, appears back in business after having won a dual-meet invitational at Zama earlier this month – the first such victory for Edgren in coach Justin Edmonds’ 14 years at the helm.

“I have good kids, they have a good spirit and they have a chance,” Edmonds said. “We’re going to go after it.”

The Eagles might be competitive even if they were in the large-schools field, Wilson said.

“If Edgren was in D-I, they’d have a decent shot,” he said. “They’re legit. They have a full lineup and they’re good from top to bottom.”