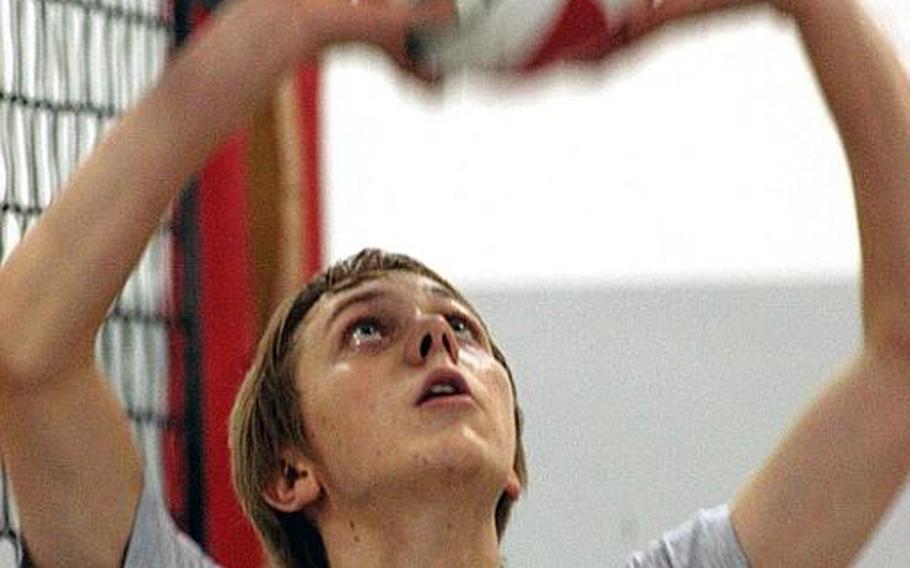 Buy Photo
Aviano High School senior Sam Hillestad, shown practicing his setting, has been playing with Italian teams in preparation for another season of boys volleyball. (Kent Harris/Stars and Stripes)

Things are as fluid as ever for boys volleyball, a DODDS-Europe sport contested only in the Mediterranean region. Naples went undefeated last season and won the season-ending tournament at Aviano, but lost its top player, Abram Campbell, to graduation.

Coach Peter Nagafuchi said the Wildcats are looking for a replacement for Campbell who &ldquo;controlled the floor&rdquo; for the 2009 champs. Until they find one, the door could be opened for the competition

Naples and Aviano will be challenged this year by a towering squad from Marymount International School of Rome, athletic director Simone Trott predicted last week by telephone.

The treetop lineup expects to go out champions.

The team concept is a necessity, too, at Sigonella, where just seven players fill out the traveling squad which opens its season Saturday at AOSR.

Two of them, however, are particular assets to the Jaguars&rsquo; 2010 chances, coach Ross Brand said in a Wednesday e-mail &mdash; setter Jeofrey Lucero and hitter Chris McKissick.

AOSR is one of three opening-day venues on Saturday &mdash; the others are Naples and Vicenza &mdash; which are the opening steps in the march to this year&rsquo;s Med tournament scheduled for Nov. 4-6 at Aviano.