Set up for college volleyball 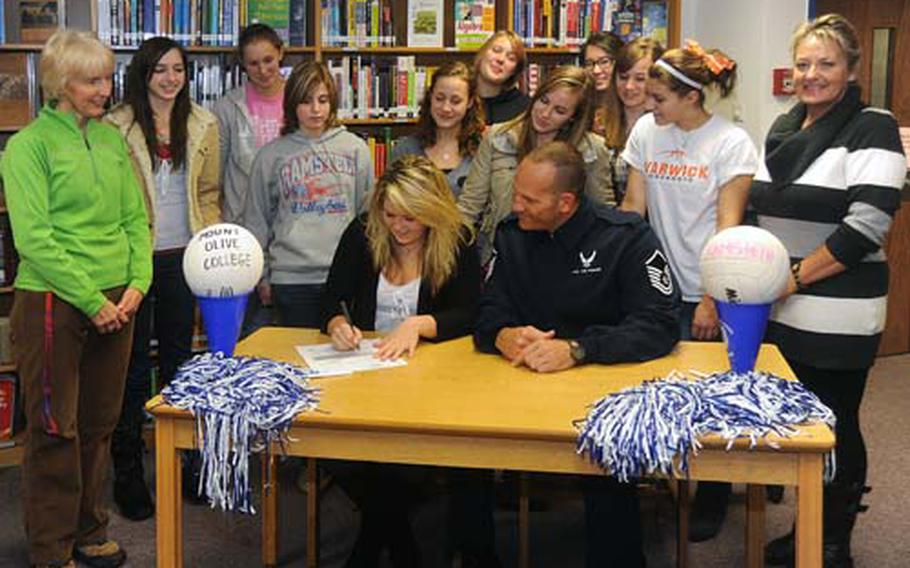 Surrounded by her teammates, parents and coach in the Ramstein High School media room on Monday, Ramstein senior Charnel Austin signs a NCAA Division II national letter of intent with Mount Olive College in North Carolina to play volleyball on scholarship. Sitting at the table with her is her father, Master Sgt. Gary Austin, standing at right is her mother, Gabriele. Charnel’s parents were assistant coaches with the Ramstein varsity team. (Michael Abrams / S&S)

"I&#8217;m very excited," Austin said after a signing ceremony Monday in the school library. "I got so much good feedback from them. They seem to take such good care of their players."

"The college coaches made it very clear that they expect Charnel to be the team&#8217;s starting setter next year," said Austin&#8217;s mother, Gabriele, herself a former setter for the German national team. "They&#8217;re building a totally new team, and they say this is the top recruiting class in their history."

"I&#8217;m preparing with a personal trainer," Austin said, "working on my quickness and jump."

The package includes tuition and other expenses at the private liberal arts college. And the step up in competition will be nothing Austin hasn&#8217;t seen, according to her mother.

"The level is pretty much lower than German club level she faced with her German league teams," Gabriele Austin said. "Those teams usually have five or six Division I prospects."

Austin also is familiar with success. Her Lady Royals won European championships in three of the four years Austin played, culminating with the just-completed 18-0 run to the Division I championship.

She signed with Mount Olive despite never having visited the campus. Still, she said, she&#8217;s eager to begin her time in the Appalachian Mountains.