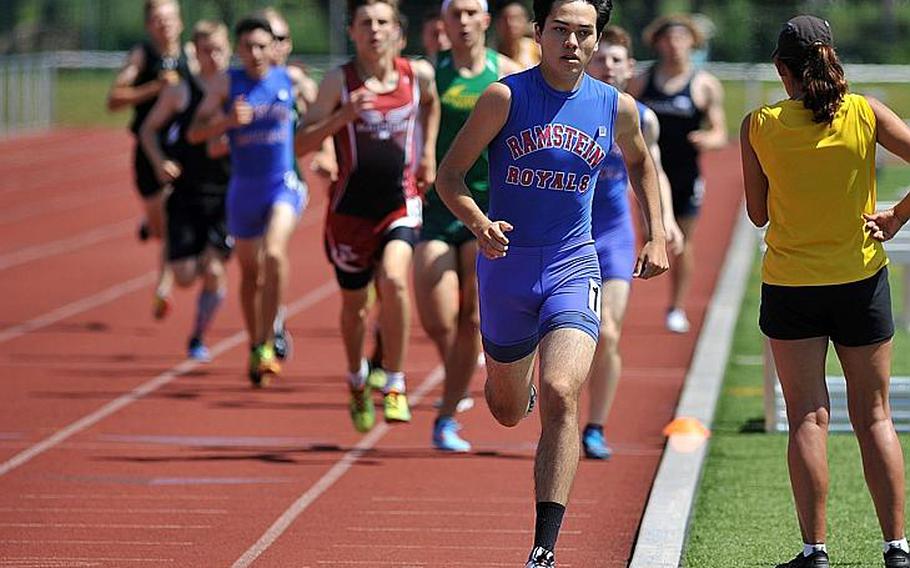 Ramstein's Jose Serrano leads the pack in the boys 1,600-meter race at the DODEA-Europe track and field championships in Kaiserslautern, Germany, Friday, May 25, 2018. Serrano won in 4 minutes, 28.73 seconds. (MICHAEL ABRAMS/STARS AND STRIPES)

So, it came as no surprise that the Ramstein senior repeated as champion in the 800 meters at the DODEA-Europe 2018 Track and Field Championships.

Serrano also broke a European record at the meet – but not in the 800.

In a testament to his talent, determination and versatility, Serrano set a new European mark in the 3,200. It was his fourth gold in two days, coming a day after winning the 800 and the 1,600 and hours after anchoring the Royals’ winning 3,200 relay team to within a second of a new European best.

For his achievements, Serrano is the 2018 Stars and Stripes boys track and field Athlete of the Year.

Serrano said he wanted to end his high school running career with a bang - and that’s exactly what he did.

“It feels great,” he said of winning four events. “It’s my senior year … might as well give it my all in all my events and hope that in college I can do even better.”

Serrano said he hopes to run in college but hasn’t made up his mind on where he’ll go yet.

It’s probably safe to say Serrano has a lot more potential to tap.

A year ago, Serrano, 17, won the 800 at Europeans but he didn’t run any of the longer events, hampered all season by an injury. It was his first year running for Ramstein, after transferring from Oceanside, Calif.

Little did he know then that he was on the cusp of a breakout year.

Serrano jump-started his senior year with a second-place finish in the DODEA Europe cross country championships, as he began seeing the results of being injury free.

Serrano trained and competed throughout the spring without injuries.

“It feels a lot better” to be injury-free, he said. “I don’t have to worry about anything pretty much during my races; I can go all out without negative consequences.”

His race times bore that out. Serrano’s best time of 1:59.88 going into Europeans this year was nearly five seconds faster than his winning time at the championships in 2017.

Most impressive about his efforts on the track at this year’s Europeans was his ability to prevail in two close races where he came from behind to outkick his opponents down the final stretch.

Serrano had to do the same in the 3,200, where he was trailing fellow Royal Dashiell Rogers with under a lap to go. Serrano used his 800 speed to his advantage to stride past Rogers at the finish, cutting nearly 29 seconds off his best time of the year to set a new European record of 9:51.43.

Ramstein coach William Buckley admitted that he was surprised by the 3,200 result.

“His best event was the 800,” Buckley said of Serrano. “Our goal coming in was for him to break 2 (minutes), that’s what we were focused on.

“The fact that he won (the 3,200) and then got the record, that was really exciting,” the coach said. “We had anticipated that Dash (Rogers) was going to do it, and instead he came through.”

Buckley attributes part of Serrano’s success this year to being injury free: “He’s been strong all season.”

But also, “he’s a phenomenal kid and just focused,” Buckley said. “He knew what he wanted and he worked really, really hard at practice. You could always count on him to be there and do what he needed to do.”