Yongsan guard Ronald Bartley tries to dribble past Kato Chapman of the Camp Hovey Hawks during Monday&#39;s double-elimination playoff game. Bartley is a two-time All-Armed Forces guard who helped lead Team USA to a gold medal in 2004 and a bronze two weeks ago in the SHAPE tournament at Mons, Belgium. (Dave Ornauer / S&S)

Yongsan guard Ronald Bartley tries to dribble past Kato Chapman of the Camp Hovey Hawks during Monday&#39;s double-elimination playoff game. Bartley is a two-time All-Armed Forces guard who helped lead Team USA to a gold medal in 2004 and a bronze two weeks ago in the SHAPE tournament at Mons, Belgium. (Dave Ornauer / S&S) 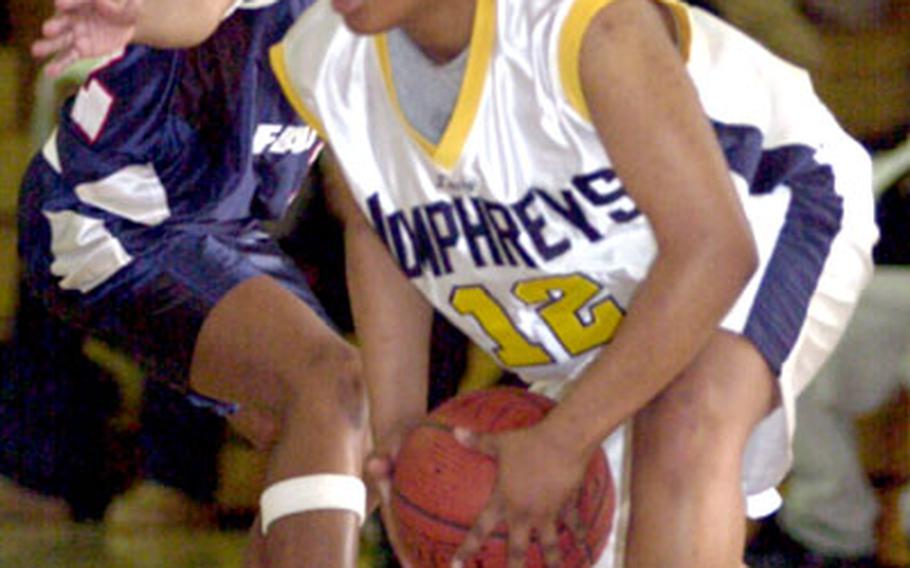 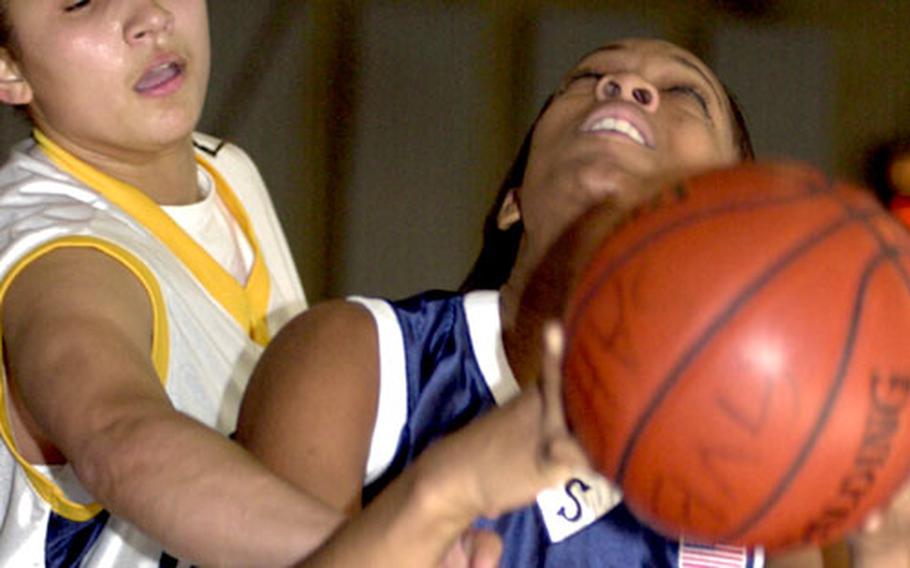 YONGSAN GARRISON, South Korea &#8212; The grades are out. And Seoul American&#8217;s boys and girls basketball squads scored a strong C for confidence and E for experience and education during their stint in the 2005 Pacificwide Open Holiday Basketball Tournament.

Never mind that they only won three games out of the total of 10 they played. Forget that the Falcons boys were outscored by an average of 20 points and the girls by 4.8. What they learned, players and coaches said, by playing military teams for four days was worth its weight in gold.

Each team played in this tournament for the second straight year; last year the Falcons boys went 1-3, and the girls went 1-4.

Seoul American&#8217;s girls doubled their victory total this time, going 2-3, with victories against the Osan Defenders and Camp Humphrey. The boys finished 1-4, their only victory coming against Suwon 83-79.

&#8220;I&#8217;m extremely proud of the way they played in this tournament,&#8221; said Hicks, whose Falcons played without their 6-foot-5 senior center Margaret Nurse, in the States on emergency leave.

It gave other players, such as freshman Devanee Taylor and sophomore Avianca Manning, a chance to grow, and for three-point specialist Germany Tillman to gain shooting confidence.

&#8220;Germany needed to learn to take the ball to the hole and shoot the threes, and she&#8217;s done an outstanding job. Devanee has grown far beyond her freshman year. Avi [and] the ones who didn&#8217;t think they had the ability, now they know they can do it,&#8221; Hicks said.

That was proven by the Falcons&#8217; girls against Humphreys and Osan.

In Monday&#8217;s Falcons-Bulldogs game, Seoul American raced ahead 31-15. Humphreys charged back to take the lead in the second half before Tillman, who scored 31 points, buried the Bulldogs with three late three-point goals.

The Falcons would rather face the best the opposition can throw at them, Christopher said.

All in all, &#8220;It was a great experience for them,&#8221; McKinney said, adding that when the Korean-American Interscholastic Activities Conference season resumes on Jan. 6, &#8220;they should run through all the high school teams they play.&#8221;