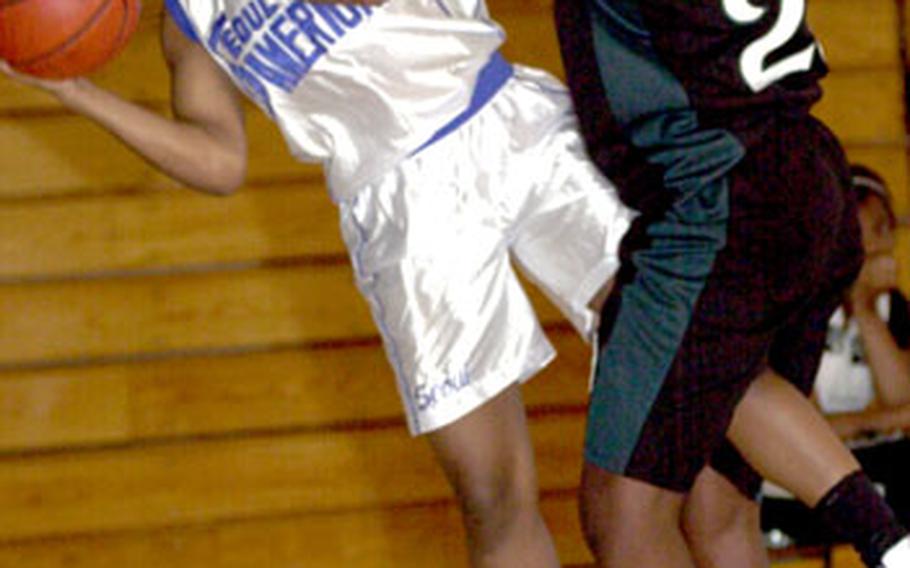 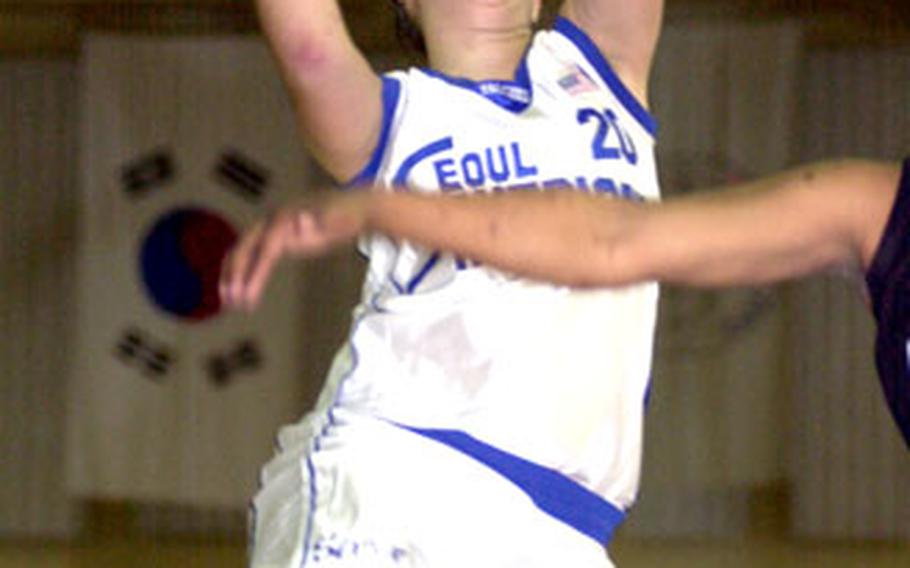 Her Seoul American Falcons girls team escaped an historic upset bid by the Taegu American Warriors on Friday: A basket by senior guard Whitney Grandy with 55 seconds left changed the lead for the seventh time, letting the Falcons win 46-45.

&#8220;I am not happy,&#8221; Hicks said after Taegu came up short in a bid for its first-ever victory over the Falcons in their 38-year history in the Korean-American Interscholastic Activities Conference.

The boys&#8217; game wasn&#8217;t as close, as senior guard Jamaal Mohn had 17 points and six steals as the Falcons pulled away in the second half to win 89-47 in the final KAIAC games before the two-week holiday break.

In the first of two regular-season games between the girls teams hosting their respective Far East tournaments in February, the Class A Warriors scored six straight to pull ahead 15-10 in the second period over the defending Class AA champion Falcons.

Taegu kept the lead until midway through the third quarter, when the Falcons&#8217; Jevonna Green hit on a drive to the hoop, making it 32-29 Seoul American.

The game see-sawed until Grandy&#8217;s basket put the Falcons ahead for good. Grant had a chance to pull it out for the Warriors but hit the rim on two foul shots with three seconds left.

Green and Grandy each finished with 10 points. Green scored eight in the second half for a Falcons team missing 6-foot-5 senior center Margaret Nurse, who is in the United States on emergency leave. Tank Hancock supported Grant with 13 points.

Missing foul shots and not controlling the boards on the defensive end did in the Warriors, coach Michelle Chandler said.

Falcons coach Steve Boyd also was dissatisfied despite his boys&#8217; one-sided triumph, balanced scoring (11 of 12 players scored) and despite the fact his outsized team still outrebounded the Warriors by a 3-1 margin.

Warriors coach Troy Denson said his players needed to do a better job of boxing out on the boards: &#8220;We need better positioning underneath.&#8221;

The Falcons&#8217; Justin Lee had nine rebounds and Tyras Milner and Andrew Luna seven each. Warriors Wendell Espy and Kenny Harris had 12 points each.

Even after the final buzzer, the Falcons weren&#8217;t finished. A last-second entry into the 2005 Pacificwide Holiday Basketball Tournament, they took the court less than an hour after the Taegu game, losing 83-66 to the Camp Casey Suns of the Korea Traveling League.

Mohn&#8217;s 17 points and six rebounds led the way for the Falcons but Boyd felt the score could have been closer had his charges hit more shots. For instance, they missed seven open layups in the first half.

Seoul American also will compete in Yongsan&#8217;s Dec. 27-30 company-level holiday tournament. The girls are entered in the Pacificwide. The Warriors&#8217; girls will play in the Taegu Holiday Basketball Tournament Dec. 27-30 at Camp Walker.