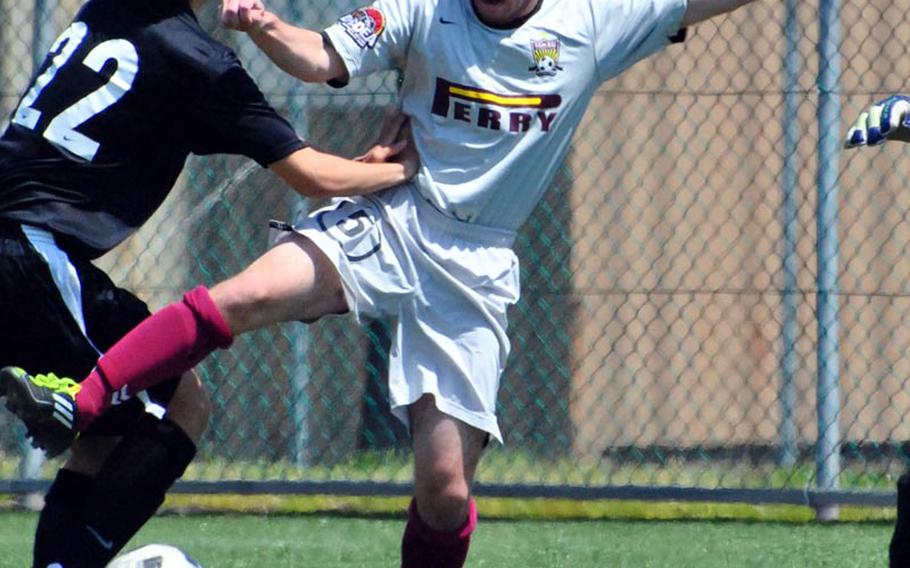 Few might have seen Far East Tournament MVP Josh Chung and Seoul American&rsquo;s boys coming last year. They may be seeing much of the Falcons now and into the future.

Now, with 15 players back, including six starters, plus four varsity-ready freshmen, and with KAIAC appearing to be just as competitive as it was last year, coach Steve Boyd feels Seoul American is the classic &ldquo;now and later&rdquo; team, built to win again this season and for years to come.

&ldquo;The good thing is the depth,&rdquo; he said, adding he used 19 players in the Falcons&rsquo; 2-0 season-opening win Wednesday at Taejon Christian International.

&ldquo;We&rsquo;ve never had the depth. We go two-deep at each position. By Far East, all these kids will be able to go in (and contribute) quality minutes. The future looks bright. I&rsquo;m optimistic at this point.&rdquo;

As it was last season, KAIAC D-I will again serve as an excellent proving ground, Boyd said, with five or six teams &ndash; including the Falcons &ndash; capable of capturing the league title.

&ldquo;On any given Wednesday, Friday or Saturday, any one of those teams is capable of beating the other,&rdquo; Boyd said.

&ldquo;If they beat you three times, they&rsquo;re better than you are,&rdquo; said coach Mark Lange, whose Perry side returns the Pacific&rsquo;s leading goal scorer Tyelor Apple (38) and two others in double figures.

&ldquo;We were just not quite there,&rdquo; Lange said. &ldquo;The chase for the title goes through YIS-Seoul. They&rsquo;re up (at another) level.&rdquo;

At another level three years&rsquo; running has been Osan American&rsquo;s girls team, which has overcome devastating knee injuries to its stars and somehow defended their D-II title when all seemed lost for the Cougars.

&ldquo;It will be a challenge,&rdquo; Plourde said, adding that in years past, &ldquo;we&rsquo;ve had a couple of second-team players who have stepped up. You train the kids to become better players, go back to basics, start from scratch and hope for the best.&rdquo;

While Osan puts its three straight D-II titles on the line, Kubasaki&rsquo;s girls hope to take that last step up the gold-medal platform for the first time since 2007. Since then, the Dragons, with a fourth head coach in four years, have sandwiched two runner-up finishes around a bronze medal in 2010.

&ldquo;We have to do this; it&rsquo;s my senior year,&rdquo; said Kubasaki&rsquo;s Liz Fabilla, the Pacific&rsquo;s current active leader in goals with 100.