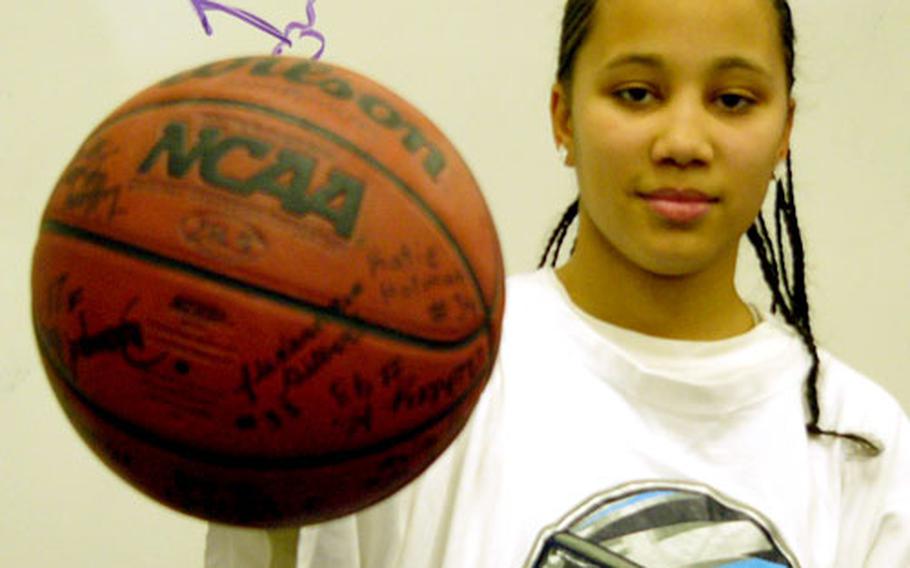 BAUMHOLDER, Germany &#8212; Tish Schelhas turns 18 on Sunday, but she&#8217;s already sharing her gifts with the Baumholder Lady Bucs basketball team &#8212; and has been for the past four years.

Schelhas, a 5-3 guard, is scoring at a rate of 19.8 points per game this season. But she gives her team more than numbers, her teammates say.

And very specific, according to Baumholder coach Carter Hollenbeck.

The briefest of conversations with Schelhas provides an insight into her team-oriented instincts.

Even though she&#8217;s scored one-half of the unbeaten Lady Bucs&#8217; points this season, Schelhas is still averaging seven assists every time out this season.

With Schelhas, who averaged 22 points per game last season, drawing extra defensive attention from Baumholder&#8217;s opposition this season, her role in setting up her teammates will loom increasingly large.

Last weekend, for example, Schelhas scored 23 points Friday in a 59-33 road victory at AFNORTH of Division II. Saturday, when AFNORTH coach Greg Blankenship switched to a triangle-and-two to double-team her, Schelhas scored just 12 points but pulled off eight steals and grabbed 10 rebounds to gain vital possessions for less well-defended teammates. Her steal and assist to Williams in the closing seconds sealed Saturday&#8217;s 38-35 victory.

Schelhas is used to exciting finishes.

Her first season on the team, the Lady Bucs won the European Division III crown. Her sophomore and junior years, the Lady Bucs finished third in Europe, with last year&#8217;s clutch 47-44 overtime victory over Sigonella in the third-place game providing Schelhas a career highlight.

Schelhas said pressure made that game and those shots special.

The Lady Bucs are apt to be depending on her again at tournament time.

With her high school career ending, Schelhas hopes to move on to college basketball. She&#8217;s in the process of sending tapes to colleges and awaiting replies.

Only the first half of that emotional assessment, however, applies to the Lady Bucs.