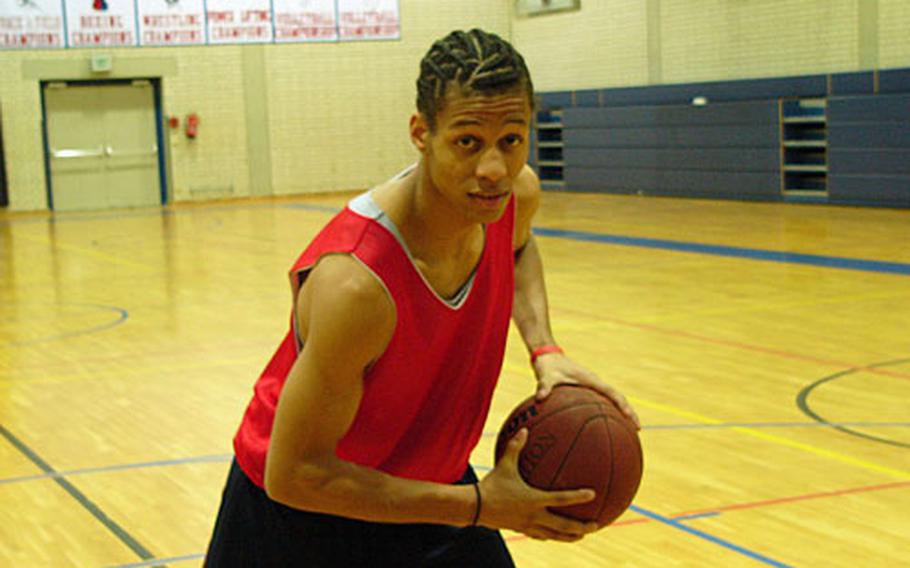 Vilseck&#39;s Josh Franks is having a ball leading his team&#39;s quest for a Division II title. He particularly enjoyed opening the season against Kaiserslautern -- the team he played for before transferring to Vilseck for his senior year. (Rusty Bryan / S&S)

Not that he needed any, but Josh Frank says his first game as a Vilseck Falcon was all about redemption.

&#8220;The best part of the game was showing the coach from K-town that I had skills,&#8221; Frank, a 17-year-old senior who transferred from Kaiserslautern this year, said of playing his old teammates Friday.

That last remark clearly strays into hyperbole, since Kaiserslautern coach Brant Tryon called Frank &#8220;an incredible player&#8221; in nominating him for All-Europe. The 6-foot-4 forward was in the lineup enough to make the All-Europe second team, averaging eight points, 11 rebounds and two steals per game.

Coaches and players invariably differ over what constitutes adequate playing time, and this time is no exception.

&#8220;What an unfortunate comment from a player that I always felt had enormous potential,&#8221; Tryon said Wednesday when informed of Frank&#8217;s opinion. &#8220;I was disappointed to see Josh leave K-town because I knew he was a fantastic basketball player as well as a wonderful individual.&#8221;

Tryon&#8217;s disappointment was well-founded during Friday&#8217;s 61-55 Vilseck victory. Frank scored 13 points, snared five rebounds and blocked three shots in his Vilseck debut despite being double-teamed most of the way.

&#8220;They tried to cover him man-to-man at first,&#8221; Vilseck coach Billy Ratcliff said Wednesday of his prize transfer, who last month made All-Europe in football team. &#8220;He scored 11 points in about 90 seconds. After that, they double-teamed him all the way.&#8221;

Frank, who scored 16 points and had four steals in Saturday&#8217;s 55-50 overtime loss to K-town, said a scheduling change dictated he&#8217;d begin his Vilseck career against the team he&#8217;d been a part of during his first three high school years.

&#8220;Last year at the (European) tournament, we all heard about the kid from K-town who did a two-handed dunk behind his head on a fast break,&#8221; Ratcliff recalled.

&#8220;Of course, there&#8217;s more to basketball than dunking the ball. He can jump out of the gym. He could be a post player. He has great inside moves. He boxes out well. He has a great interior perimeter game.

Frank was eager to give his old K-town friends a taste of all that.

The K-town series could be the high point of the regular season for Frank, who characterized the new regional set-up as &#8220;practice for the tournament.&#8221;

He is confident about what will happen when that rolls around.