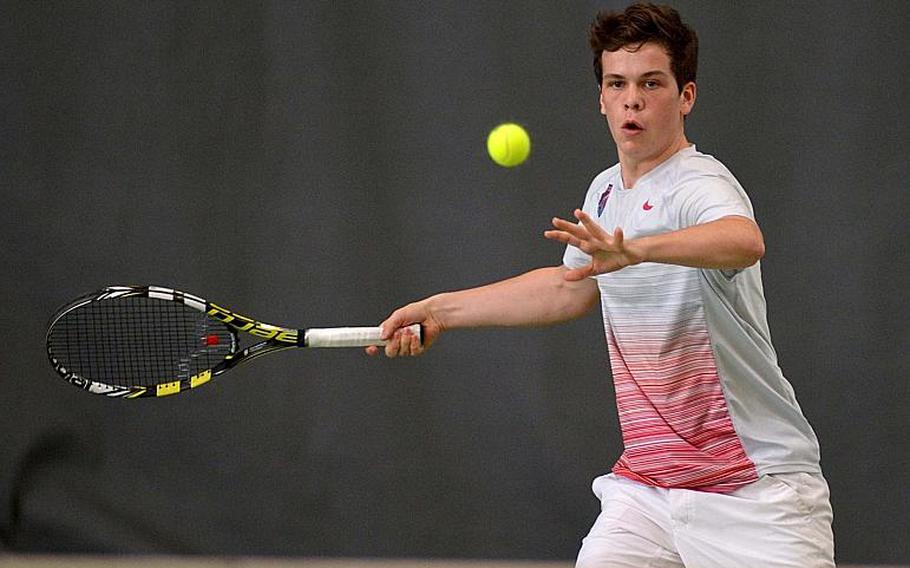 Fabian Sandrup Selvik of ISB returns a shot from teammate Victor della Faille in a semifinal at the DODDS-Europe tennis championships in Wiesbaden, Germany. He win on to win his second straight title. (Michael Abrams/Stars and Stripes)

Not every elite tennis player that attends a DODDS-Europe high school is particularly interested in winning a DODDS-Europe championship. In recent years, some championship-level players have decided against committing the three required months to the organization’s fall season in favor of more dates on the international circuit.

“I felt that since I love DODDS so much – it’s probably my favorite tournament – I felt like I wanted to come back and do it one more time,” Selvik said.

The rest of the DODDS-Europe field likely wouldn’t have minded if Selvik had made other plans. The International School of Brussels ace blazed through his senior season, claiming his second straight European boys singles title with a convincing 6-2, 6-1 defeat of American Overseas School of Rome’s Ting Lin. After that dominant run, Selvik is the obvious choice as the 2015 Stars and Stripes boys tennis Athlete of the Year.

The Selvik that returned for one last title run was an even better player than the one that seized the 2014 title. The senior said he came back stronger and more aggressive, with an unbreakable serve – literally, Selvik’s serve wasn’t broken once over the three days of the European tournament – and an even more developed collection of volleys, drop shots and forehand strikes.

“I was very proud of my performance in the final, because it is a very difficult stage to play,” Selvik said. “It feels like a completely different match.”

“His level of maturity – that’s one of his strong points,” Deconinck said. “You can tell he is a competitive player, he knows what competition is all about, and he’s a role model for the rest of the team.”

With his impressive DODDS-Europe run behind him, Selvik now looks on to the next step of his promising tennis career. He hopes to earn a scholarship to play collegiate tennis in the U.S., and said he’s already received some interest.

Wherever he ends up, Selvik will carry fond memories of this phase of his career.

“I will look back on these last years and think how much fun it was,” Selvik said. “I’m happy I won, but as well I am sad because it is over now.”