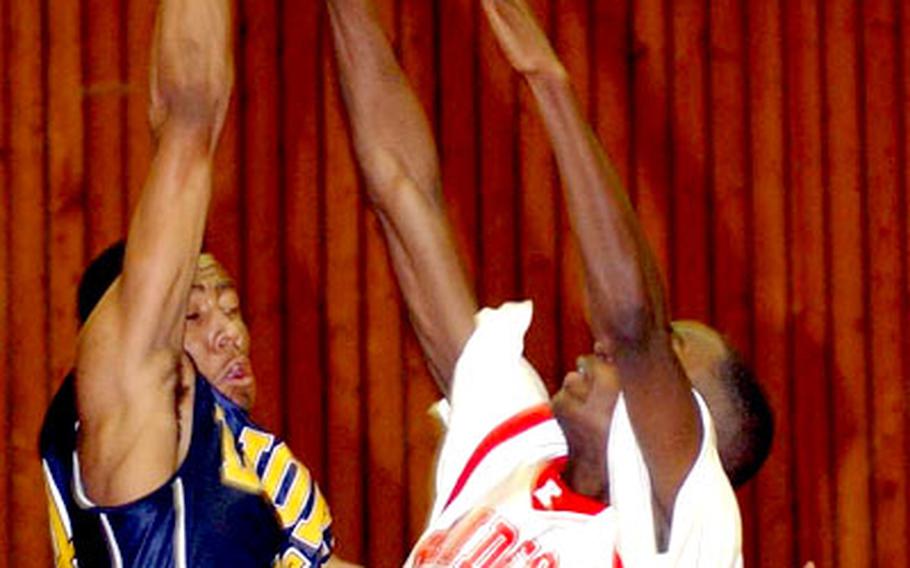 Kaiserslautern sophomore Aaron Ellis, right, deflects a pass by his Albert Schweitzer teammate Jonathan Williams of Heidelberg during a game in Kaiserslautern, Germany, on Jan. 4. (Photo courtesy of DODDS)

Kaiserslautern sophomore Aaron Ellis, right, deflects a pass by his Albert Schweitzer teammate Jonathan Williams of Heidelberg during a game in Kaiserslautern, Germany, on Jan. 4. (Photo courtesy of DODDS) KAISERSLAUTERN, Germany &#8212; For the vertically challenged among us, it sounds strange to hear a 6-foot-9 16-year-old talking about doing some more growing.

But for slender Kaiserslautern sophomore Aaron Ellis, growth is decidedly what&#8217;s in the cards &#8212; physically and talent-wise.

He also expects to add the bulk needed to play serious basketball.

&#8220;I need to pump my weight and strength,&#8221; he said as his coach, Clinton Robinson, nodded emphatically in agreement on a bright spring morning in Robinson&#8217;s math classroom.

&#8220;Going to the rim&#8221; leads naturally to Ellis&#8217; more immediate growth prospect &#8212; on the court. It begins Sunday at the first of a series of two-a-day practices when Ellis takes his place among the 12 members of the U.S. team for the 2004 Albert Schweitzer International Youth Basketball tournament. The biennial event sponsored by the German Basketball Federation runs this year from April 10-17 in Mannheim.

Ellis was selected as one of the two DODDS-Europe players for the U.S. team at a tryout camp in Baumholder last month. Heidelberg senior Jonathan Williams was the other, and they&#8217;ll join 10 NCAA Division I prospects brought over for the tournament.

Ellis will be one of two sophomores on the U.S. team, which will also suit up six seniors and four juniors. According to Baumholder coach Mike Reilly, who was one of the selectors for the team, Ellis made up for his youth and inexperience with an attentive and effective tryout session.

Reilly added that the makeup of the U.S. contingent on the team worked in Ellis&#8217; favor.

Ellis will be the second-tallest player on the team, but he said he expects to play two-guard or wing, positions that play to his offensive strengths.

Unlike most of his soon-to-be teammates, Ellis is familiar with the international rules that will be used at the tournament. He has played for FC Kaiserslautern, the biggest German sports club in the area, and has also played in Belgian and Austrian tournaments.

Robinson organized and coached those tournament teams, and Ellis has also benefited from his coach&#8217;s efforts to take local players to stateside summer basketball camps.

Robinson and Ellis are planning to go to camps in Pennsylvania this summer &#8212; after he gets his chance to grow in the tournament against the best high school-aged players from 15 countries.

And beyond the Schweitzer tournament and high school?