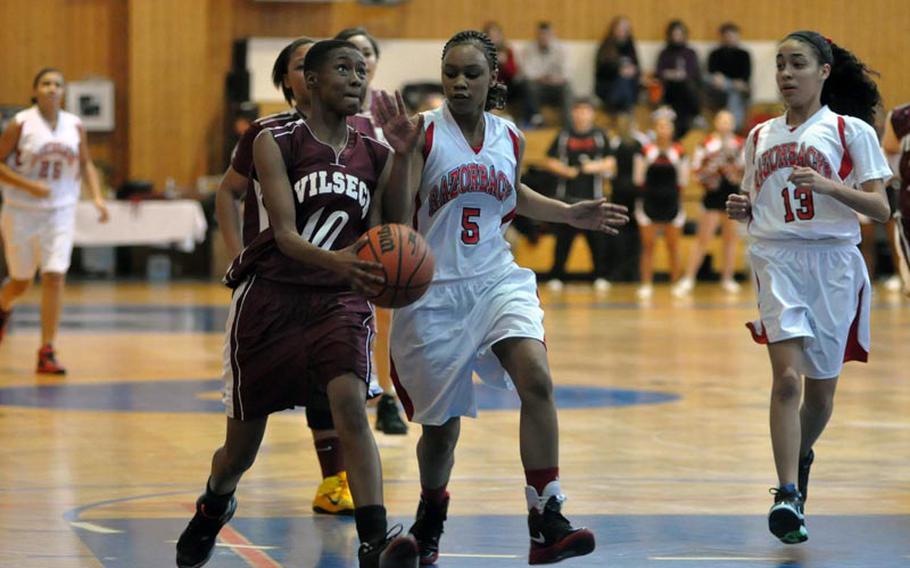 China Sumpter of Vilseck drives to the basket Saturday in Schweinfurt, Germany, the Razorbacks Santrice Jackson, left, and Mariel Jones give chase. The Lady Falcons won the game in overtime 36-32. Sumpter was the leading scorer with 19 points. (Dan Blottenberger/Stars and Stripes)

China Sumpter of Vilseck drives to the basket Saturday in Schweinfurt, Germany, the Razorbacks Santrice Jackson, left, and Mariel Jones give chase. The Lady Falcons won the game in overtime 36-32. Sumpter was the leading scorer with 19 points. (Dan Blottenberger/Stars and Stripes) Diandra Quashie of Schweinfurt prepares for a shot Saturday in Schweinfurt, Germany. The Lady Falcons of Vilseck won the game in overtime 36-32. Quashie had 12 points, 11 rebounds and five blocks in the losing effort. (Dan Blottenberger/Stars and Stripes) Trey Adkins of Vilseck drives to the basket as Schweinfurt's Brandon Wright attempts a block Saturday in the Razorbacks' 47-38 win over visiting Vilseck. Wright was the game's leading scorer with 11 points. Adkins finished with four assists and two steals. (Dan Blottenberger/Stars and Stripes) Brandon Wright, a senior for the Schweinfurt Razorbacks, moves down court Saturday in the Razorbacks' 47-38 win over visiting Vilseck. Wright was the game's leading scorer with 11 points. (Dan Blottenberger/Stars and Stripes)

SCHWEINFURT, Germany - The Schweinfurt Razorbacks handed the Vilseck Falcons their first loss of the season Saturday by beating the Falcons, 47-38.

It was Schweinfurt&rsquo;s second win of the season and according to Jesse Woods, the Razorbacks head coach, it was about time his team started performing to its potential.

&ldquo;We stepped up and played defense,&rdquo; Woods said. &ldquo;We are a better team than the games that we lost - we just haven&rsquo;t started playing well together - we are starting to gel now.&rdquo;

The Razorbacks recovered from Friday night&rsquo;s 54-47 loss. Woods credited the improvement to communication between his big players controlling the paint.

&ldquo;They were communicating in the back, which allowed us to move and keep that gaps closed.&rdquo;

John Sabala, Vilseck&rsquo;s head coach, agreed with Woods assessment, saying his team lost because they were unable to grab rebounds.

Schweinfurt&rsquo;s Tony Price, Jordan Richardson, John Kinar and Jordan Simpkins accounted for the majority of the team&rsquo;s rebounds. Price and Richardson brought down seven each.

Razorbacks senior Brandon Wright controlled the pace of the game and scored a game-high 11 points.

&ldquo;We were just trying to make a statement,&rdquo; he said. &ldquo;Everybody is not really looking up at us - we are probably at the bottom of the list right now - so we are just trying to step it up.&rdquo;

The game was deadlocked at the half, with Schweinfurt holding the slimmest of leads, 20-19. It took a strong third quarter for the Razorbacks defense to make a statement, holding the Falcons potent offense to only three points - the direct opposite of what happened in the third quarter the night before.

Christian Carrillo boosted his team&rsquo;s third-quarter run with two consecutive 3-pint shots, giving the Razorbacks a nine-point lead at the end of the third. Both teams scored 16 points in the fourth quarter, sealing the deal for the Razorbacks win.

The Lady Razorbacks, who were in pursuit of their first win, took the Falcons into overtime before falling, 36-32.

Foul shots wound up being the difference in the game. Vilseck tallied its best percentage of foul shooting all season, according to head coach Jim Hall by hitting 10 of 19. The Razorbacks went to the line double that amount with 24 attempts they could only bring in six points.

Hall said his team played a sloppy game and could not hit any shots up close.

&ldquo;We couldn&rsquo;t shoot - we did not attack the basket very well,&rdquo; he said.

With Vilseck up 30-26 and under 2 minutes remaining the Razorbacks battled back to force overtime after some big scores and steals by Shadaja Gamble and Diandra Quashie. Gamble finished the game with nine points - the most for the Lady Razorbacks.

In the 4-minute overtime, China Sumpter hit the only basket outside of free throws. Sumpter, a sophomore, finished with game high 19-points for the second straight game. The Falcons won Friday night, 45-26.