Sans screening, World Cup seats can be had – for a price 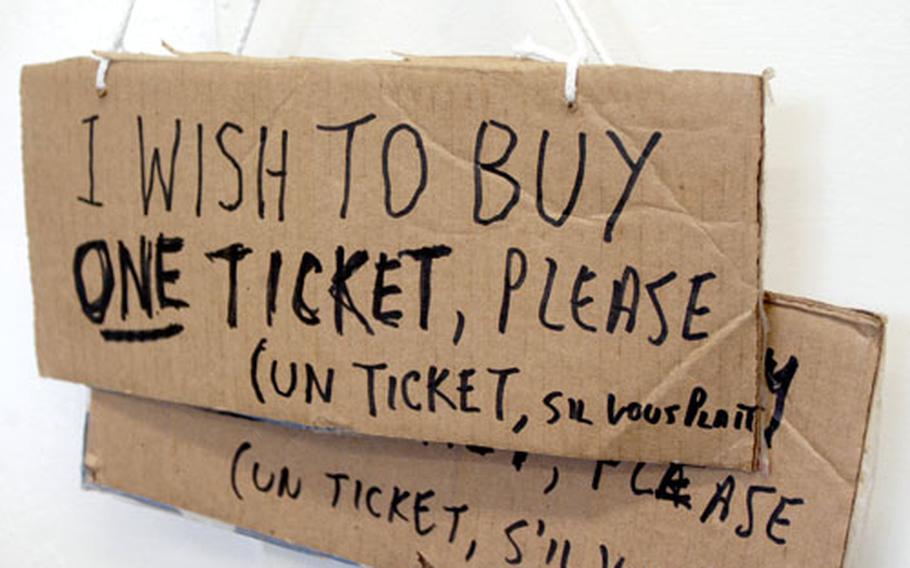 Signs like these help attract people who have extra tickets for World Cup games, including scalpers. (Charlie Coon / S&S)

Yes, the games are virtually sold out, and tickets are imprinted with the names of the original buyers. But security workers at the turnstiles are rarely checking IDs, and scalpers are plying their trade outside the stadiums.

Fans can get into games &#8220;as long as the ticket is valid and you can say &#8216;here is my passport,&#8217;&#8221; Wolfgang Niersbach, vice president of the organizing committee, told a press conference in Berlin, according to Bloomberg.

I already knew that, having successfully bought a ticket from a scalper for the Argentina-Ivory Coast game in Hamburg. I also could have gotten into France vs. Switzerland in Stuttgart, but the scalpers just laughed at the 100 euros I had in my pocket.

Anyone with a pocketful of euros stands a good chance of getting in to see a game, though the teams involved seems to affect one&#8217;s chances of getting a ticket.

Most European teams, including Italy, which plays the United States Saturday in Kaiserslautern, have rabid fans. Finding a ticket to, say, highly popular Brazil vs. Australia on Sunday in Munich almost certainly will be harder than, say, finding one for Iran vs. Angola on Wednesday in Leipzig.

So how does one stand among thousands of fans at the stadium and find that one person who has an extra ticket? Advertising.

Outside big-time sporting events and concerts, many of the people holding signs that read &#8220;need tickets&#8221; actually have tickets. They&#8217;re scalpers, trying to buy low and sell high.

After asking a couple hundred people before the Argentina-Ivory Coast match if they had an extra ticket, I decided to steal a page from the scalpers&#8217; book, went to a nearby store and purloined a cardboard box, magic marker and tape.

Ten minutes later I was a walking billboard, front and back, with a simple message: &#8220;Wish to buy ONE ticket, please. (Eine Karte, bitte).&#8221; Then, I stood on the train platform at the stadium, in the middle of the onrushing crowd.

Argentina vs. Ivory Coast, Saturday night, Hamburg: Went to the train platform at the stadium, where every five minutes fans were disembarking by the hundreds. A British guy saw my sign. Turned out his mate couldn&#8217;t go, so he sold me the extra ticket for face value of 100 euros. A nice seat.

Italy vs. Ghana, Monday night, Hannover: I had a ticket, but five Brits staying at the same hotel did not. Their leader, a guy named Mazz, told me they began working the streets, just asking people, the day before the game. Eventually they all got mediocre seats, not sitting together, for about 200 euros apiece.

France vs. Switzerland, Tuesday afternoon, Stuttgart: Many people were looking and prices were high. The first guy I asked wanted 600 euros. Others wanted from 200 to 400 euros. Kept my money in my pocket and watched the second half at a local pub. It turned out to be a good decision, considering the 0-0 game.