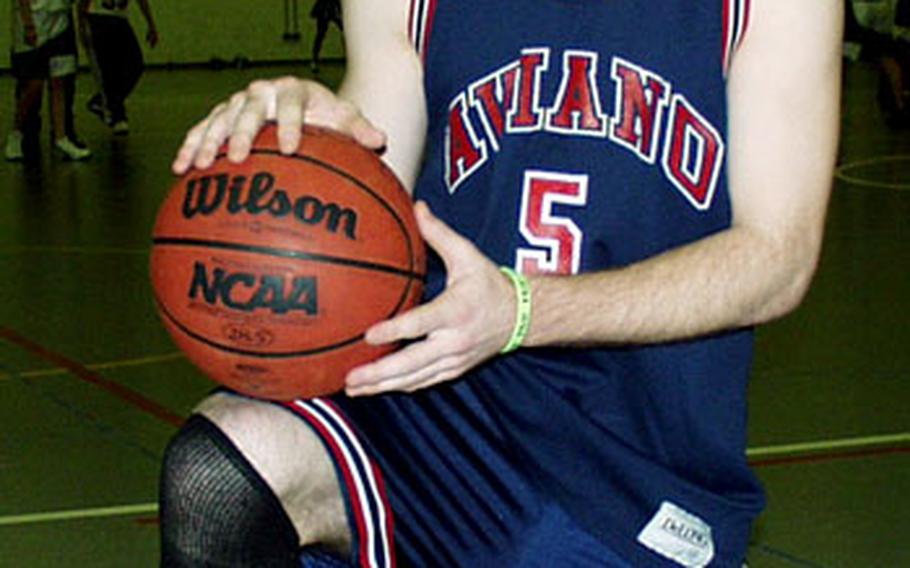 Aviano sophomore point guard Dustin Miller has made an adjustment to a new school and position. Miller is averaging 29 points a game for the Saints (10-2). (Jason Chudy / S&S)

Other times . . . well, not many high school basketball players in Italy have sympathy for Dustin Miller this year.

The sophomore from South Dakota scored 38 points in his Department of Defense Dependents Schools debut on Dec. 6. He followed that with 41 the next day.

Miller appears to have adjusted to new teammates, a new position and a new continent rather quickly. That might not be too surprising, since quickness is one of his greatest strengths on the court.

He&#8217;s used to stretching it. Miller&#8217;s deadly outside shooting forces opponents to play tight defense. That&#8217;s when he drives to the basket.

Against Naples on Saturday, Miller scored 33 points, slightly above his Europe-best season average of 29 per game.

Those familiar with the Aviano program &#8212; and it&#8217;s hard not to know about coach Ken McNeely, who earned his 600th coaching victory in 2002 &#8212; might be surprised to find such a prolific scorer wearing a Saints uniform.

The Saints were 10-0 before playing Naples and won several of those game by mercy-rule victories. Despite weaker competition, Miller&#8217;s stats weren&#8217;t padded. The games didn&#8217;t go the distance, and neither did Miller.

Naples was a different matter. The Wildcats took over first place in the league by routing the Saints 80-46 on Friday. Miller had 18 points. Despite his 33-point effort Saturday, Aviano fell 68-61. Naples, now in the driver&#8217;s seat for the automatic bid to the European championships, had too much height and power for the Saints.

He&#8217;s used to playing against taller opponents. He started playing basketball in the sixth grade, when his father, Master Sgt. Troy Miller, was stationed at Ellsworth Air Force Base, S.D. The Millers had earlier lived in the Azores and Panama City, Panama.

Miller spent a lot of time in gyms in South Dakota.

McNeely has sent 22 players from Aviano to college programs in the States. He said Miller has a chance to be added to the total. But he&#8217;ll probably have to do it as a point guard, a position he hadn&#8217;t played much until this year.

Miller&#8217;s supposed to stay around long enough to graduate from Aviano, so McNeely says he&#8217;ll have a few more years learn the position.