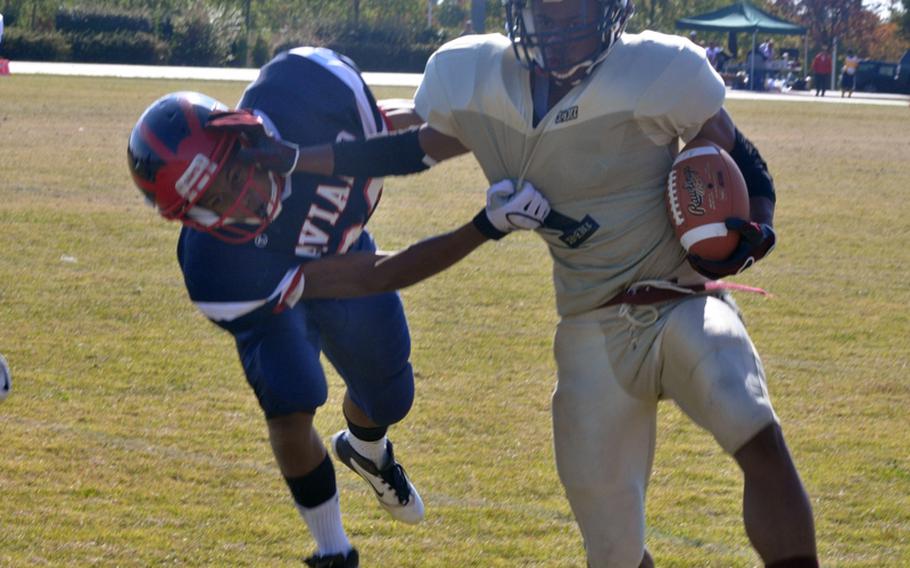 Baumholder's Anthony Hendrix tries to fight off Aviano tackler Andrew Bert Saturday in the Saints' 48-24 victory over the Bucs. (Kent Harris/Stars and Stripes)

Baumholder's Anthony Hendrix tries to fight off Aviano tackler Andrew Bert Saturday in the Saints' 48-24 victory over the Bucs. (Kent Harris/Stars and Stripes) 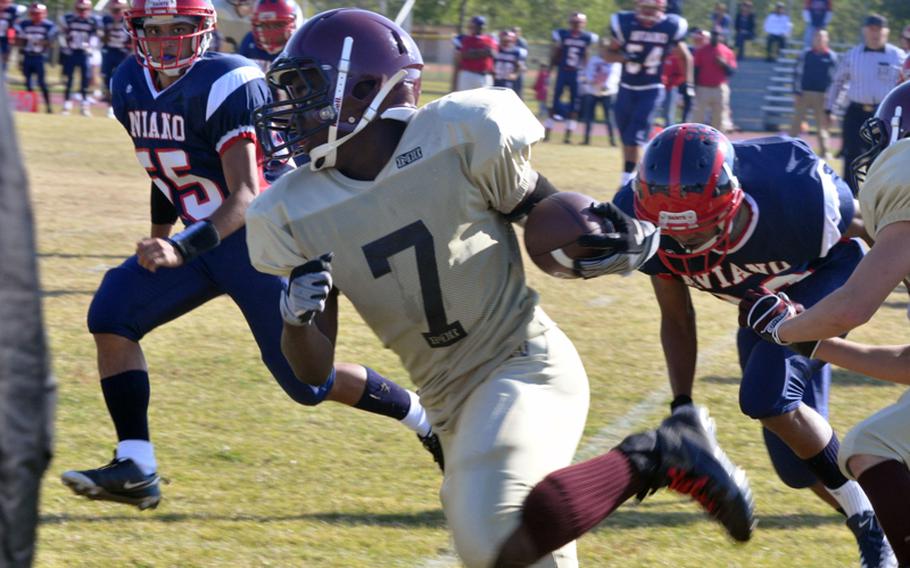 Baumholder running back D'Vonte Dawson looks for room as Aviano's Darnell Lewis closes in. The Saints won 48-24 to reach the DODDS-Europe Division II semiifinals next week in Bitburg, Germany. (Kent Harris/Stars and Stripes) 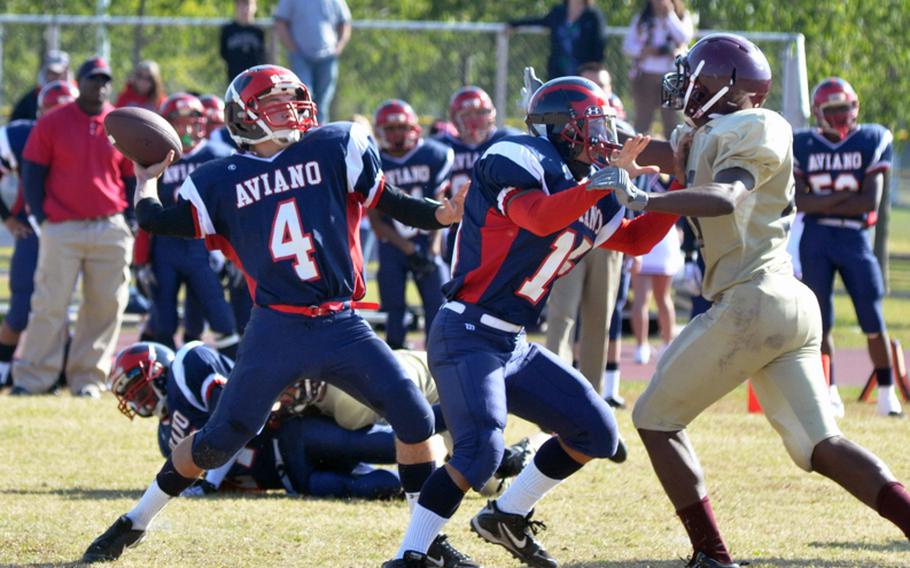 Aviano quarterback Corey Webb goes back to pass Saturday in the Saints' 48-24 victory over Baumholder. Webb, who completed eight of 10 passes for 172 yards, found Andrew Bert for a 37-yard touchdown on the play. (Kent Harris/Stars and Stripes) 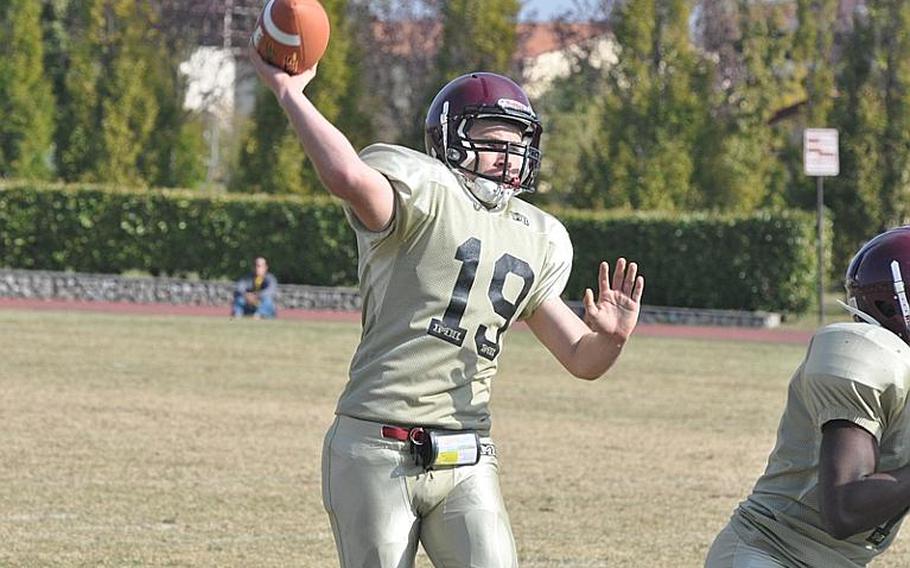 Baumholder quarterback Christian Kubas tries to connect with Ben McDaniels on a pass Saturday in the Bucs' 48-24 loss to Aviano. (Kent Harris/Stars and Stripes) 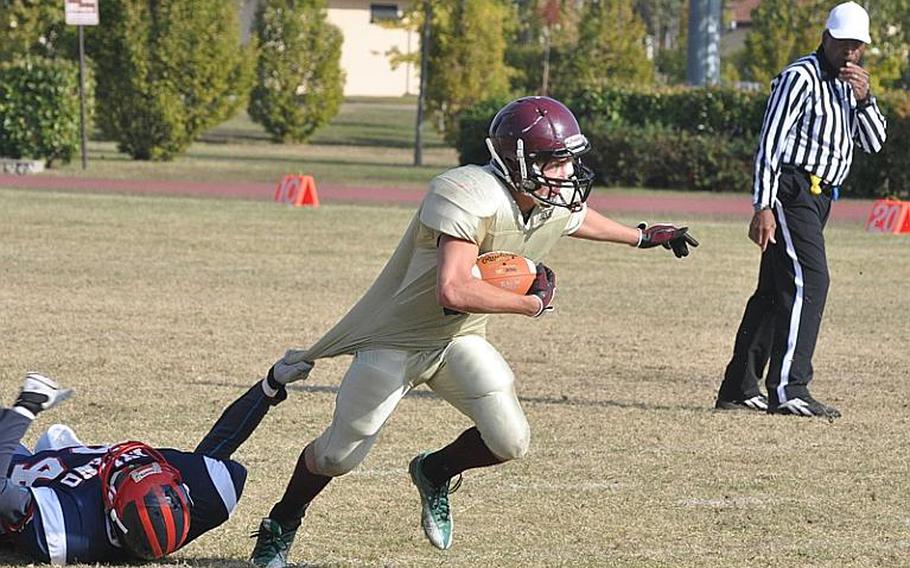 Baumholder's Ben Holliday pulls away from Aviano's Myron McRae Saturday in Aviano's 48-24 victory over the Bucs. Holliday rushed for 115 yards in the loss. (Kent Harris/Stars and Stripes) 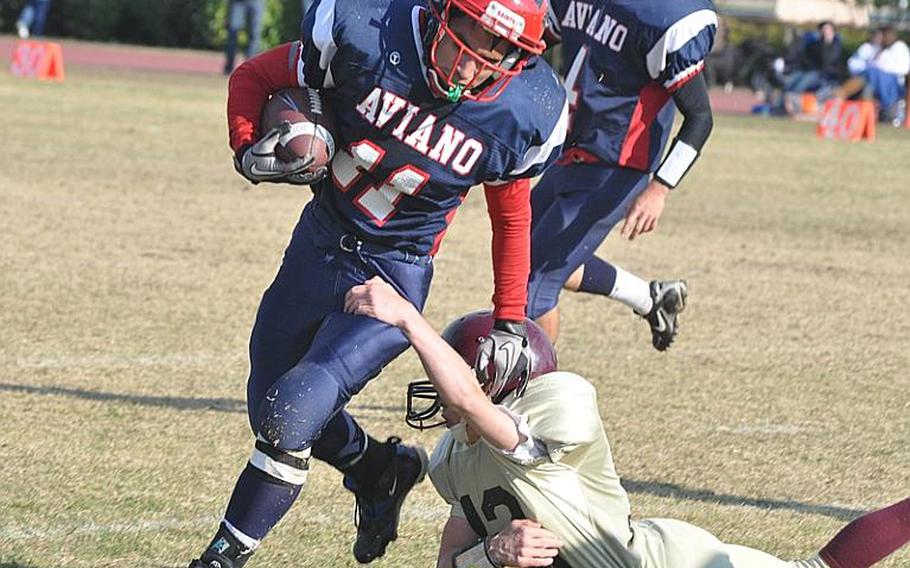 Aviano's Nik Weiser breaks away from Baumholder's Blake Brittain during a 15-yard gain in the fourth quarter Saturday in the Saints' 48-24 victory over the Bucs. (Kent Harris/Stars and Stripes)

That statistic wasn&rsquo;t an indication that the Division II quarterfinal game between the two teams was a defensive showdown. But it was a sign of how things went for the Saints in their 48-24 victory.

Things such as Andrew Bert&rsquo;s fumble recovery and 67-yard run for a touchdown that accounted for the Saints&rsquo; only points of the third period. Bert&rsquo;s extra-point kick gave Aviano a 34-18 lead and Baumholder didn&rsquo;t get within double digits the rest of the way.

The Saints&rsquo; victory propels them into a semifinal matchup with unbeaten Bitburg next week in Germany. The Bucs finished the season at 3-3.

Baumholder actually outgained Aviano 257-108 in the second half, though the Saints won the battle on the scoreboard, 21-6. Three different Bucs rushed for more than 100 yards, but costly penalties, a few miscues and poor field position hindered Baumholder all day.

&ldquo;We knew it was going to be very difficult to stop them offensively,&rdquo; Baumholder coach Carter Hollenback said. &ldquo;So we just wanted to outscore them.&rdquo;

Running a hurry-up offense for much of the game, the Bucs got off to a good start, taking the ball 80 yards on 11 plays on the opening drive. Quaterback Christian Kubas, who finished with 101 yards on 25 attempts, capped the drive with a 3-yard keeper.

But Aviano answered with a nine-play, 60-yard drive, capped by Nik Weiser&rsquo;s 2-yard run. After Baumholder punted, the Saints struck again on the next play with quarterback Corey Webb connecting with Andrew Bert for a 37-yard touchdown pass. Bert&rsquo;s second extra-point kick made it 14-6.

After Baumholder was stopped on downs, Darien Cornett &mdash; who finished with 122 yards for Aviano &mdash; scored from a yard out.

Kubas scored from a yard out to open the second quarter and an Aviano fumble set up D&rsquo;Vonte Dawson&rsquo;s 31-yard touchdown to bring Baumholder within 20-18. But a 31-yard Cornett run set up a 35-yard pass from Webb to Cornett to put the Saints up 27-18 at the half.

Baumholder scored its final touchdown in the third on Dawon&rsquo;s 19-yard run. The sophomore finished with a game-high 128 yards on the ground.

A 40-yard pass from Webb to Myron McRae and a 11-yard run that started with Alex Ramos carrying the ball, then pitching back to Webb as he was tackled, capped the scoring for Aviano.