Rules governing long trips are there to prevent incidents 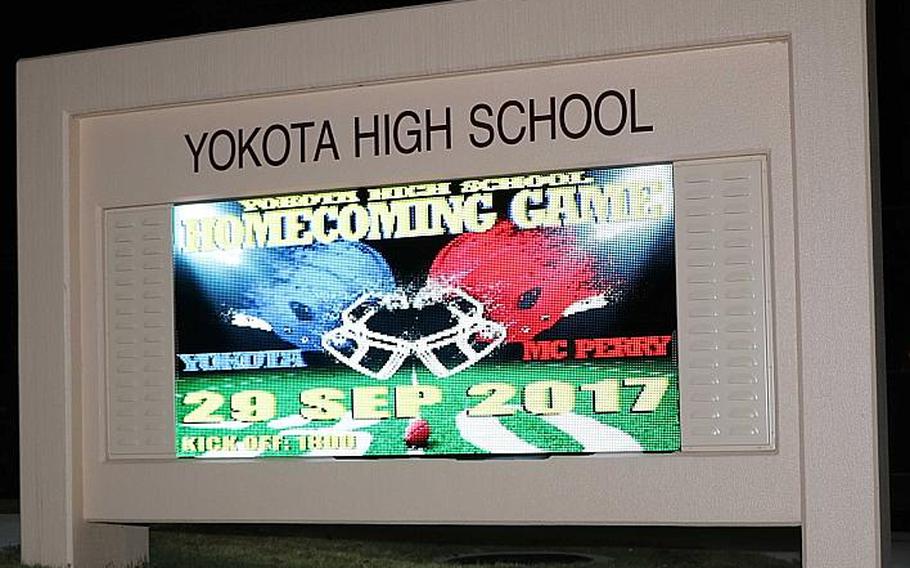 The marquee in front of the new Yokota High School touts the homecoming football game Friday against Matthew C. Perry. The visiting and defending Far East Division II champion Samurai have to travel between 11 and 13 hours, sometimes longer, from Marine Corps Air Station Iwakuni by bus to Yokota, which can sometimes be an undertaking. (Greg Holladay/Special to Stripes)

Garrett Macias and his Matthew C. Perry football teammates were settled in early Thursday evening for their bus ride, as long as 13 hours, to Yokota, their minds focused on a possible berth in the Far East Division II football title game.

But in a way, that journey began weeks earlier, before the season, when some 30 Perry football players put ink to paper. They each signed a code of conduct, a multiple-page package in which players agree to behave in an appropriate manner.

In the wake of what happened earlier this month, when seven Kadena starters were suspended for an undisclosed violation, the Samurai approached Friday’s game with parts of their minds on the bigger picture.

“We’ve put in too much time and effort to throw it all away,” Macias said. If similar misbehavior was to happen, “I’d be very disappointed. We have a strict team policy, even more strict than the district. We can’t have individuals act out and let the team down.”

Macias said he was aware of what occurred earlier in September. “It’s definitely not worth it,” he said. “One night is not worth risking the entire season.”

As a “just-in-case,” Macias’ father, Frank, Perry’s head coach, rented a van to allow seven assistant coaches to make the trip with the Samurai. “I’m confident that we have strong leadership” on the team, the elder Macias said. “It helps having nine coaches, too.”

Procedures are put in place so that the rules of engagement are understood: Players are there to compete on behalf of the school, and there are consequences should they stray.

“As long as you lay everything out, you have an itinerary, you have rules, you share them and the parents and kids all know it,” said Tom McKinney, DODEA-Pacific’s athletics coordinator and for 13 seasons coach of Kadena’s cross country team.

“You’re going on that trip … to focus on the game and represent your school; you’re not trying to embarrass the school, your team or your family,” said Anthony Macaluso, a football and soccer player and wrestler who graduated from Kubasaki last spring.

“It gets you ready for life,” Macaluso said. “You have things to do and you go get them done.”

DODEA-Pacific has a code of conduct for Far East athletics and academics events. Each district also has codes of conduct. Should a violation occur, a suspension is imposed, with the possibility of appeal should parents or students file one. In some cases, suspensions are overturned; in others, they stand.

Long-haul bus trips can last 11 to 13 hours between Yokota and Iwakuni, 8 to 10 hours between Tokyo and Misawa Air Base. And a journey that begins late Thursday and lasts through midday Sunday involves more than loading equipment in the lower bay and the kids into their seats.

Perry tennis and soccer player Kai Lange likens those trips to the lines in an old Bob Seger song: “When you’re riding 16 hours and there’s nothing much to do. And you don’t feel much like riding; you just wish the trip was through.”

Players can only catch up on schoolwork, nap, play cards and watch the same movies for so long. “After all those hours, I’d rather be done with it,” Lange said.

The coaches, meanwhile, have their hands full: ensuring kids have enough to do and not leaving anybody behind after a 15-minute rest at a truck stop.

That can be on a bus or during an overnight stay at an on-base lodge. Even if a coach and his staff take every precaution, including putting strips of tape on every door, “a coach has to sleep sometime,” the elder Lange said.

“You’re on call 24 hours on these trips and when something happens, it’s always your fault,” he said. “And some of these coaches are brand new at it. There’s a lot of responsibility that goes with this.”

Misbehavior can occur long after coaches turn in for the night. Joel Chalmers, a 2002 Robert D. Edgren graduate, recalls a long-haul to Iwakuni when teammates forcibly shaved the head of a younger player.

“It took a lot of courage for him to initially say no and later speak up and turn his teammates in. People make mistakes,” said Chalmers, now a captain stationed at Vandenberg Air Force Base, Calif. “It’s what you learn from your mistakes that help you develop your character.”

What Chalmers says he learned from that was: “Don’t be a bystander. Speak up when you know something is not right. It probably would have only taken one person in that room to say: ‘Guys, this is wrong.’”

“You put your future at risk,” Macaluso said. Even when teammates swear each other to secrecy, “somebody’s always going to find out. Word travels pretty fast.”

“You hope that kids learn from other kids’ mistakes, and learn not to make those same mistakes,” McKinney said.