Rugby fans from all over flock to France U.S. Eagles supporter Brian Lang, of New York, wearing a red, white and blue shirt and face paint, stands out from others in the crowd at a Rugby World Cup match at Lens, France. (Seth Robson / S&S)

U.S. Eagles supporter Brian Lang, of New York, wearing a red, white and blue shirt and face paint, stands out from others in the crowd at a Rugby World Cup match at Lens, France. (Seth Robson / S&S) 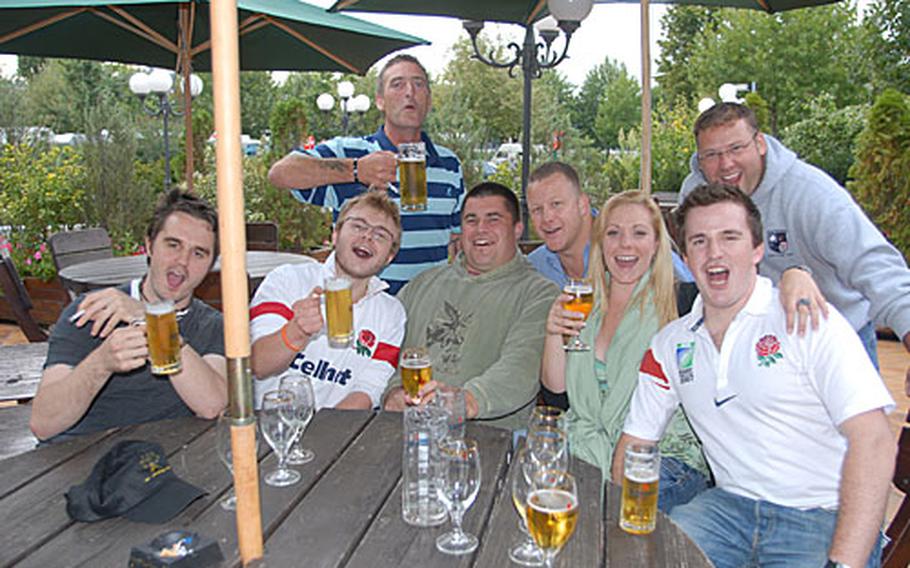 The event sold more than 2 million advance tickets, draws a cumulative world television audience of more than 3 billion and is rated the world&#8217;s third-largest sporting event after the Olympics and soccer&#8217;s World Cup.

When play began Friday in Paris, buildings around the Arc de Triomphe were painted with giant rugby players and a massive rugby ball dangled beneath the Eiffel Tower.

Locals packed the Stade de France to watch the French team, known for its attacking flare, take on Argentina. Fans were stunned when the French, touted by some as likely finalists, were upset 17-12.

The next day, the U.S. team kicked off its World Cup campaign against England at Lens. While the Americans, called the U.S. Eagles, lost to the defending world champs, their fans appeared far from disappointed.

At the stadium the Americans found themselves surrounded by a sea of red-and-white England supporters singing &#8220;Swing Low, Sweet Chariot,&#8221; the team song.

New Yorker Brian Lang stood out from the Brits in a red, white and blue U.S. shirt and face paint as he cheered for the Eagles.

Lang, a who works in Paris, said it was his first rugby game.

Also rooting for the Eagles was a group of airmen and U.S. civilians based at RAF Mildenhall, England.

Rick Cook, who sells cars to airmen, said he recently started a rugby team of mostly Americans. Four players were in France over the weekend to support the Eagles, he said.

Joe Schwab, an Air Force pilot from Mildenhall at the game, said he hoped to see the Eagles score a try (touchdown).

England won 28-10 but the mostly amateur U.S. team claimed a moral victory by competing well against the English professionals whose salaries rival those of NFL players.

Rugby, the sport from which American football was developed, is played in more than 200 countries and draws huge crowds in places such as Britain, France, Italy, New Zealand, Australia, South Africa and Japan. The main differences between rugby and American football include rugby&#8217;s prohibition on pads, helmets and forward passes.

Schwab said part of the game&#8217;s appeal is the friendly attitude of the fans.