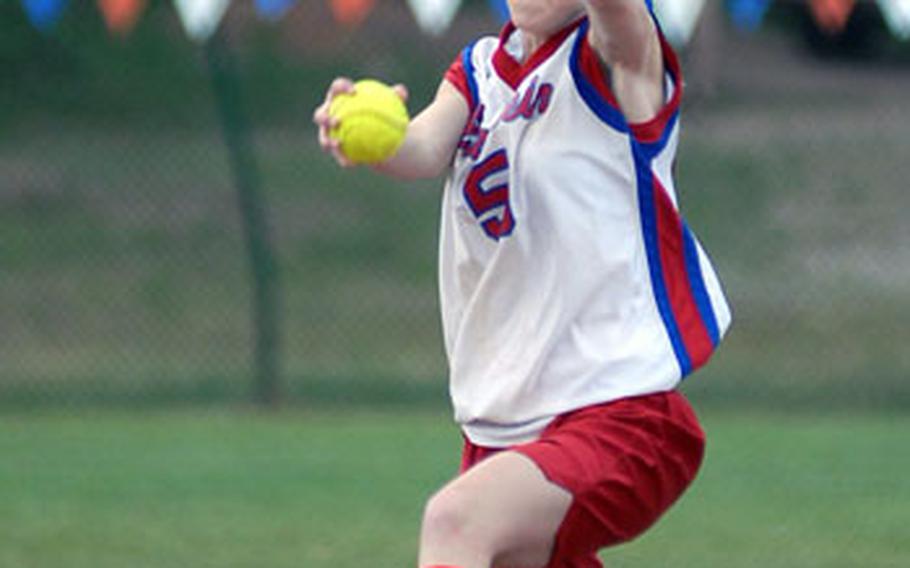 Ramstein’s Lindsey Jones, above, and Maddie Byrd, below, each pitched three perfect innings in rain-shortened victories against Division IV Alconbury on Friday. (Michael Abrams/Stars and Stripes)

Ramstein’s Lindsey Jones, above, and Maddie Byrd, below, each pitched three perfect innings in rain-shortened victories against Division IV Alconbury on Friday. (Michael Abrams/Stars and Stripes) 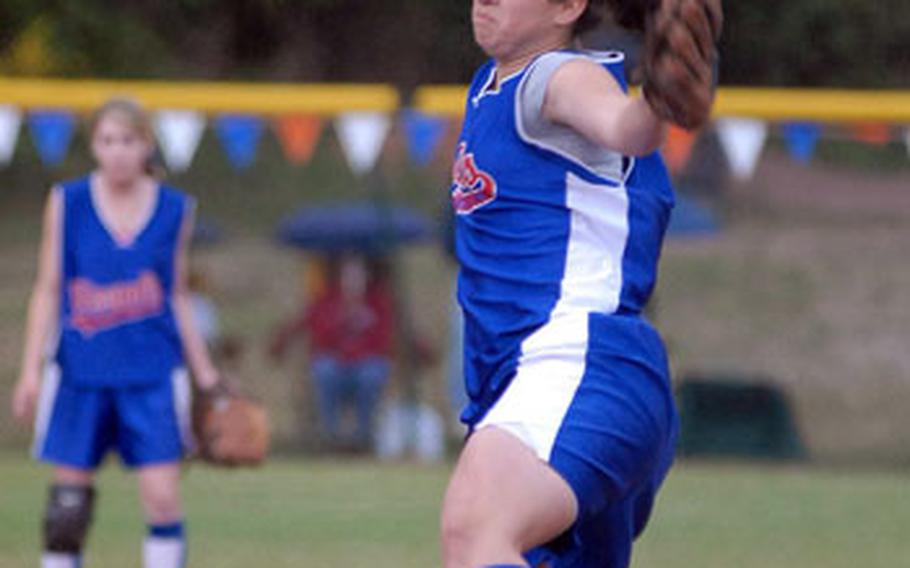 RAMSTEIN AIR BASE, Germany &#8212; After waiting four weeks to get in their first games of the season, Ramstein junior Lindsey Jones and sophomore Maddie Byrd weren&#8217;t about to let Friday&#8217;s drenching rain spoil their 2009 debuts. Each pitched three perfect innings of softball as the Division I champion Lady Royals claimed run-rule-shortened 18-0 and 22-0 victories over D-IV Alconbury.

"It was raining the whole time," said Jones, who came back to claim another rainy-day shutout, 12-0 at D-III Baumholder on Saturday. "You just had to adjust."

The Baumholder game provided Jones some perspective on Friday&#8217;s feat, even given the David-vs.-Goliath nature of the games that pitted the largest school in DODDS-Europe against one of the school system&#8217;s smallest.

"It was a challenge," she said about the abysmal conditions, "but you just had to work through it."

Byrd struck out seven of the nine batters she faced Friday; Jones fanned eight of the nine who stepped in against her on Friday and nine more on Saturday.

"They are two of the best in the league at what they do&#8230;," e-mailed John Gilmore, coach of the D-I Lakenheath Lancers, who host Ramstein this weekend.

Jones and Byrd said they&#8217;re looking forward to the elevated level of competition they&#8217;ll see in the next two games.

"We&#8217;ll get a chance to see if we have a good defense," Jones said about playing their archrivals. "We can play real softball, steal bases, all that."

And there&#8217;ll be lots of motivation, both Byrd and Jones said, whatever the outcomes against the school that won the four European D-I titles Ramstein didn&#8217;t.

Jones and Byrd are familiar with playing good teams. The two have played on a Ramstein-area team, the Ambassadors, that competed in the Senior Division Little League Softball World Series in Delaware last August.

Was it unnerving to face the talent pools that flood that sort of event?

"The other teams there play a ton of games," said Byrd, 15, pinpointing the disadvantage Europe-based American teams always face in the States. "They&#8217;ve all played together all their lives."

Still, Byrd said, the Ambassadors won three of the five games they played in the States.

Fun&#8217;s the key word for Jones and Byrd, multisport athletes who unhesitatingly named softball as their favorite sport.

And their history of playing together, while not at the level of stateside powers, isn&#8217;t bad in light of the transient nature of the European experience for most Americans.

"I played three years in the (Ramstein) youth program," said Jones, in her sixth year as a resident of the community here.

"More than half of us," added Byrd, gesturing toward her 2009 Ramstein teammates, "played on the Ambassadors."

For his part, Ramstein coach Kent Grosshuesch is delighted to have Jones and Byrd playing together again in Ramstein red, white and blue.

"We&#8217;re pretty lucky to have two pitchers that good," he said. "We have a great youth program here with lots of good volunteer coaches. We always get good players coming into our program."