Buy Photo
Wiesbaden senior KC Kerker tries to slide into home plate while avoiding a tag from Ramstein sophomore Matt Sharpy Saturday during opening day of baseball for DODDS-Europe. Kerker was ruled out on the play and Ramstein went on to sweep the doubleheader against the Warriors. (Mark Patton/Stars and Stripes)

Buy Photo
Wiesbaden senior KC Kerker tries to slide into home plate while avoiding a tag from Ramstein sophomore Matt Sharpy Saturday during opening day of baseball for DODDS-Europe. Kerker was ruled out on the play and Ramstein went on to sweep the doubleheader against the Warriors. (Mark Patton/Stars and Stripes) 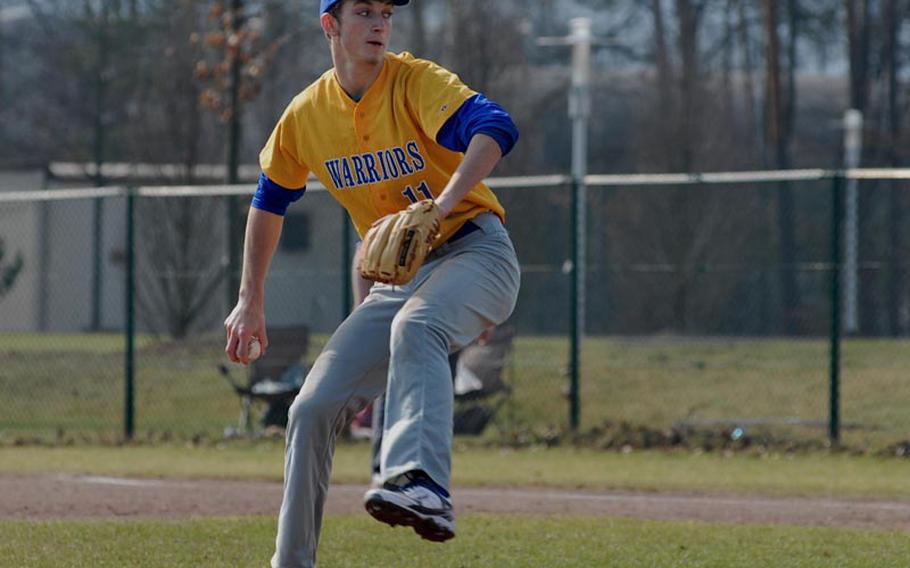 Buy Photo
Wiesbaden senior Gary Miskovsky showed off his curveball Saturday against the Royals of Ramstein. Despite his efforts, the Warriors couldn't overcome big deficits, as Ramstein swept the doubleheader. (Mark Patton/Stars and Stripes) 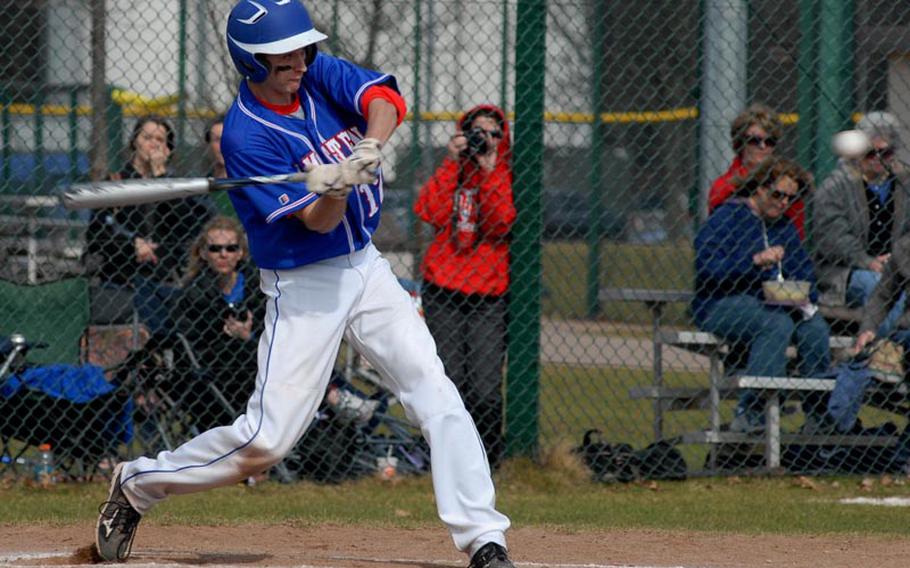 Buy Photo
Wiesbaden senior Dan Aslakson tries to convert the double play as Ramstein sophomore Matt Sharpy charges to second base Saturday. The Royals swept a doubleheader against the Warriors at Ramstein Air Base. (Mark Patton/Stars and Stripes) Buy Photo
Ramstein senior Caleb Guerrido watches the ball during Saturday baseball action against the Warriors from Wiesbaden. Ramstein swept a pair of games Saturday to start off the season 2-0. (Mark Patton/Stars and Stripes) 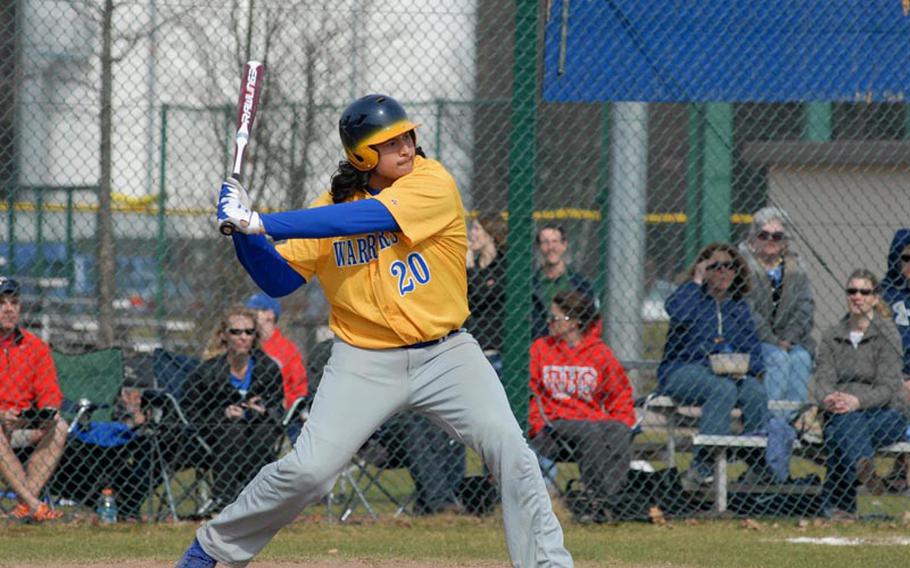 Buy Photo
Wiesbaden sophomore Justin Jones prepares to swing at the ball Saturday against Ramstein. Jones and his teammates lost a pair of games to the Royals. (Mark Patton/Stars and Stripes) 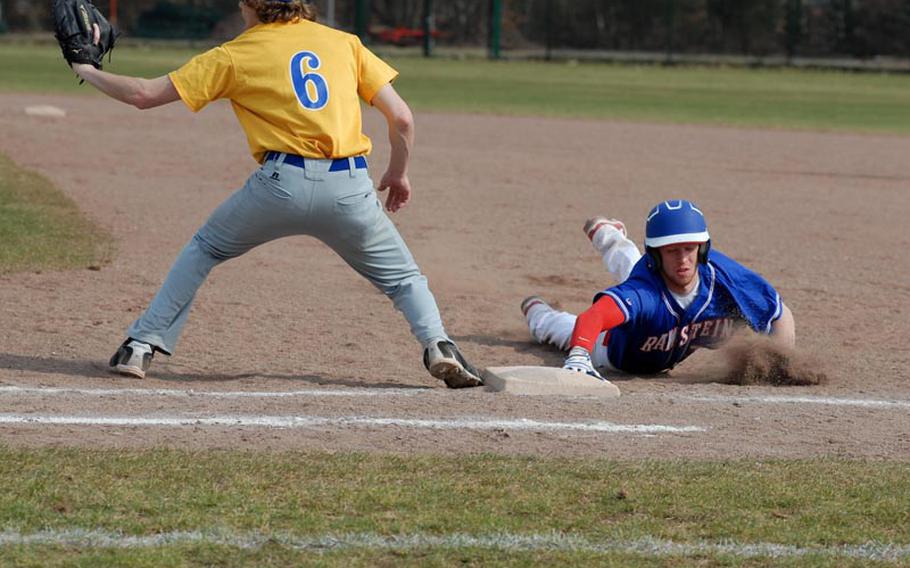 Buy Photo
Ramstein junior Justin Pendergrass slides back to first base ahead of the tag from Wiesbaden senior John Spiszer Saturday at Ramstein Air Base. The Royals dominated a pair of games against Wiesbaden to open up their season 2-0. (Mark Patton/Stars and Stripes)

RAMSTEIN, Germany - The Ramstein Royals rode strong pitching and solid defensive play to start off this year&rsquo;s DODDS-Europe baseball action with an opening-day pair of victories against Wiesbaden.

Saturday&rsquo;s doubleheader saw a Ramstein squad hoping to take the first step in reclaiming its 2009 Division I title. The Royals have lost by a single run in each of the last two championship games.

With 16-1 and 10-1 victories on Saturday over Wiesbaden, Ramstein looks like a team to reckon with once again.

Royals senior Jon Grotelueschen looked strong on the mound, hurling a no-hitter through three innings. Grotelueschen was replaced by sophomore Tyler Hughes for the fourth and final inning after his pitch count reached 58.

Wiesbaden senior Gary Miskovsky was the standout for the Warriors in Game One as he scored the lone run and showcased an impressive curve as a relief pitcher.

The second game saw the Royals jump in front once again, riding a three-run opening frame.

Wiesbaden pitcher Justin Jones, a sophomore, pitched a strong outing. But he couldn&rsquo;t control the defensive play behind him. Warriors skipper Steve Jewell vowed to work on his team&rsquo;s fielding, as he watched them mount up errors.

Trailing 3-1 in the bottom of the second, the Warriors&rsquo; best chance of the afternoon to jump in front was foiled.

With runners on the corners and no outs, Labit was able to strike out John Spiszer for the first out. Grotelueschen, playing catcher in the second game, tried to pick off KC Kerker at third base. The Royals catcher threw the ball to his third baseman Sharpy, catching Kerker off guard. Kerker sprinted to home, but the umpire ruled that Sharpy made the tag, leading to the Warriors second out.

Wiesbaden wasn&rsquo;t able to gather up another rally as Labit settled into a zone, giving up just three hits. He also excelled on offense, going three for three in the afternoon game with a pair of RBIs.

Porter said he thinks his team is further along than it was last year at season&rsquo;s beginning, but noted some room for improvement.

&ldquo;I was a little disappointed with our hitting, but hitting will come with a lot of at bats.&rdquo; Porter said.

Wiesbaden, a team that was labeled as inexperienced last year, saw some bright spots Saturday, despite the scoreboard.