Rota matches up well with big schools in Stuttgart 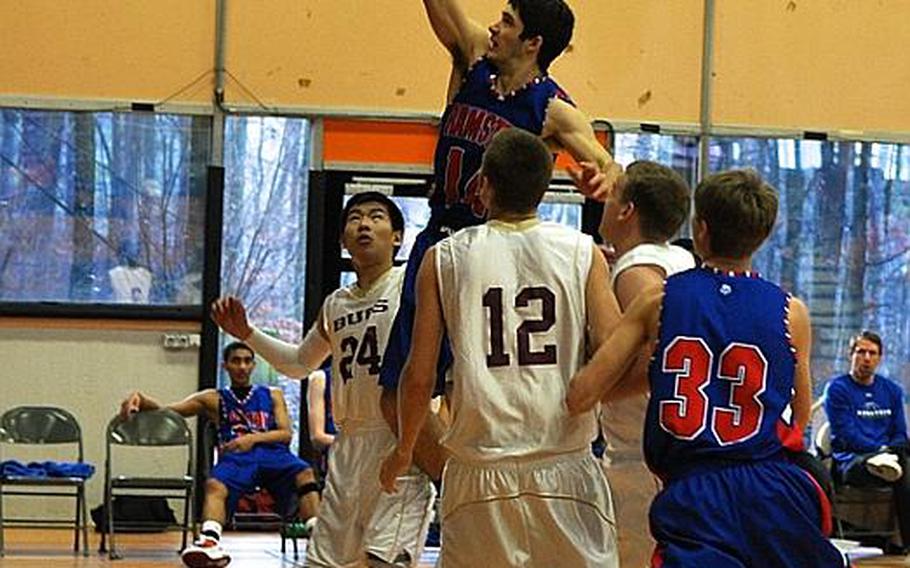 Buy Photo
Ramstein's Steven Groenheim rises above his Baumholder opponents to sink his shot Wednesday during a three-day tournament hosted by Patch High School. Ramstein won to move on to the semifinals. (David Rogers/Stars and Stripes)

Buy Photo
Ramstein's Steven Groenheim rises above his Baumholder opponents to sink his shot Wednesday during a three-day tournament hosted by Patch High School. Ramstein won to move on to the semifinals. (David Rogers/Stars and Stripes) 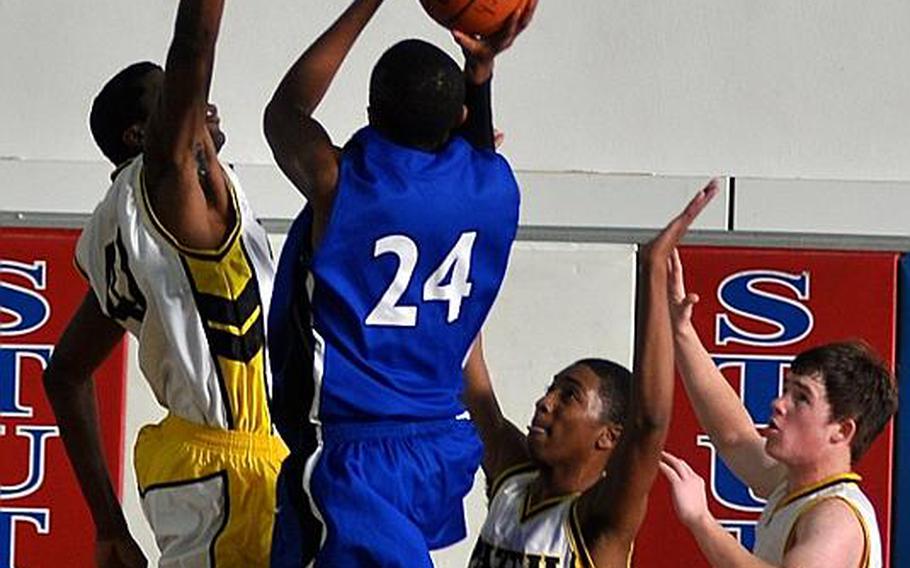 Buy Photo
Rota's Tre'Von Owens, Stars and Stripes' player of the year last season, leaps for the goal against Patch players Wednesday during a three-day tournament hosted by Patch High School. Rota beat Patch to move on to the semifinals. (David Rogers/Stars and Stripes)

STUTTGART, Germany &ndash; Two days into an event taking place thousands of miles from the state of Indiana, &ldquo;Hoosiers&rdquo; is the overriding theme so far in the Patch High School Winter Basketball Tournament.

Rota isn&rsquo;t exactly tiny Hickory depicted in the size-doesn&rsquo;t-matter film, but the defending European small-schools champions downed their second Division I team in as many days Wednesday. The Admirals claimed a 47-42 quarterfinal victory over Patch to move into Thursday&rsquo;s semifinals of this 12-team boys&rsquo; event.

Rota, led by 24 points from senior Tre&rsquo;von Owens, earned a rematch against defending big-schools king Heidelberg in Thursday&rsquo;s 11:30 a.m. semifinal game at the Patch Barracks gym. Rota downed Heidelberg by 13 points in Tuesday&rsquo;s pool-play game, but Rota coach Ben Anderson is sure his team will be playing a different Lions&rsquo; team Thursday morning.

&ldquo;It&rsquo;s hard to beat a team twice,&rdquo; he said Wednesday. &ldquo;They&rsquo;ll be out for revenge. They&rsquo;ll give it everything they&rsquo;ve got.&rdquo;

The Admirals and Panthers each gave everything they had in Wednesday&rsquo;s 24-minute game. Owens, Stars and Stripes&rsquo; male cager of the year who has accepted a scholarship from University of California-Riverside, hit consecutive 3-point shots in the first quarter to get the Admirals started. After Patch had clawed back to take a 32-30 lead in the third period, Owens canned the bucket to tie the game, then added another basket, a three-point basket and two free throws the rest of the way to make sure the host team would fall short.

&ldquo;We&rsquo;ve got to keep playing hard,&rdquo; Owens said about the rematch with Heidelberg, adding that he relishes the chance this tournament provides for tests against the big schools. &ldquo;We always wanted more competition.&rdquo;

Inside presence Tim Drake, whose presence on the bench for much of the second and third quarters because of fouls facilitated the Patch comeback, also enjoys playing the big schools.

&ldquo;It keeps you prepared,&rdquo; he said. &ldquo;Every game is hard. You have to focus all the time.&rdquo;

Newcomer Mark Oden, a transfer from the state of Washington, added 17 points for the Admirals, whose hunger to play has led them to devote nearly as much time to fund-raising to pay for traveling as they have spent on court.

&ldquo;It&rsquo;s really hard to get games in Spain,&rdquo; said Anderson, whose team will face DODDS-Europe competition just once more &ndash; a weekend date next month at Alconbury &ndash; before traveling to Wiesbaden in February in defend its D-III crown.

Heidelberg reached the semis with a 60-52 verdict over a German club, SC Sindelfingen. Marcel Simon and Sam Rosario, who was a perfect 12-for-12 from the line, each scored 21 points.

In Thursday&rsquo;s other semifinal, scheduled for 11:30 a.m. at the Patch High School gym, Division I power Ramstein will be taking on Black Forest Academy of Division II. Ramstein defeated Baumholder to earn its berth; BFA bounced Lakenheath 38-33 in its quarterfinal match-up.

Lakenheath had clawed to 34-32 down on Brinsley Walker&rsquo;s put-back basket with 1:05 to play, and trimmed its deficit to one when Alleric Jones converted one-of-two free throws with 26.7 seconds to go.

&ldquo;(Patch coach and tournament organizer) Bill Lassetter has done a great job giving us this opportunity,&rdquo; he said. &ldquo;It&rsquo;s a great chance to give our players some competition during the holidays.&rdquo;