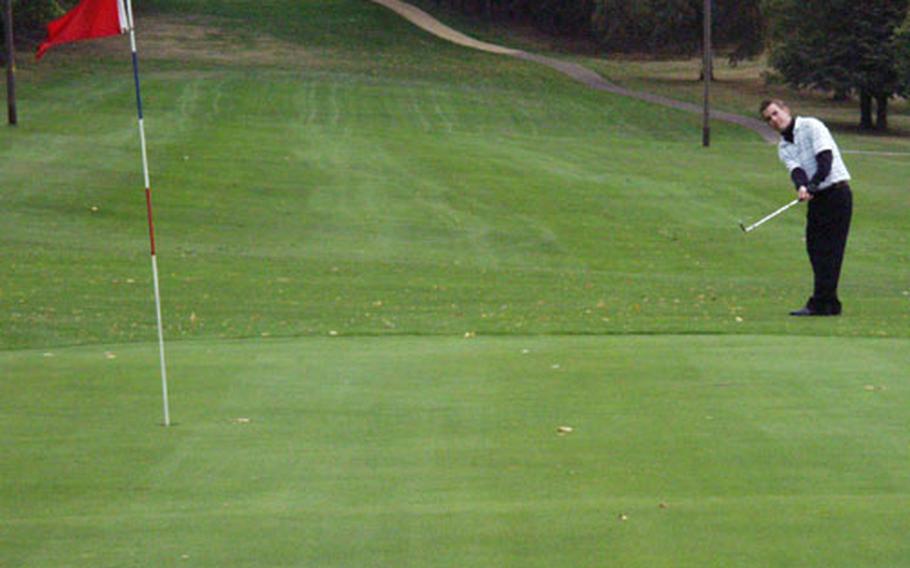 Baumholder&#39;s Charles Otterstedt chips on to the 18th green Wednesday during the first round of the DODDS-Europe high school golf championships at the Rheinblick golf course. The tournament ends Thursday. (Rusty Bryan / S&S)

(First-round scores at end of story)

WIESBADEN-DOTZHEIM, Germany &#8212; On a chilly, gray, breezy day unlike what they usually see in Spain, Rota&#8217;s Gilbert Mendez and Jason Allard stood 1-2 after the first day of the 36-hole DODDS-Europe high school golf championships.

Mendez scored 41 points under the modified Stableford scoring system, which awards one point for double-bogey, two for bogey, three for par, four for birdie and six for eagle or ace.

There&#8217;s no team scoring, but Rota&#8217;s other players scored well. Johnny Orem finished with 31 and Jim Connelly had 26 for the Division III champions.

Mendez said Rheinblick&#8217;s tight fairways presented a challenge to a golfer used to the wide-open spaces of southern Spain.

Allard overcame a front-nine total of 17 points and scored 20 on the back nine despite putting difficulties.

Conditions besides the weather helped hold the scoring down, Allard said.

Tournament official Kent Grosshuesch of Ramstein said the decision to use Stableford scoring instead of the planned stroke play came at a Wednesday morning coaches&#8217; meeting.

Division I champion Frances Smythe of W&#252;rzburg piled up a huge lead over the girls field with 24 points. She was 12 points ahead of Lakenheath&#8217;s Sarah Wells after the first 18.

All golfers are scheduled to return to the course at 9 a.m. Thursday for the tournament&#8217;s final 18 holes, leaving the leaders all night to contemplate everything that could go wrong overnight.

WIESBADEN-DOTSHEIM, Germany &#8212; Wednesday&#8217;s scores after the first round of the two-day DODDS-Europe individual golf championships at the par-72 Rheinblick Golf Course. Scoring is modified Stableford, one point for double-bogey, two for bogey, three for par, four for birdie and six for eagle or ace. There is no team scoring: