Rosalie kept focus on another championship 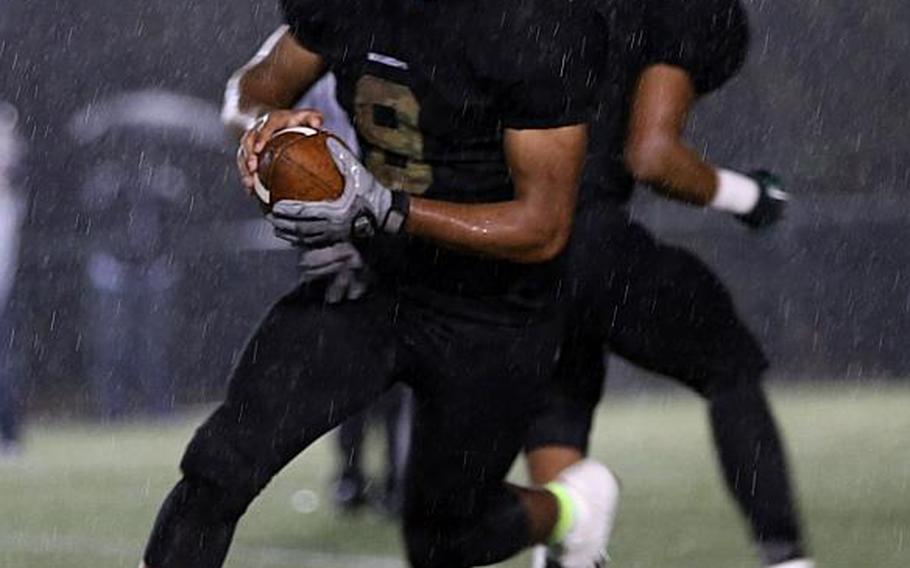 So many things could have gone off the rails for DeAndre Rosalie and Daegu football this season.

The Warriors began the season without the coach who had won four Far East Division II championships: Ken Walter transferred to Rota in Spain. Graduation and transfers had left the Warriors without key elements from the past couple of seasons.

Then at midseason, the Warriors learned that Osan, one of their chief DODDS Korea D-II rivals, was folding its tent due to lack of players, leaving them scrambling to fill two vacancies in the schedule.

“We were devastated, especially for the seniors to think that your senior season may be only five games and one of those being the championship,” said Rosalie, Daegu’s senior quarterback.

After a scramble, Daegu ended up playing Songdo, a Korean school, and Matthew C. Perry – the team it beat for the 2014 title that just happened to have a weekend off.

That set up the team’s final game: A 51-36 triumph over Yokota for its third straight Far East D-II championship.

Through it all, Rosalie played a key role, rushing 101 times for 762 yards and eight touchdowns and going 37-for-78 for 435 yards and six scores. For that plus the D-II title, Rosalie earns Stars and Stripes Pacific high school football Athlete of the Year honors.

“He always tried to be out front” as an encourager and leader of the team, coach Phillip Loyd said of Rosalie. When things weren’t going right, team meetings would follow and “he would remind them to keep their focus, do what they were supposed to do, remind them why they were here.”

At season’s start, another D-II championship seemed possible, but the mountain was definitely higher to climb, Rosalie said.

“My biggest concern was getting away from the system that got us two championships,” Rosalie said. “It was a completely new coaching staff, but a good amount of returning players who were familiar with the previous system.”

Things went hot and cold, a couple of victories over Humphreys that got the Warriors on track to host the D-II title game Nov. 7 against Yokota. But then came losses to Seoul American – which dethroned Daegu as DODDS Korea champion – and to Singapore.

In those defeats, Rosalie said, “we didn’t play the football we were capable of playing. We were a much better team than we showed and we were going to prove that to everybody. And I feel like that’s exactly what we did.”

The early parts of the games against Perry and Yokota didn’t bode much better. Miscues and turnovers – six total in the first half against both teams – threatened to derail that title bid.

“We knew we needed to focus and execute and play Warrior football,” Rosalie said.

“We just came together and told ourselves that we weren’t going to lay down for anybody, we were going to go out with a fight and play like we have nothing to lose.”

It all spelled championship, one that Rosalie said felt more special than the previous two.

“It’s really hard to describe, to work all season with a group of guys and to be able to celebrate a championship with those same guys on the field that it all started on, it’s beautiful,” he said.