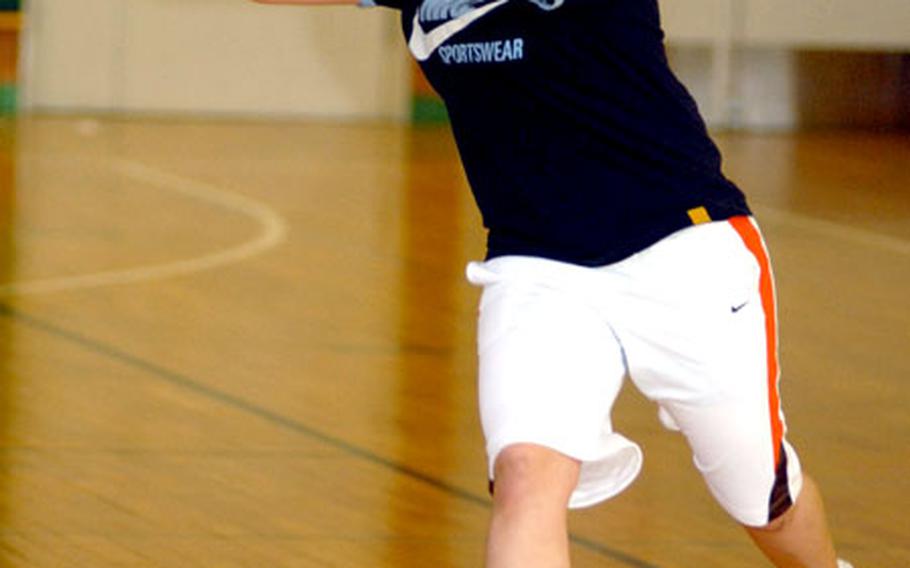 Edgren senior guard Krystine Horsley passes during practice at Misawa Air Base, Japan. The Eagles went 3-12 in the regular season (2-12 DODDS-Japan), but won their last two games, giving Horsley what she says is hope for a strong performance in the Class AA tournament. “This is my last year,” she said. “I want to bring something home.” (Dave Ornauer / S&S)

Edgren senior guard Krystine Horsley passes during practice at Misawa Air Base, Japan. The Eagles went 3-12 in the regular season (2-12 DODDS-Japan), but won their last two games, giving Horsley what she says is hope for a strong performance in the Class AA tournament. “This is my last year,” she said. “I want to bring something home.” (Dave Ornauer / S&S) 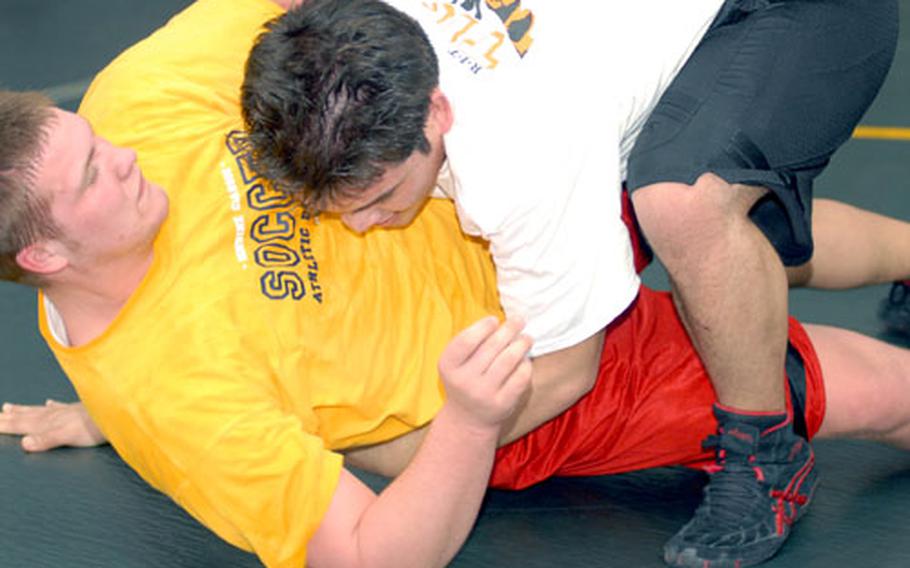 Edgren senior heavyweights Niels Johnson (left) and David Leh work on moves during a recent practice. The Eagles return a defending champion in Kevin McDonald (168) and a veteran core including Leh, Johnson and junior 180-pounder Andrew Blankenship, giving the team hope of a top-four finish in the Far East wrestling tournament this week. (Dave Ornauer / S&S)

The records of Robert D. Edgren&#8217;s basketball and wrestling teams, for instance, might seem pedestrian, but some coaches call them the &#8220;teams people would least want to play&#8221; during the Far East tournaments.

Edgren&#8217;s boys basketball team began the season with three injured starters and lost its first six games &#8212; but the Eagles won eight of their last 10, including Jan. 13 and Jan. 26 against defending Class AA champ Yokota.

The best finish for Edgren&#8217;s wrestling team was second place in a DODDS-Japan tournament they hosted on Dec. 2. Yet the Eagles enter the postseason with defending Far East 168-pound champion Kevin McDonald and two third-place finishers from last year. From 148 up, their lineup is better avoided, indicated Yokota coach Brian Kitts.

The compliment is sweet, indicated Eagles wrestling coach Justin Edmonds, given that Edgren is more than 400 miles from the nearest DODDS-Japan school and participates in fewer contests than its Kanto Plain counterparts.

For instance, Edgren&#8217;s boys basketball team has played 16 regular-season games; Yokota and Zama each have played 25.

Yet fueled by last year&#8217;s Far East performance, the community and school have rallied around the team, which will bring a school-record 12 varsity wrestlers to Far East &#8212; a lineup Kitts calls the strongest in Eagles history.

Similarly, youngsters Britni Bledsoe and Vanessa Mandelin are taking on a larger role for the Eagles girls.

The turnaround can be credited in part to a change in Edgren&#8217;s athletics culture. Coaching continuity leads to players&#8217; understanding and execution, football coach Chris Waite said.

&#8220;We have some great coaching going on up here and a student body that&#8217;s motivated,&#8221; said Waite, who coached Edgren to its first Class A title in November.

Waite said he intends to stay for a while, as does athletic director Jim Burgeson.

Thibert&#8217;s been coaching boys basketball for six seasons and says he wants to stay for 10 more. No wrestling coach had stayed at Edgren for three seasons until Edmonds came along. Sarah Richardson is in her 18th season with girls basketball.