Coach Tim Pujol, in his fifth year at the helm of the Yokota Panthers, faces a stern rebuilding task. Only seven players, six of them starters, return from his 2002 squad. (Dave Ornauer / S&S) 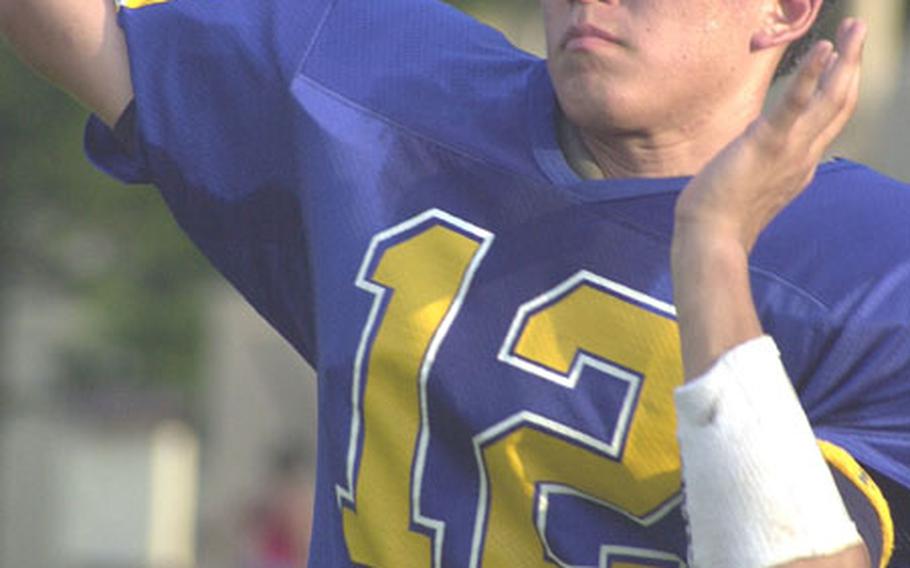 Great running backs seem to gravitate to the Yokota High School football program, and the 2003 season figures to be no different.

Just two weeks before the start of the Japan Football League season, a pair of fresh runners, described by Panthers coach Tim Pujol as &#8220;impact players,&#8221; stepped off the plane and into the Yokota huddle.

Roy Roach, a senior, and brother Chris, a junior, have already made big contributions since transferring from Virginia.

In a 64-6 preseason romp Aug. 30 over the Urawa Mad Dogs, a Japanese team, Roy Roach amassed almost 300 all-purpose yards, ran for three touchdowns and returned an interception for another. Chris Roach picked off a pass and ran five times for 30 yards as the Panthers piled up 487 yards on 52 attempts.

Pujol, in his fifth season at Yokota, hopes his newest discoveries will follow in the footsteps of Mike Chamberlain (2,087 all-purpose yards, 23 TDs in 2002) and Darren Taylor (1,802 rushing yards in 2001) and keep Yokota&#8217;s ground machine rolling.

Roy Roach becomes the team&#8217;s featured back and will also see time at linebacker. Chris Roach steps in at wingback and flanker, and will start at free safety.

After hearing about Yokota&#8217;s latest talent infusion, Nile C. Kinnick coach Robert Stovall, whose team was the last to win the Kanto Plain title before Yokota&#8217;s run, rolled his eyes.

Pujol arrived at Yokota in 1999, and has kept a core group of assistants, such as Matt Grant, with him throughout his tenure.

Pujol is more optimistic than he was two weeks ago, with just seven returning players and a quarterback, Shawn Novak, who has never played football before.

Another title for Yokota is hardly etched in concrete.

Stocked with experience and size &#8212; the line averages 240 pounds &#8212; the Trojans hope to overcome the lack of focus that&#8217;s historically plagued them. After starting strong, Zama has tended to fold after a crucial defeat.

Stovall could say the same about Kinnick, which has also enjoyed an influx of solid talent, including senior lineman Jacob Parker (from Texas) and brothers Brenden and Leonard Lynce (Virginia).

His line, averaging 6-foot-1, 210 pounds, is comparable to the front Kinnick had when it captured the Kanto title in 1996.

Those three teams, along with rebuilding squads from Robert D. Edgren of Misawa Air Base and Matthew C. Perry Samurai of Iwakuni Marine Corps Air Station, begin the season Friday, when Yokota visits Zama and Edgren travels to Kinnick.

The five JFL teams play a double round-robin schedule, carrying through to Nov. 8. The JFL team with the best record will travel to Okinawa for the 5th Rising Sun Bowl, hosted this year by the Okinawa High School Athletic Association champion.

Zama, Yokota and Kinnick also compete with the American School In Japan for bragging rights in the Kanto Plain. ASIJ, an independent international school, is not eligible for the Rising Sun Bowl.