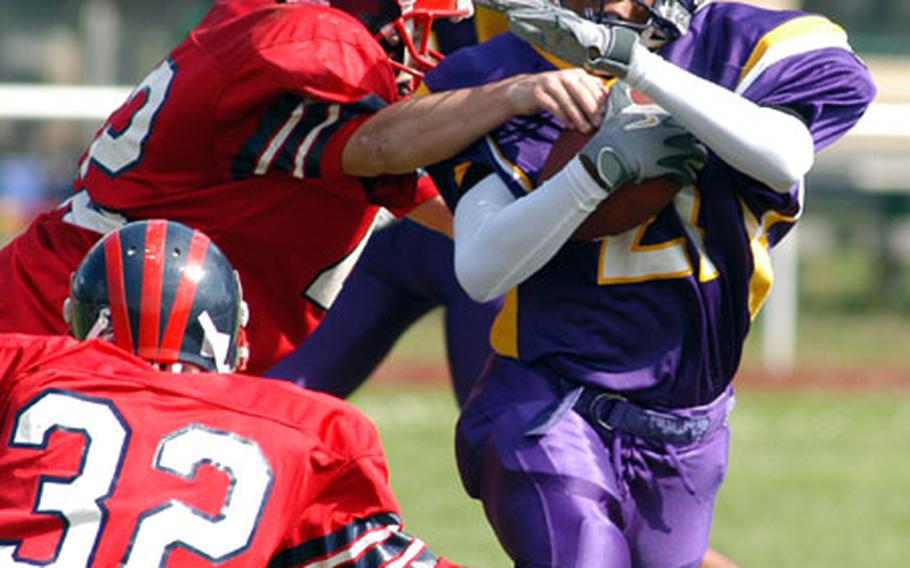 Mannheim&#39;s Jermaine Jones breaks a tackle attempt by Aviano&#39;s David Meade, left, as Mead&#39;s teammate Jaques Watson comes up to help out. Mannheim beat visiting Aviano 30-14 in the first game of the 2003 season for both teams. (Michael Abrams / S&S)

Mannheim&#39;s Jermaine Jones breaks a tackle attempt by Aviano&#39;s David Meade, left, as Mead&#39;s teammate Jaques Watson comes up to help out. Mannheim beat visiting Aviano 30-14 in the first game of the 2003 season for both teams. (Michael Abrams / S&S) 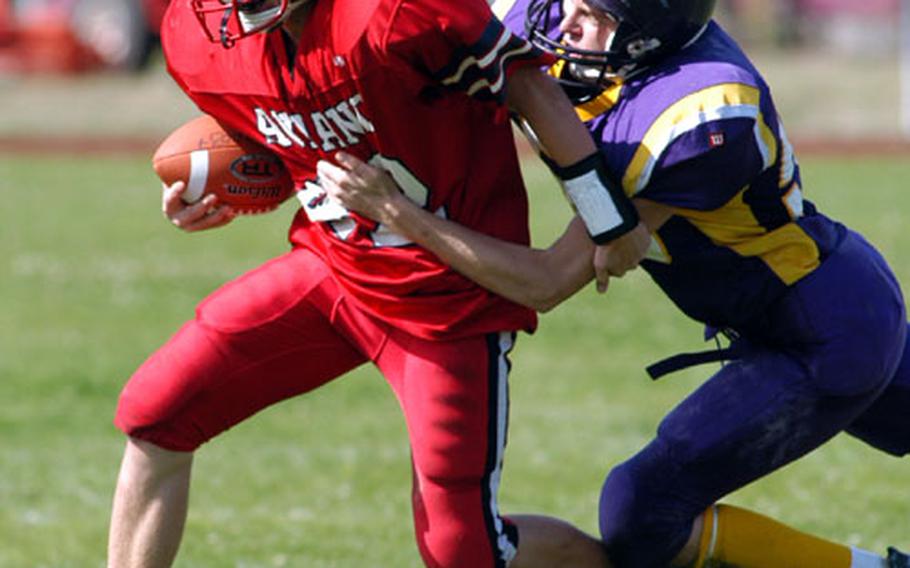 Aviano&#39;s Mikal Fair, left, rushes for a gain before Mannheim&#39;s Chris Camron can drag him down. Mannheim won the Division II match-up 30-14 on opening day of the DODDS 2003 football season. (Michael Abrams / S&S) 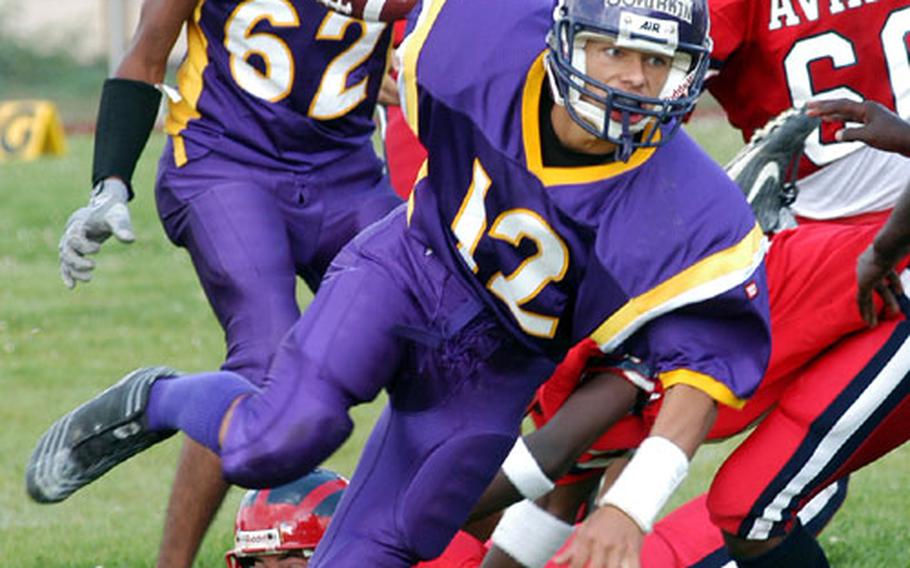 Mannheim quarterback Alex Sokirkin breaks free for a gain against the Aviano Saints in the season opener for both teams in Mannheim on Saturday. Sorkirkin rushed for two touchdowns and threw for two more in Mannheim&#39;s 30-14 Division II win over the Saints. (Michael Abrams / S&S)

HEIDELBERG, Germany &#8212; Three decisive plays by the Kaiserslautern Red Raiders made the difference Saturday in a 20-16 nonconference Division I victory over the Heidelberg Lions.

With K-town trailing 10-0 with eight seconds to play in the first half, Andre Kennard intercepted a T.J. Trice pass on the Heidelberg 37-yard line. On the next play, quarterback Danny Morris found Alex Gentile for a 37-yard touchdown that sent the teams into the locker room at 10-6.

The Raiders took their first lead when Corey Peyton broke up the middle for a 99-yard TD with 2:47 left in the third quarter. Peyton rushed for 152 yards.

The Red Raiders upped their edge to 20-10 in the final quarter when Lavell Sanders cashed in a fumbled punt.

In other nonconference D-1 games Saturday:

RAMSTEIN AIR BASE, Germany &#8212; Quarterback Matt Irwin ran for 172 yards and two touchdowns and intercepted a pass to set up a third score to lead the Royals.

Chris Speer added a 20-yard TD for the Royals.

WIESBADEN, Germany &#8212; Edmond Woods, behind the lead blocking of fullback Dan Villareal, ran for 129 yards and three touchdowns as the Warrior ground game dominated the clock and the scoreboard.

Lakenheath scored all its points after halftime &#8212; a 12-yard run by Isaac Kiddell and a two-yard plunge by QB Justin King.

SHAPE, Belgium &#8212; Ryan Rice passed for four touchdowns and ran for another as the SHAPE Spartans throttled visiting Bitburg.

Rice connected with Joe Puttman for scores of 31 and 37 yards and with Bryan Farthing for an 11-yard scoring strike as SHAPE turned an early 7-0 deficit into a 21-7 halftime edge.

Rice completed his opening day by plunging in from a yard out for a fourth TD, then hooking up with Kodiak Reed for a 26-yard TD pass.

Bitburg&#8217;s TDs came on a nine-yard run by Tom Mueller in the first quarter and a 10-yard pass from Trey Wilson to David Murray in the fourth.

VILSECK, Germany &#8212; The Falcons rode a pair of interceptions by Aaron Vernon and three rushing touchdowns by Monsell Carty to a come-from-behind victory.

Carty, who rushed for 119 yards on 16 carries, scored on a 23-yard run and quarterback Anthony LeVasseur hit Steven Tracy with a five-yard scoring pass as the Falcons erased a 14-0 first-half deficit.

After a scoreless third quarter, Carty ran 28 yards for the go-ahead score, and one yard for the game-winners as Vilseck went up 28-14.

Patch took a 14-0 lead on David Kennedy&#8217;s 17-yard run and a 20-yard TD pass from J.D. Lindsay to Kennedy. The Panthers also got a 20-yard scoring toss from Lindsay to Charles Menchez.

MANNHEIM, Germany &#8212; Sophomore quarterback Alex Sokirkin passed for two touchdowns and ran for two more as the Bison pulled out a victory over the Saints.

Sokirkin, making his first start for the Bison, found Andre Proctor for a 12-yard scoring pass that made the halftime score 8-8. He opened the second-half onslaught with a two-yard TD run and followed that with a 41-yard scoring strike to Matt Brown that upped Mannheim&#8217;s edge to 22-8.

Aviano, which had scored its first-half points on a 35-yard run by Dustin Miller and a Jordan Kelsey tackle-for-loss safety, responded with a 17-yard TD pass from Kelsey to Miller.

Austin, who ran for one score, also caught a 19-yard touchdown pass from Shawn Bachtel.

The scoring pass was one of three touchdowns by Bachtel, who also found his brother, Brandon, for a three-yard score, and hit Russell Bailey for a 20-yard TD.

Giessen scored its TD in the fourth quarter, when quarterback Mike Waters ran in from four yards out.

BAMBERG, Germany &#8212; Christian Peel scored on touchdown runs of 15 and 60 yards as the Barons blanked Baumholder.

Brian Knotts was credited with 20 tackles for Bamberg.

HOHENFELS, Germany &#8212; Quarterback Kyle Macwillie broke free for a 63-yard TD run and passed 27 yards to Richard Helsham for a second touchdown for the Tigers.

Rota scored its TD on a 32-yard pass from Donte Brucchi to Steve Lilly. Mike Hall rushed for 96 yards and made 14 tackles for the Admirals.

MENWITH HILL, England &#8212; Jeremy Tibbets threw a pair of TD passes to Andrew Cusumano and a third scoring strike to Thomas Foxxy as the Bobcats rebounded from a 6-0 first-quarter deficit.

After Menwith Hill ran in a recovered fumble from five yards out for the only score of the first quarter, Foxxy scored from 25 yards out to pull the Bobcats even. Tibbets followed with a 20-yard toss to Cusumano for a 14-6 halftime lead.

Menwith Hill closed to 14-12 on Mike Bailey&#8217;s two-yard run in the third quarter, but Tibbets put the game away with a 22-yard toss to Cusumano and a 10-yard strike to Foxxy.