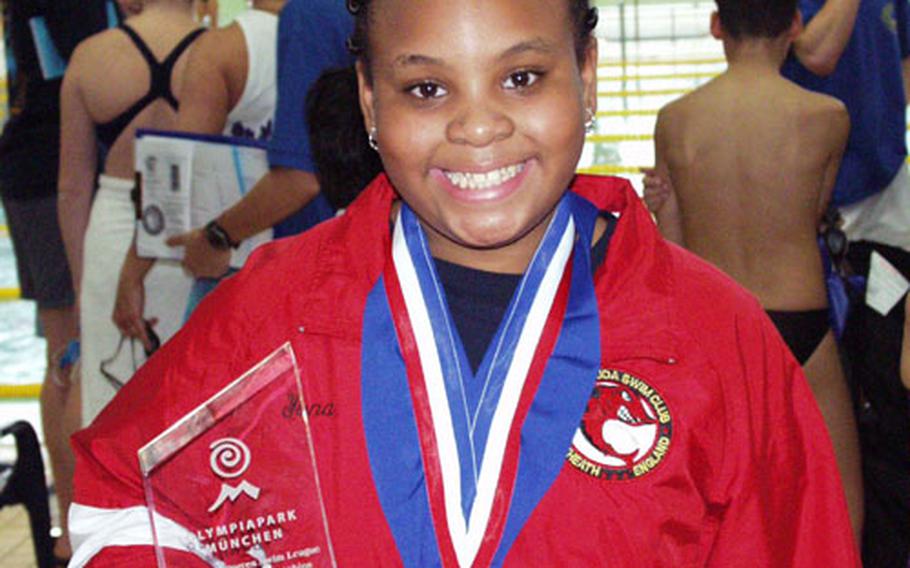 MUNICH, Germany &#8212; Some of the 580 competitors who qualified for the annual European Forces Swim League championships at the Olympic pool here on Sunday were swimming for records.

Others were swimming to fill the void left by parents whose business took them to Iraq instead of Munich.

And then there was 8-year-old Wiesbaden Wahoo Sydney Shields. She was doing both, superbly, as she broke two EFSL age-group records.

Her records came as no surprise since her qualifying times in both events, although achieved on faster short courses than the 50-meter pool used Sunday, were well under the old records.

&#8220;I&#8217;ve been swimming since I was 16 months old,&#8221; said Shields, a third-grader at Argonner Elementary School in Hanau. She loves her sport so much she watched the closing awards ceremony immersed in the pool where she also won the 50-meter freestyle in a near-record time of 39.16.

Simons, who arrived at Lakenheath eight months ago from Southern California and dreams of swimming for Stanford University, enjoyed celebrating her record feat as much as she did accomplishing it.

After all, she set her first record when she was 6, she said, so that part of the deal was old hat.

Ragan and Wood didn&#8217;t set any records, but both turned in superior performances 10 days after their fathers deployed to Iraq.

The Wood family found the EFSL long before deployment ever came about, Cathy said.

&#8220;This is just a great program,&#8221; she said, sweeping her hand toward the legions of swimmers and volunteers who did a fair job of filling the venue where Mark Spitz won seven gold medals in the 1972 Olympics.