Ramstein wrestler Peden rolls with changes on, off the mat 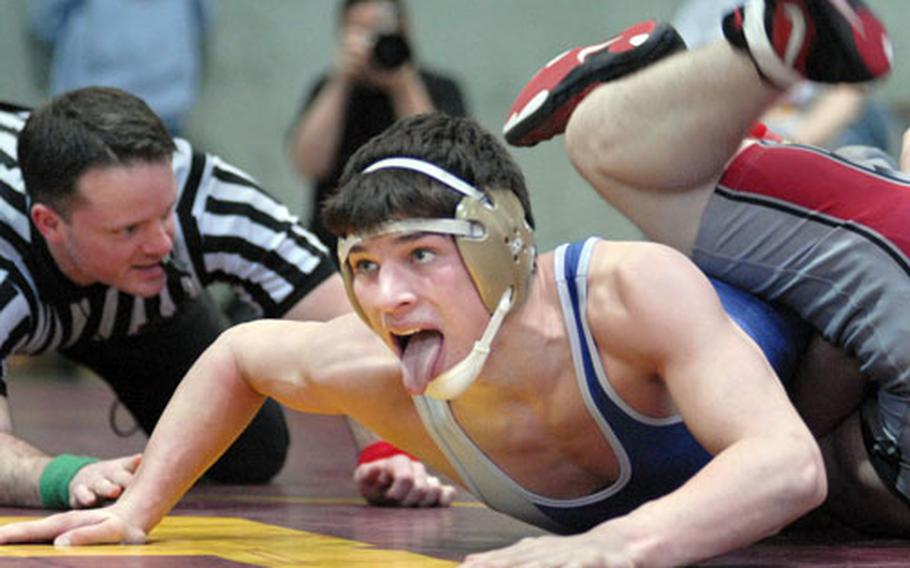 Much as he does on the mat, Ramstein wrestler Jon Peden seamlessly changed his line of attack when his family moved to Germany last year and took him off the path he had envisioned.

Different in more ways than the competition &#8212; no longer is he going against a slew of wrestlers contending for spots on Division I college wrestling teams.

All of Ramstein&#8217;s eyes were on Peden when he transferred to the school just before wrestling season began. He had spent the fall playing fullback and safety for archrival Kaiserslautern after the family moved to the area from Pennsylvania for his stepfather&#8217;s medical job. Then his mother&#8217;s desire for a bigger house landed him in Ramstein&#8217;s district.

One of the most accepting was Ramstein coach Jeff Pellaton, in his first season of guiding the Royals&#8217; wrestling team.

Pellaton said he&#8217;s working to replicate many experiences that would have benefited Peden had he remained in Allentown, Pa.

In addition, Peden wrestles for a German club in Pirmasens.

For the next week or so, however, Peden&#8217;s focus will be on the DODDS stage, to which he has adapted perfectly, Pellaton said.

&#8220;I told him that being here wouldn&#8217;t be like being in the wrestling room of a 5-A school in the States, where there would be four or five contenders for state championships,&#8221; Pellaton said[/BODY].

&#8220;He understood. Jon works very hard at being a good teammate. Everything about his presence in our wrestling room has been nothing but positive.&#8221;

Peden even found a positive in his much-smaller pond.

Peden, who says he began wrestling at age 4, is 18-0 this season, with all victories coming via falls or technical falls.

For his next notch, Peden has contacted Nebraska of Division I, and Division II powers Wartburg, Iowa, and Ursinus, Pa. In the meantime, he has some work to do &#8212; over and above any possible DODDS-Europe, national or international championships.