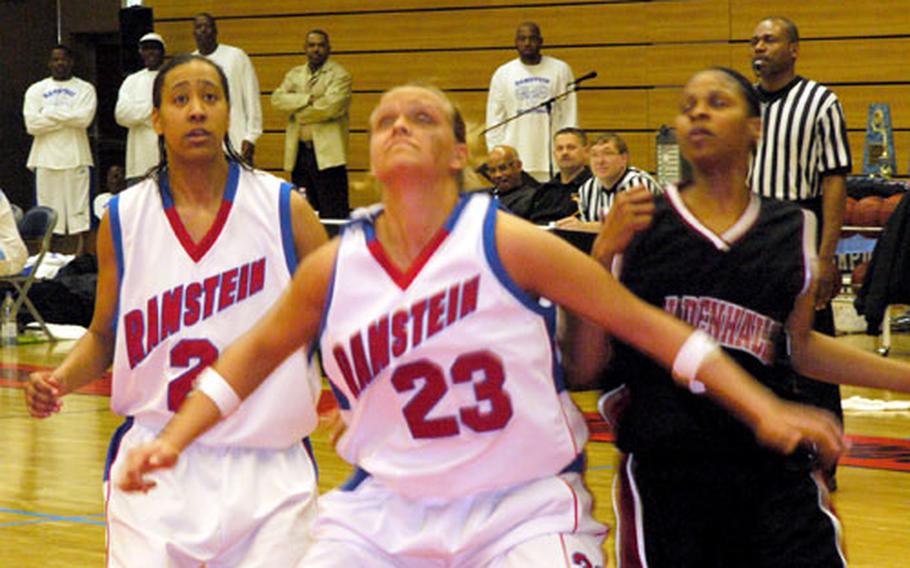 SPANGDAHLEM AIR BASE, Germany &#8212; The Ramstein Lady Rams withstood a second-half comeback Friday by defending champion Mildenhall to claim a 63-55 victory in the USAFE championship game.

Trailing 35-25 at halftime, the Lady Marauders sank three straight three-pointers, two of them by Bree Griffiths, to cut the lead to 49-47 with 6:10 to play. Two free throws by Ebony Morris 22 seconds later tied it 49-49.

The game plan, he said, was to play vicious defense and get the ball inside to all-tournament pivot Jennifer Brooks. Brooks dominated inside all day, scoring 23 points &#8212; 13 in the first half &#8212; and pulling down 23 rebounds.

The effort paid dividends on the defensive end, where Ramstein held Mildenhall without a point for the next 4:35 before the Marauders finally broke through with 42 seconds remaining.

On the other end, Ramstein&#8217;s other all-tournament players, Ashonda Williams, Brandi Jones and Patricia Phillips, were taking care of the scoring. Williams, who finished with 19 points and blocked three shots, scored five points during the span; Phillips added three, Jones two and Brooks four.

Ramstein and Mildenhall will take on Army champion Wiesbaden and runner-up Kitzingen in round-robin play Thursday and Friday, then all four teams will be re-seeded for Saturday and Sunday&#8217;s double-elimination playoffs for the U.S. Forces-Europe crown.