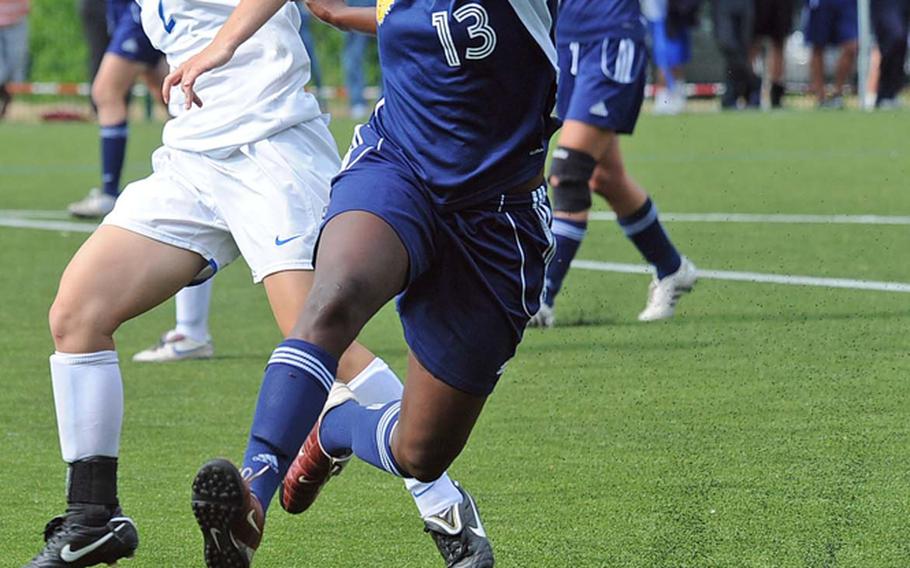 Buy Photo
Ramstein's Josie Seebeck, left, and Heidelberg's Ashley Ross get tangled up fighting for a ball in a Division I girls soccer semifinal won by Ramstein, 5-0. (Michael Abrams/Stars and Stripes)

Buy Photo
Ramstein's Josie Seebeck, left, and Heidelberg's Ashley Ross get tangled up fighting for a ball in a Division I girls soccer semifinal won by Ramstein, 5-0. (Michael Abrams/Stars and Stripes) 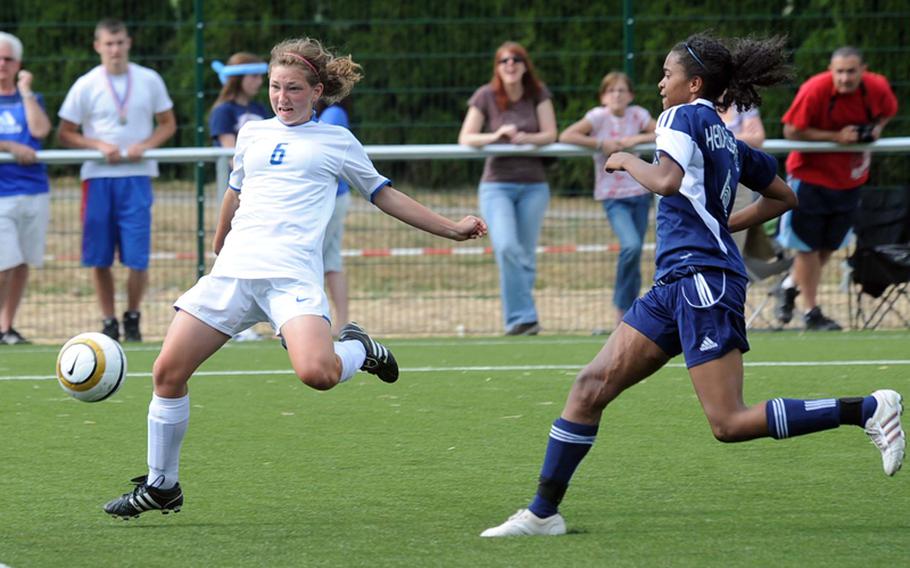 Buy Photo
After slipping past Heidelberg's Taylor Morgan, right, Ramstein's Kaleen Carter times a volley shot on a cross from a teammate. Ramstein beat Heidelberg, 5-0, to advance to Saturday's Division I final. (Michael Abrams/Stars and Stripes) 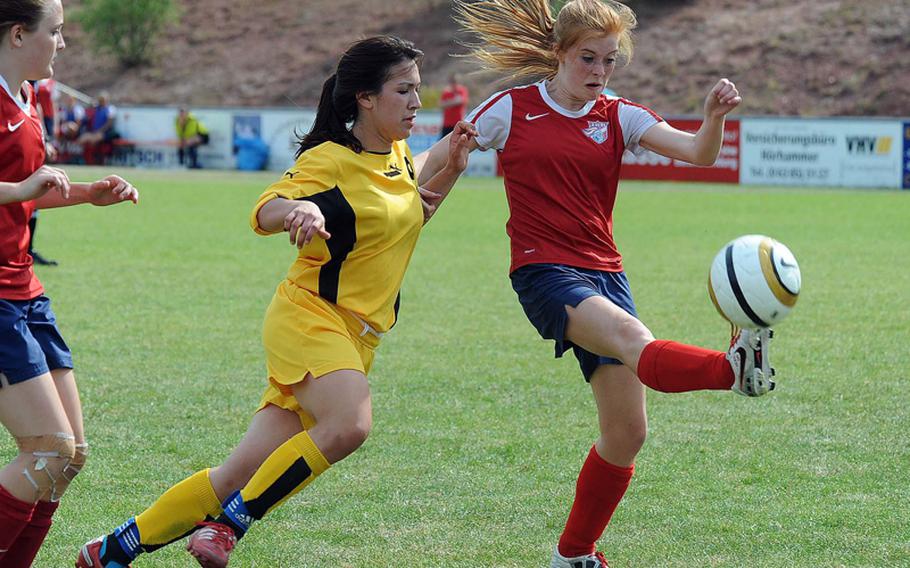 REICHEBACH-STEEGEN, Germany &mdash; Defending European Division I girls champion Patch took the long way around Friday to earn its errth in the 2011 championship game, fending off the International School of Brussels, 5-3, in overtime.

&ldquo;I was pretty confident,&rdquo; All-European Emma Murray, who scored two goals against ISB, said about her mind-set going into extra time. &ldquo;I knew that once we got our focus back, we&rsquo;d be all right.&rdquo;

Focus might have been the problem late in regulation during Friday&rsquo;s game. Patch, on the strength of two goals by Carissa Carlson and Murray&rsquo;s first strike, was leading 3-1 in the waning minutes when the normally disciplined Lady Panthers surrendered two penalty kicks.

Jennifer Marten converted the first one for her second goal of the game; Gabriela Macusdottir banged home the second just before the final whistle. It was a shocking end to a period which had seen ISB have but one real chance at scoring.

Patch wasted little time taking charge in the extra 10 minutes. All-European Elysia Verones, whose foul on Marten led to the game-tying PK, atoned with the go-ahead goal on Patch&rsquo;s first possession of OT; Murray added an insurance goal three minutes before the end.

Patch, which was playing without injured All-Europe goalkeeper Ellie Welton, will have to duplicate that kind of effort Saturday, when it is scheduled to take on top-seeded Ramstein in the 5 p.m. D-I championship game on the Lady Royals&rsquo; home field.

Ramstein throttled No. 2-seeded Heidelberg, 5-0, in Friday&rsquo;s other D-I semifinal.

Josie Seebeck did the heavy lifting for the unbeaten Lady Royals. She scored three goals and assisted on a fourth, as well as providing leadership, according to Ramstein coach Ricardo Buitrago.

&ldquo;She was calm and collected throughout,&rdquo; Buitrago said about his keeper.

Murray said she&rsquo;s delighted to be defending Patch&rsquo;s title against top-seeded Ramstein, adding that Patch, which traditionally unveils all-new uniforms in title games, once again will be dressed for the occasion. &ldquo;We&rsquo;ll be wearing our &lsquo;prom dresses,&rsquo; &rdquo; she said.