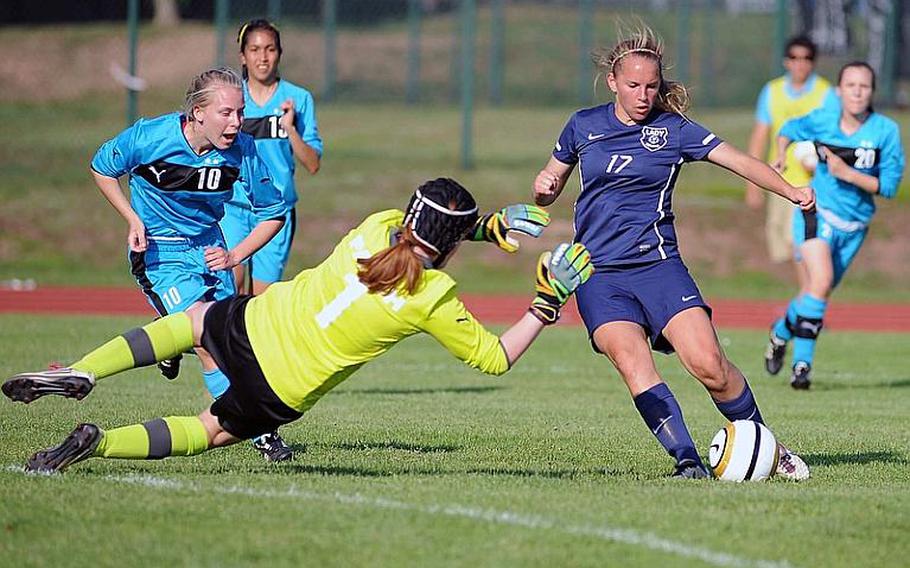 Ramstein's Shannon Guffey is on her way to scoring the game-deciding goal against Patch keeper Ellie Welton in the Division I title match at the DODDS-Europe soccer championships. At left is Tori Gilster. (Michael Abrams/Stars and Stripes)

Ramstein's Shannon Guffey is on her way to scoring the game-deciding goal against Patch keeper Ellie Welton in the Division I title match at the DODDS-Europe soccer championships. At left is Tori Gilster. (Michael Abrams/Stars and Stripes) 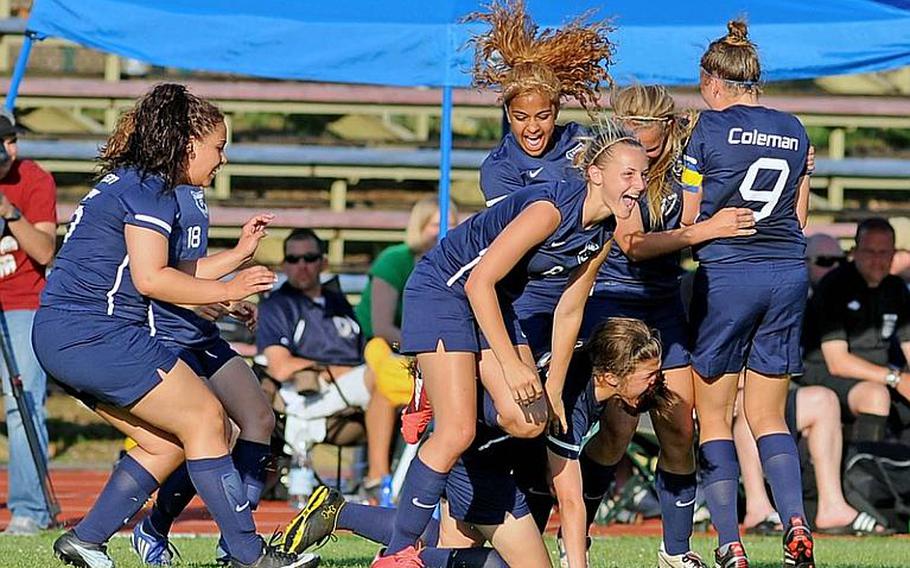 The Ramstein Royals celebrate their Division I title after beating defending champion Patch 1-0 in a rematch of last year's final at the DODDS-Europe soccer championships. (Michael Abrams/Stars and Stripes) 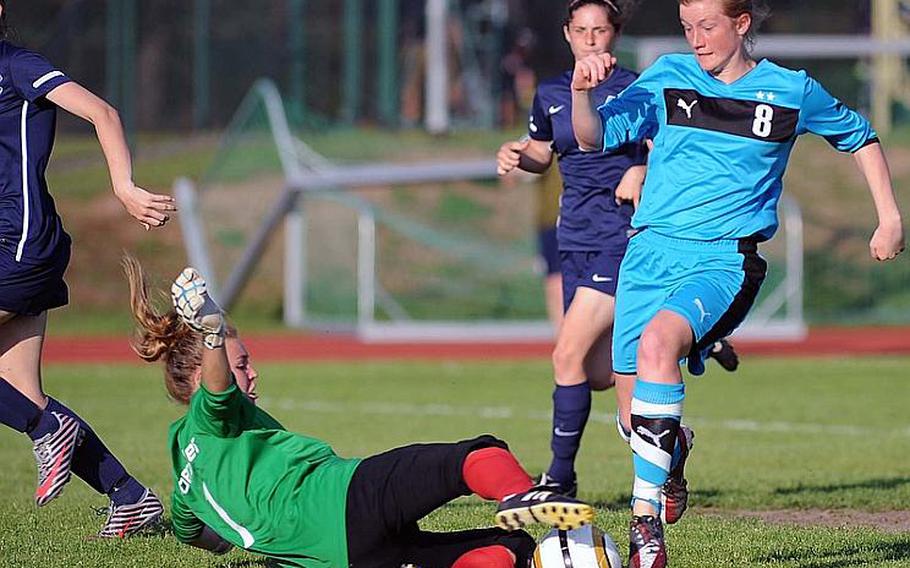 Ramstein keeper Terri Leigh Obermiller stops Patch's Lauren Rittenhouse in the Division I final at the DODDS-Europe soccer championships. Obermiller and her teammates shut out the defending champs, beating the Panthers 1-0. (Michael Abrams/Stars and Stripes)

&ldquo;There was a miscommunication between the goalie and a defender,&rdquo; Guffey said as her team celebrated happily with their home-field fans, &ldquo;and I was able to capitalize.&rdquo;

Guffey&rsquo;s goal, which she put to the left of diving Patch keeper Ellie Welton, would eventually put an end to the Patch girls&rsquo; two-year reign atop Division I.

&ldquo;Eventually,&rdquo; however, would require a maximum effort by the Ramstein defense and goalkeeper Terri-Leigh Obermiller, and that&rsquo;s exactly what the Royals came up with.

Royals&rsquo; coach Ricardo Buitrago anchored Thursday&rsquo;s defense by pairing 2011 Stars and Stripes player of the year Josie Seebeck, ordinarily an attacking midfielder, alongside her sister, Kat, a freshman, as defensive midfielders this time around.

&ldquo;We played Josie at stopper against K-town,&rdquo; Buitrago said about Ramstein&rsquo;s 1-0 victory over Kaiserslautern on May 12, &ldquo;and it worked really well. Before we even told them today, they knew they&rsquo;d be back there again.&rdquo;

That&rsquo;s because Josie Seebeck, the senior who&rsquo;s bound for Central Michigan University on a soccer scholarship, understood what was at stake on Thursday.

&ldquo;Patch is a great team,&rdquo; she said. &ldquo;Once we got the goal, we knew we had to try to contain them. We thought we&rsquo;d change things up. Kat and I worked well together before, so they left us back there.&rdquo;

The strategy clicked, which came as no surprise to Ramstein senior Mackenzie Crews, who moved up to the central midfield when the elder Seebeck took over at Crews&rsquo; usual stopper position.

Buitrago liked what he saw, too.

&ldquo;They did a great job,&rdquo; he said. &ldquo;They truncated every attack Patch made.&rdquo;

Patch came close to stopping every attack as well.

&ldquo;We were lucky on our goal,&rdquo; Buitrago said. &ldquo;It was an opportunity we didn&rsquo;t throw away.&rdquo;

Crews, who endured last May&rsquo;s 2-1 title-game loss to Patch, was predictably thrilled with her team&rsquo;s performance.

The title completed Ramstein&rsquo;s 11-0 season in the most decisive way possible. In their four tournament games, the Royals compiled an aggregate score of 16-1. The lone goal came in a 4-1 semifinal win over Kaiserslautern.

CorrectionRamstein's aggregate goals allowed total was incorrect in an earlier version of this article.