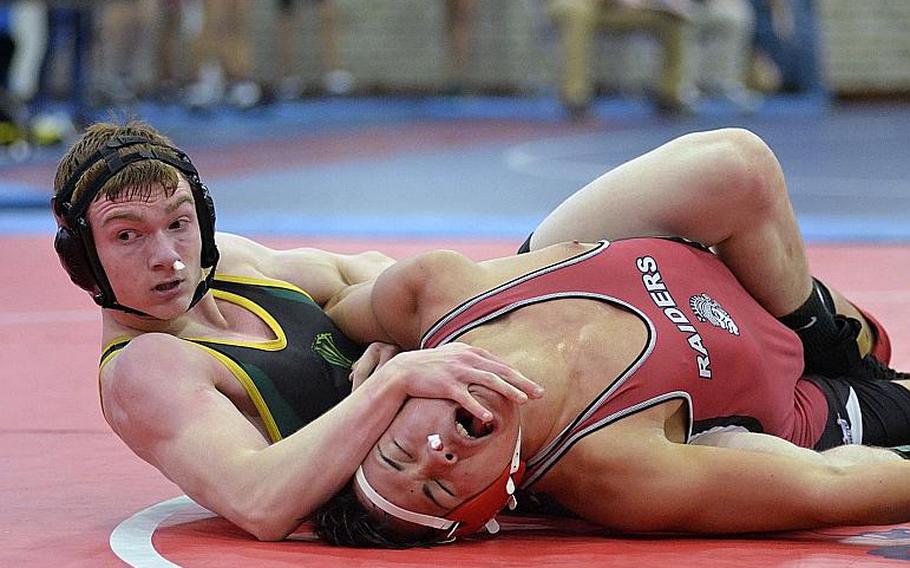 The Ramstein Royals have a slight head start in the race for the 2019 DODEA-Europe Division I wrestling team championship.

Ramstein saw 28 of its wrestlers included in the final brackets for the two-day European championship meet when DODEA-Europe released the field this week, while the five-time defending champion Stuttgart Panthers checked in with 22.

That’s no guarantee that the Royals will end the Panthers’ dynasty, of course. Only one wrestler per school can be designated a points-earner in each of the tournament’s 14 weight classes, though a school’s secondary wrestlers can contribute by finishing ahead of other teams’ entries and denying those schools points.

Stuttgart’s hopes of extending its title reign start with its core of three 2018 European champions. Sean Smith is the favorite at 145 pounds after claiming gold at 126 pounds a year ago, while John Carroll is the odds-on favorite to repeat in the heavyweight 285-pound class.

Stuttgart senior Benjamin Fielding, meanwhile, is looking to complete one of the most accomplished careers in DODEA-Europe wrestling history. A first-place finish at 138 pounds this weekend would give him his fourth straight European title across four different weight classes, while an unbeaten showing over the two days will round out an undefeated DODEA-Europe career.

Ramstein has two reigning champions on its roster in Andres Hart, who will vie for a second straight title at 106 pounds, and Conner Mackie, who won at 120 pounds for Kaiserslautern last season and will look to secure the 126-pound crown for the Royals this year.

Event host Wiesbaden has 14 wrestlers in the tournament, including Atreyu Allen, who won at 113 pounds last year and is now a contender at 126.

Rota has the edge in the Division II race with eight wrestlers, while Sigonella holds the clear edge in Division III with six entries. Munich, last year’s small-school champion, won’t be represented this year.

The event starts Friday with four preliminary rounds. Saturday’s schedule includes a final preliminary round, followed by a semifinal round, fifth- and third-place matches and a slate of European championship bouts across 14 weight classes.