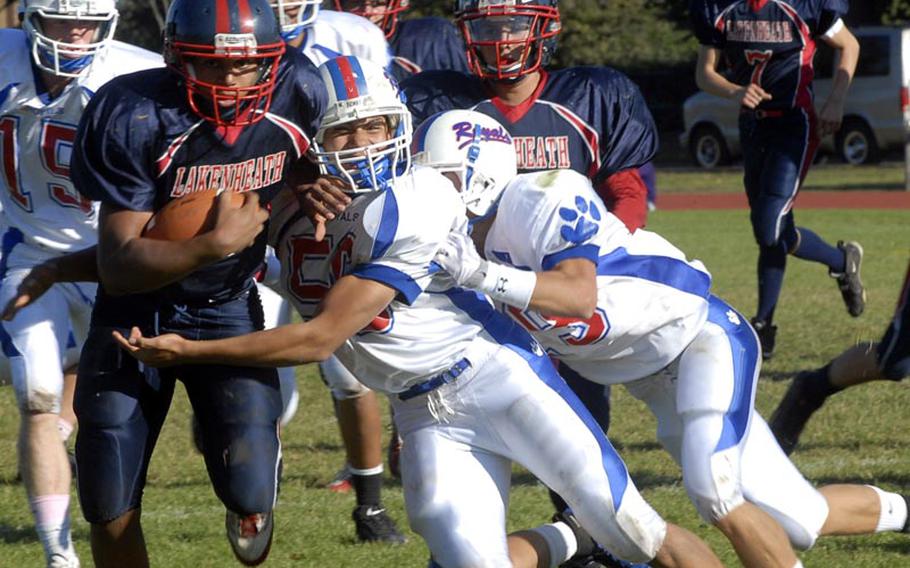 Ramstein's Jaap Van Gaalen catches a touchdown pass in a 13-3 victory over the Lakenheath Lancers Saturday in England. Van Gaalen had six carries for 61 yards to go along with his one reception and also had an interception on defense. (David Hodge/Stars and Stripes) 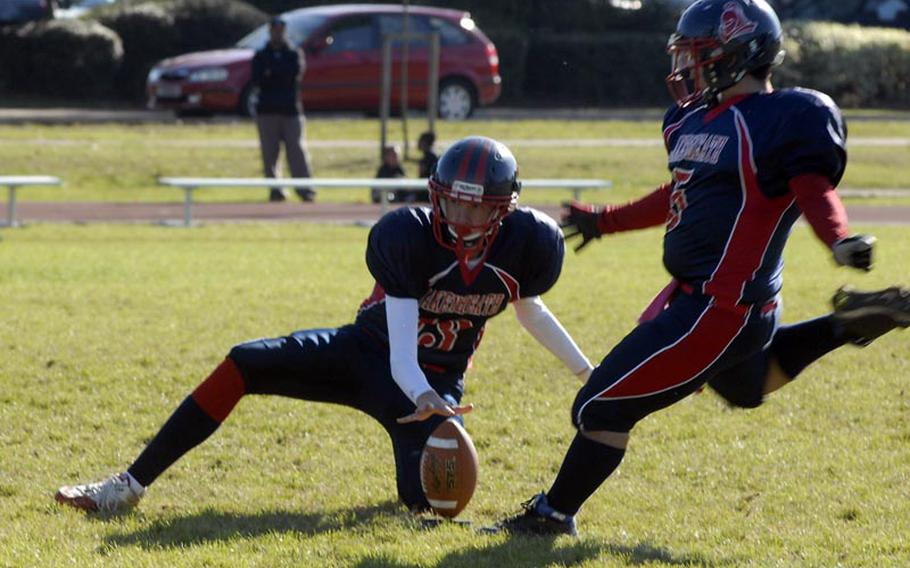 Lakenheath's Adam Garcia boots a field goal against Ramstein on Saturday. The kick, which was from 40 yards, accounted for the Lancers only points in a 13-3 loss to the Royals. (David Hodge/Stars and Stripes) 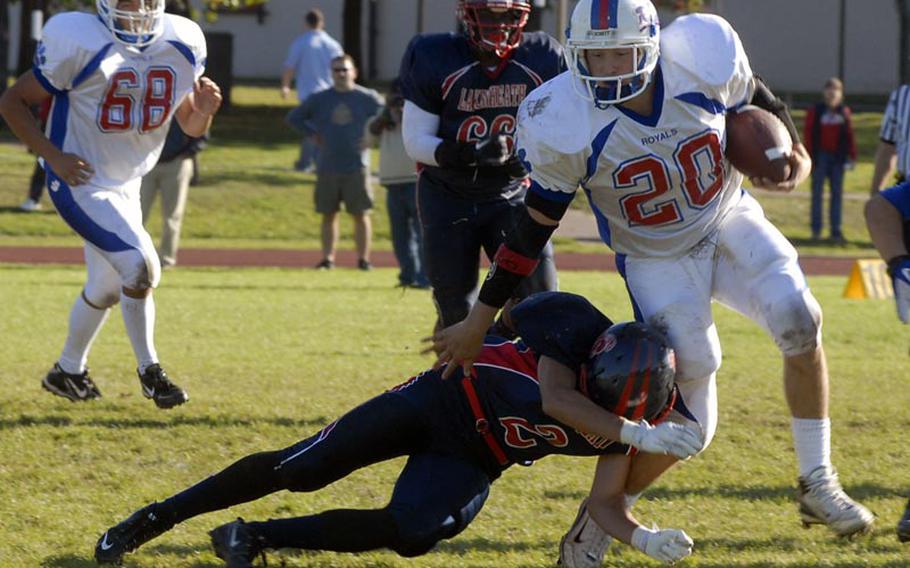 Ramstein tailback John Groteleuschen tries unsuccessfully to avoid a tackle from Lakenheath's Nick Ruiz Saturday in England. Groteleuschen had 25 carries for 86 yards and a touchdown against the Lancers in a 13-3 victory. (David Hodge/Stars and Stripes)

RAF MILDENHALL, England &mdash; Visiting Ramstein earned a hard-fought 13-3 victory Saturday over the host Lancers to stay tied atop the Division I standings with only a game left in the regular season.

From the opening kickoff the momentum seemed to favor the home team as Royal Justin Pendergrass fumbled the ball and Lakenheath recovered. The two teams traded punts before Lancer senior Adam Garcia booted a 40-yard field goal that bounced off the upright and then the crossbar before falling through.

The Royals capitalized on a fumbled punt snap and recovered the ball at the Lancers&rsquo; 10-yard line. Three plays later, senior Jon Groteleuschen punched it in on the ground. Groteleuschen had 25 carries for 86 yards in the contest.

The Lancers again caught a break after getting pushed back to punt out of their own end zone when Ramstein fumbled the return. But two plays later a Garcia fumble handed the ball right back to the Royals. A nice offensive series by Ramstein set up a touchdown toss to senior Jaap Van Gaalen to make it 13-3. Van Gaalen carried the ball six times for 61 yards.

Lakenheath seemed to answer immediately, putting together a sustained offensive drive led by tough running junior Xavier Thompson down to the opponents&rsquo; 15 yard line with just over a minute left in the first half. But, the Lancers were held scoreless when Garcia&rsquo;s field goal attempt was blocked. Thompson, returning after missing a game with an injured shoulder, finished the day with 18 carries for 70 yards.

The third quarter and half of the fourth quarter was a battle of defenses and field position. For Ramstein, senior Justin Dickey finished with nine tackles and two sacks and Lakenheath&rsquo;s Ian Hudak and Stevie Stephens finished with 6.5 tackles with a sack and 7.5 tackles, respectively.

With just under five minutes remaining in the game and Lakenheath trying to hold on defense, a costly offside penalty gave the Royals a fresh set of downs and a chance to burn off another minute-and-a-half off the game clock.

On the Lancers&rsquo; ensuing drive, Van Gaalen sealed the victory with a diving interception of a ball thrown by Lancer quarterback Devon Parrish.

Ramstein coach Carlos Amponin commended Lakenheath&rsquo;s defense after the game by saying the Lancers were the first team to hold Groteleuschen to under 100 yards rushing.

&ldquo;It&rsquo;s no secret what we do,&rdquo; Amponin said, adding that Lakenheath came prepared to stop Groteleuschen, listed on the roster at 6-feet 2-inches and 210 pounds.

Ramstein will entertain the Filton Pride next weekend. A win ensures the Royals of at least a share of the division title and a home playoff game, Ramstein might still qualify for the playoffs with a loss. Lakenheath, eliminated from playoff contention, travels to face Weisbaden with the intent of spoiling the Warriors&rsquo; playoff hopes.