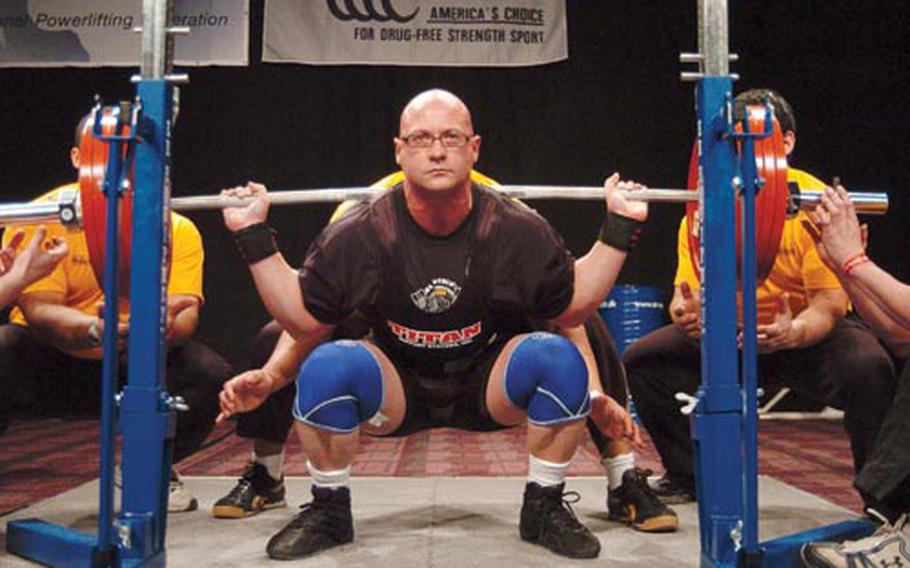 RAMSTEIN AIR BASE, Germany &#8212; Fresh from winning his fifth national powerlifting title of 2009, Troy Saunders, 40, says he has no intention of tapering off.

I have a lot left," Saunders, who claimed four championships last month at the USA Powerlifting Military National championships at Killeen, Texas, said in a recent telephone interview. "If I can go over 700 pounds in the deadlift, there&#8217;ll be a lot of records available to me.

Saunders, who generally competes as a "RAW" lifter &#8212; a contestant who eschews lifting suits, knee wraps and drugs &#8212; lifted a total of 1,609 pounds: bench of 391, squat of 568 and deadlift of 650. The total propelled the 220-pounder to the 2009 military national championships in the open and masters (over-40) age groups in both the RAW and conventional categories.

Saunders, however, points to the Arnold Sports Festival RAW masters championship he won a week earlier in Columbus, Ohio, as an even bigger achievement.

You have to be invited to the Arnold," Saunders said. "They invite national champions from countries all over the world &#8212; South America, Europe &#8212; and as a national champion (U.S. National Masters champion 2008), I was invited.

Saunders won the 220-pound RAW masters category at the event, and placed second overall in the masters division. He also took second in his weight class in the open RAW category.

The Arnolds were really competitive," he said.

When the inevitable question about steroids came up, Saunders said timing and his job status removed any temptation to juice.

When I started, back in the &#8217;70s and &#8217;80s, the country was in big denial about whether or not steroids did any good, he said. Coaches would tell you that steroids didn&#8217;t make any difference. By the time steroids became common, I was in the military, so drugs were out of the question.

In addition to the satisfaction of reaching the top without the use of chemicals, Saunders&#8217; drug-free status makes him a role model.

I teach powerlifting and hold bodybuilding seminars, he said. My longevity and success without drugs is a big motivator.

According to lifter Jeremiah Celis, Saunders is more than willing to share his experience.

[W]e&#8217;ve been in contact with him for a few months now," Celis wrote last week in an e-mail from the Azores, where he is based. "He was especially helpful at Military Nationals. His expertise and small pointers on technique and things to try were very, very helpful.

I would say even though we don&#8217;t get to train with him, just being able to see what he can do without any supportive gear is amazing.&#8230;

Saunders had planned to captain the USAFE team Saturday at the U.S. Forces Europe championships, but that event was scrubbed last Friday for lack of participation.

He said he&#8217;ll be deploying this spring, but doesn&#8217;t see a stint in the desert as an impediment to future triumphs.

You can always train, said the lifter who lays claim to six national records and nine military marks. I&#8217;ll keep doing this until something breaks.