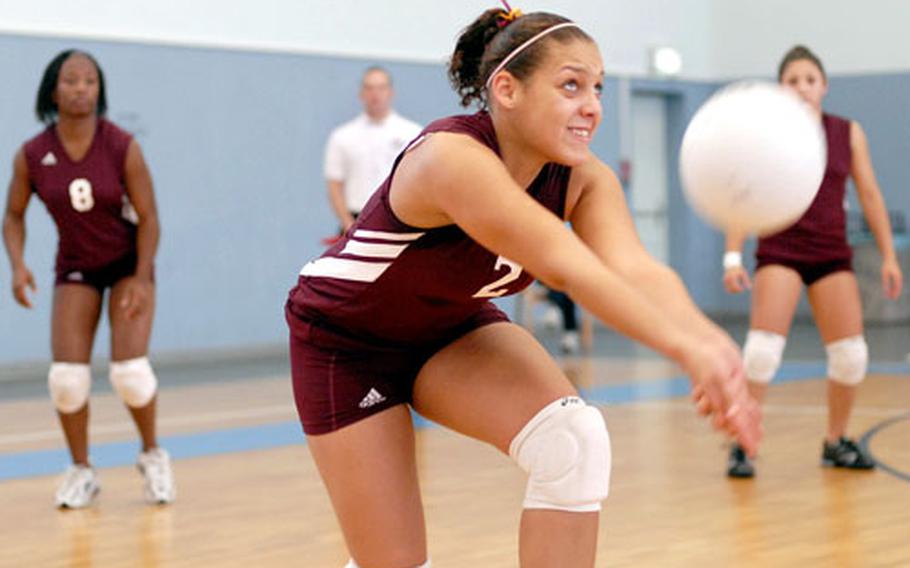 Ramstein was the lone defending champion to repeat, downing Heidelberg in Division I. Vilseck swept aside Naples in D-II while Rota, last year&#8217;s D-III runner-up, won it all this year by beating Hohenfels. And Brussels proved it deserved Division IV top seed by beating Milan.

The title was especially sweet because Brussels lost to Milan in tournament pool play Thursday. In fact, it was swept in the best-of-three match.

Lizz McVicker, the Brussels captain, said the team thought it might face Milan in the final and used the loss to spur it on.

After dropping the first two games, Milan stormed back to win the third. The fourth set started well for Milan, which jumped out to a 7-4 lead, but the lead evaporated as the game went on.

The Lady Admirals worked their way back into the game and managed to sneak away with it.

The teams then split a pair of close games, and game four looked to be headed that way until Abbi Shapiro Kinghorn stepped up to serve.

Behind Kinghorn&#8217;s serves and Bethany Walcott&#8217;s spikes, Rota jumped out to a comfortable lead and never looked back.

Scarbrough said her team hones its skills during the regular season by playing outside of DODDS &#8212; mostly against against Spanish clubs.

After a close first game, Vilseck came out strong and dominated the second and third games with relative ease. Vilseck had knocked off top-seeded Aviano in the semifinals and had too much power for sixth-seeded Naples.

Leading the way was Alania McKinnis, who unleashed an arsenal of hard shots that were nearly impossible to return.

McKinnis, a senior, said she and her teammates are extraordinarily close, spending a lot of time together away from volleyball. They watch movies, hold sleepovers and talk about everything on and off the court.

With the tournament in Ramstein&#8217;s neighborhood, the Vogelweh stands were packed with raucous Royal loyals for the final match of the day. Heidelberg was also well represented.

The games are good, too. Heidelberg grabbed the first one on the strength of team play led by senior Courtney Buchwald.

But from the second game on, it was evident Ramstein was out to make a statement: Heidelberg wasn&#8217;t about to walk away with the hardware without a fight.

Ramstein dominated the next two games. Ramstein senior Kaylen Bannister attributed the momentum swing to her teammates&#8217; ability to move off the back line and set her and others up front.

The Lady Lions kept the final game close, but eventually fell. It was the second time in the tournament that Ramstein beat Heidelberg after losing the first game.