Ramstein reclaims roost on the diamond 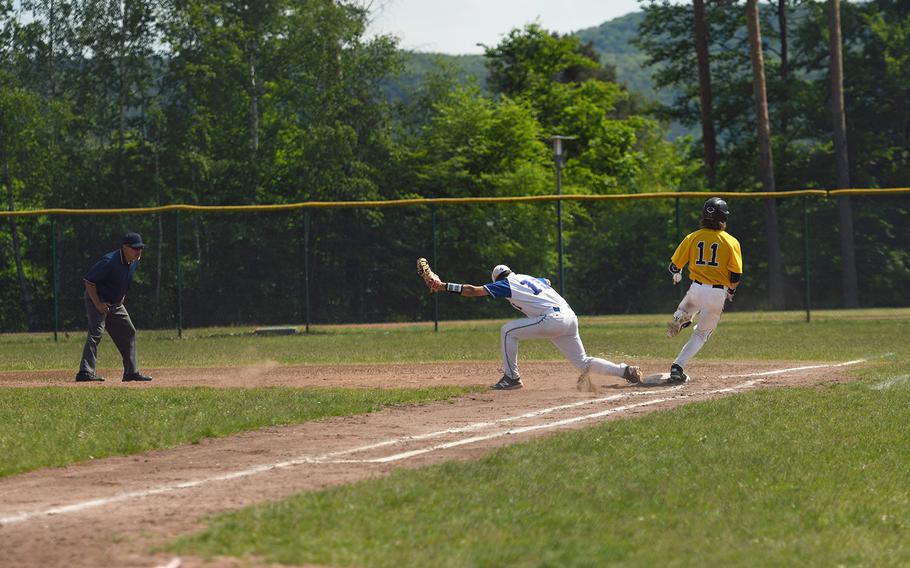 Buy Photo
Stuttgart's Peter Buxkemper touches the base as Ramstein's Calvin Delp squeezes the ball in a close play at first in the championship game of the DODEA-Europe Division I championship game on Saturday, May 25, 2019. (Chad Garland/Stars and Stripes)

Buy Photo
Stuttgart's Peter Buxkemper touches the base as Ramstein's Calvin Delp squeezes the ball in a close play at first in the championship game of the DODEA-Europe Division I championship game on Saturday, May 25, 2019. (Chad Garland/Stars and Stripes) 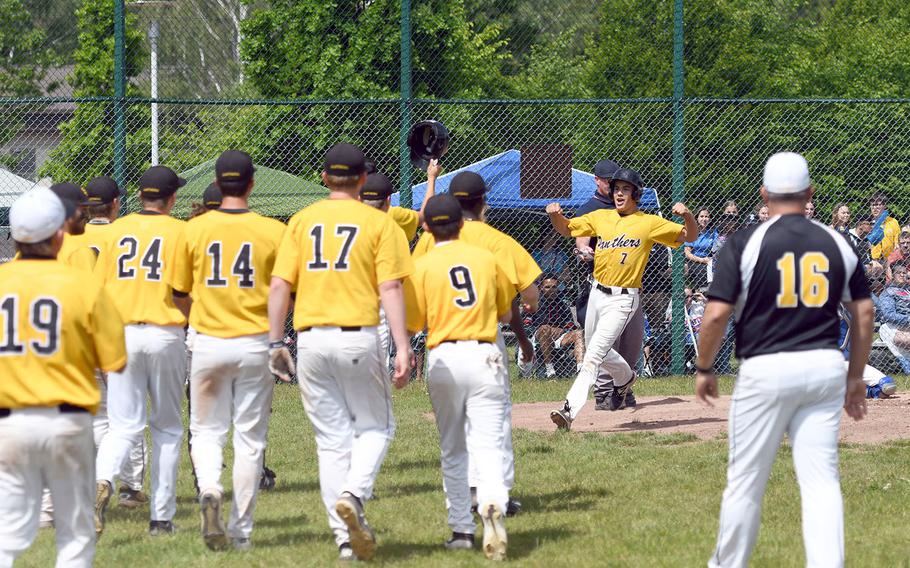 Buy Photo
Stuttgart celebrates a home run by Tyler Savage in the championship game of the DODEA-Europe Division I baseball championships on Saturday, May 25, 2019. Ramstein won the game 5-4. (Chad Garland/Stars and Stripes) 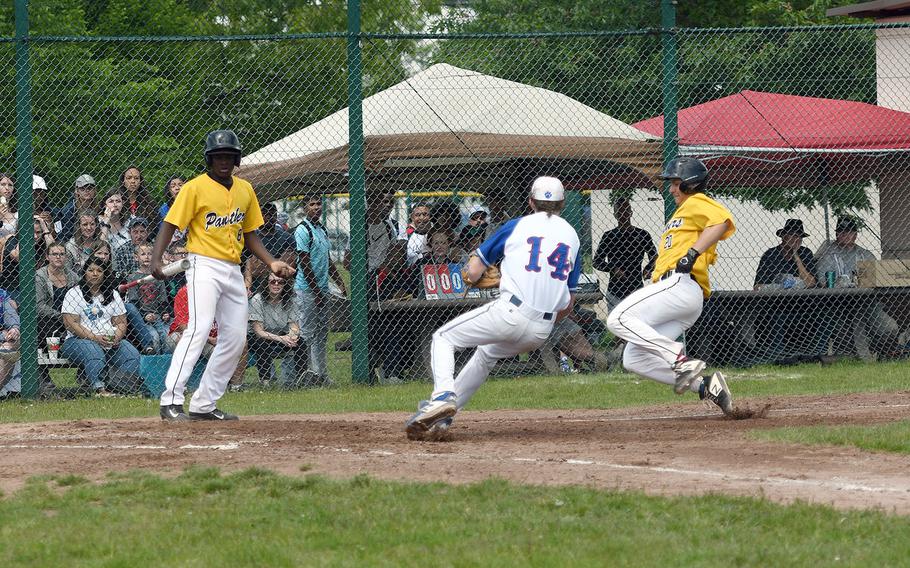 Buy Photo
Stuttgart's Wesley Coglianese heads for home, while Ramstein's Tieran Shoffner blocks the way in the Royals' 5-4 victory in the championship game of the DODEA-Europe Divsion I championship on Saturday, May 25, 2019. (Chad Garland/Stars and Stripes) 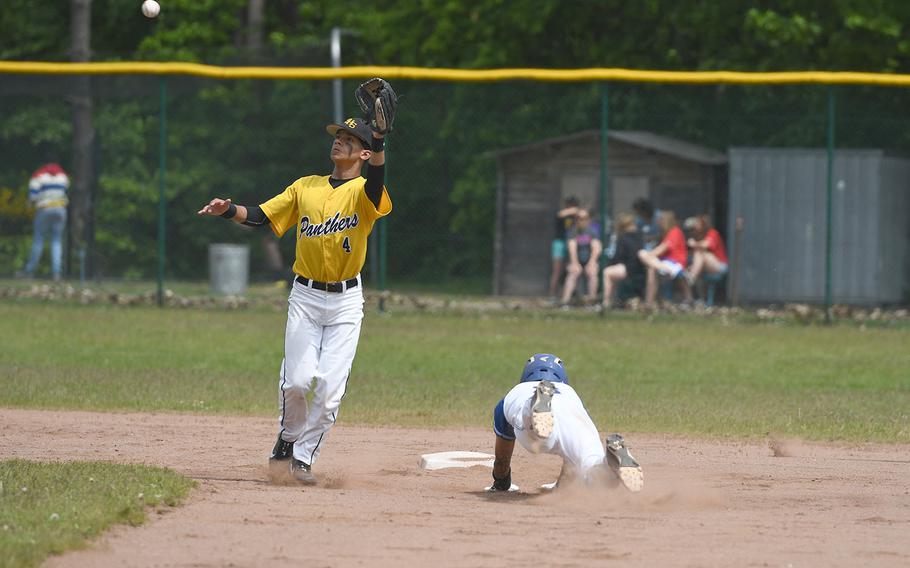 Buy Photo
Stuttgart's Carlos Mercado waits for the throw at second base in the Panthers' 5-4 loss to Ramstein in the DODEA-Europe Division I championship game on Saturday, May 25, 2019. (Chad Garland/Stars and Stripes)

RAMSTEIN AIR BASE, Germany -- Ramstein baseball is royal once again.

The Ramstein Royals edged the Stuttgart Panthers 5-4 Saturday at Ramstein Southside Fitness Center, reclaiming the DODEA-Europe Division I championship a year after their half-decade dynasty ended.

“Our team is made of diamonds, iron and gold,” Ramstein coach Osvaldo Garcia Carrillo said. “These guys are highly, highly intense. They never give up.”

Miles Murphy was the Royals’ all-around hero in the decisive sixth inning. On the mound, Murphy held the Panthers scoreless in the top of the frame to maintain a 4-4 tie. In the batter’s box, Murphy delivered the walk-off, two-out single that won the Royals the game and the title.

After blanking Stuttgart to start the final inning, Murphy had little doubt that his team would produce the needed rally to finish it.

“I felt very confident in my team,” Murphy said. “We’ve been able to collect multiple hits, and then eventually lead to a run.”

Ramstein has made a habit of winning such games this spring, starting with the two one-run victories it earned over Stuttgart in the opening weekend of the regular season and continuing with a remarkable comeback win over Wiesbaden in Friday’s semifinal round. Murphy has come to appreciate the stressful experience.

“It’s not as much fun when you just blow out a team,” Murphy said. “It’s definitely way more fun when it’s a close game, you’re going back and forth.”

The game was going mostly in Stuttgart’s favor early. The Panthers built a three-run lead over their first four trips to the plate, highlighted by a home run over the centerfield fence by Tyler Savage. But the Royals were undeterred, pulling ahead in the bottom of the third with a makeshift rally helped by some Panther miscues in the field. A tying Stuttgart run in the top of the fifth set the stage for the tense sixth inning.

“We’re always in the game until the last out. That’s how we play,” Garcia said. “We play the game right.”

The dramatic victory was an ideal sendoff for seniors Jerod Junkins, Nathan Kranz and Tieran Shoffner, members of Ramstein’s stalled dynasty who vowed to restore that reign before they moved on. They accomplished that goal with capable support from the younger Royals who will carry the program forward in their absence.

“I’m really proud of everyone on the team, one through 16,” Kranz said. ““We’re always confident, we’re never down.”

The game was a renewal of the DODEA-Europe sport’s signature rivalry, the first time since 2014 the two programs have met in the Division I final.

Stuttgart, previously known as Patch, and Ramstein dominated the formative years of European baseball. The Panthers and Royals combined to claim every Division I championship until 2018, in the process constructing one of DODEA-Europe’s fiercest rivalries in any sport.

But that dynamic was disrupted in recent seasons. Ramstein seized full control of Division I, launching a half-decade streak of European titles as Stuttgart receded into the pack of challengers a tier below. Then the Royals’ iron grip was unclenched when Lakenheath ousted them in the 2018 semifinals.

Last year’s ensuing title game, a 9-6 Lakenheath victory over Kaiserslautern, was the first Division I title game to include neither Ramstein or Stuttgart and produced the first champion other than the Panthers or Royals.

The possibility of a new era of Ramstein-Stuttgart supremacy was raised on the opening weekend of the spring regular season, when the Royals claimed narrow 1-0 and 5-4 wins over the Panthers in a sweep that nevertheless left both teams positioned on the short list of likely potential champions.

While the Panthers fell short of their first championship since 2012, first-year Panthers coach Rob Loyd praised his team for a memorable season.

“These boys have done everything they could possibly do to get here,” Loyd said. “They’ve got more heart than any team I’ve ever been around.”