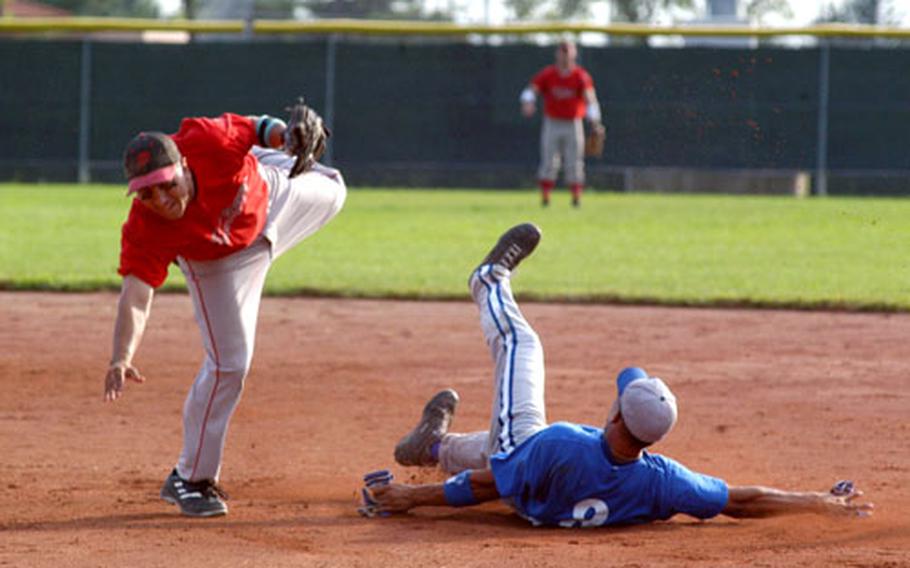 Ramstein catcher Sal Vieyra, right, breaks up a double play Saturday by forcing Kaiserslautern second baseman Jeramy Alponte off the bag and into the air. Alponte got the throw off, but not in time to get another out at first. Ramstein went on to win the game 32-12. (Kent Harris / S&S)

AVIANO AIR BASE, Italy &#8212; The Ramstein men&#8217;s softball team let one championship slip last week. But the Rams weren&#8217;t about to let another one get away.

Ramstein jumped to an 18-0 lead against Kaiserslautern in the final game of the Army-Air Force Final Four tournament. Unlike the 12-10 loss earlier in the week to Spangdahlem in the U.S. Air Forces tournament, the Rams never let up.

The Rams did that by getting on base time and time again. Two Ramstein players had two hits. Two others had three hits. Five more had four hits apiece. Snyder, the team&#8217;s pitcher, finished with five.

Ramstein forced a final game by defeating Kaiserslautern 18-6 earlier in the day. Kris Auger had three home runs and Chris Barks had two homers and two more hits in that game.

Those two and the rest of the Rams carried that over in the final game.

Kaiserslautern came back with three of its own in the bottom of the inning, with Quinton Floyd and Vince Williams both homering.

But it got even worse for Kaiserslautern in the Ramstein second, with 15 batters coming to the plate. Barks hit a three-run homer, Flammang had a two-run shot, Auger added a solo blast and Noll doubled in two more runs.

Jones said his team had nothing to feel sorry about.