Ramstein hurdler hopes to alter the record books before he leaves Ramstein hurdler Jacob Palmer has set his sights on DODDS-Europe records in the 110-meter and 300-meter events. (Rusty Bryan / S&S)

Ramstein hurdler Jacob Palmer has set his sights on DODDS-Europe records in the 110-meter and 300-meter events. (Rusty Bryan / S&S) 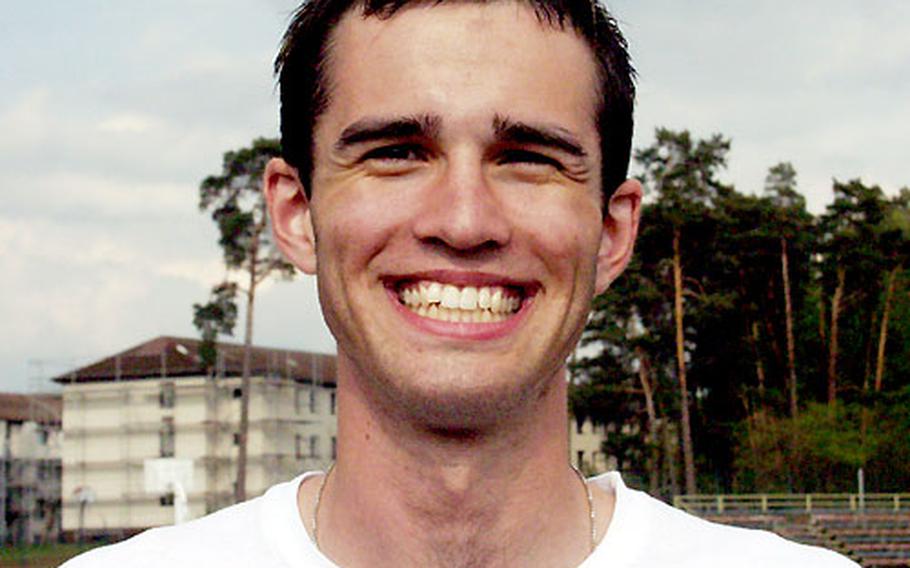 &#8220;It would be extremely satisfying if I could break those records and take that with me to college,&#8221; Palmer said Tuesday as the Royals worked out leftover stiffness from 13-hour bus rides to and from Alconbury, England, last weekend.

What happened at Alconbury prompted track officials to reach for the record books. Palmer ran a hand-timed 14.8 seconds in the 110, four-tenths of a second off the DODDS record. He then clocked 40.3 in the 300s, an event in which the record of 38.20 has stood since 1981.

Records aside, Palmer&#8217;s times on Saturday still were impressive.

Adjusted to fully automatic time, the 110 time was 15.24, which would have won the European high school gold medal last May by two-tenths of a second. Palmer&#8217;s time in the 300, adjusted to 40.54, surpassed his 2002 European-winning time by nearly a second.

That watch said two things. First, that Palmer had set the Ramstein school record in the event, and that the DODDS-Europe record was a realistic possibility. It was a far cry from where he began as a freshman.

Palmer knew improving his technique and keeping his arms from flailing were nearly as important as speed in the hurdles, one of the most technical of track and field events.

It follows, then, that coaching is vital, too. Possessing such specialized knowledge is asking a lot of Ramstein coach Cecilia Grosselin, who was a distance runner. But she has found a way around that.

&#8220;He comes out a couple of times a week to help us,&#8221; Grosselin said, and Palmer credits him, along with his teammates, other coaches and family with bringing out the best in him.

Also helping, according to Palmer, is an instructional video by one of the best.

Palmer and his backers think the techniques will pay off in records.

Therein lies a problem, at least for now. Palmer&#8217;s times Saturday were more than a second faster than the next-best 2003 time for the 110, 16.17 by JoJo Fears of Naples, and more than two seconds better than the 42.58 run in the 300 by Maurice Brigham of Kaiserslautern on March 29.

Palmer said he wishes Brandon Strausser of Menwith Hill was back this season, even though Strausser beat him by .37-seconds for the 110 gold last May.