Quick study on the slopes 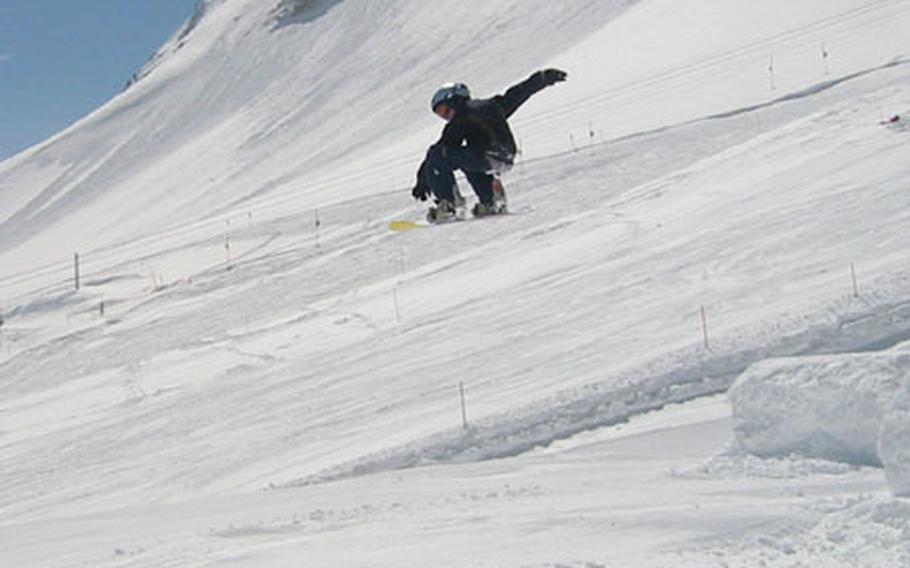 Ethan Morgan, 11, of Mittenwald, Germany, ended his 2002-2003 freestyle season by tying for his age-group freestyle title at the German Snowboarding Association championships in just his second season of competition. (Courtesy of Bill Morgan)

Ethan Morgan, 11, of Mittenwald, Germany, ended his 2002-2003 freestyle season by tying for his age-group freestyle title at the German Snowboarding Association championships in just his second season of competition. (Courtesy of Bill Morgan) GARMISCH, Germany &#8212; For 11-year-old snowboard champion Ethan Morgan, the big appeal of his sport is the big air that comes with it.

Last month, Ethan ended his second season of competition by tying for his age-group freestyle title in the German Snowboarding Association championships. Finishing two-tenths of a point out of third place in the final day of competition kept him from taking the title by himself.

Morgan also competes in snowboard giant slalom and boardercross, the snowboard equivalent of cross-country skiing, but it&#8217;s freestyle that still has the tightest hold on his affections.

The thought of one&#8217;s pre-teen son throwing himself upside down and back against the mountain would turn most parents&#8217; hair grey, but Ethan&#8217;s mother, Birgit, said she&#8217;s not all that worried about injury.

Moreover, it&#8217;s not as if Ethan&#8217;s other avocations were danger-free. When he&#8217;s not skiing, Ethan plays hockey for a club in Mittenwald, where the family lives. His summers are filled with soccer, also for a Mittenwald club, and mountain-boarding.

If he does, it&#8217;ll have to be between visits to summer snowboard camps on Alpine glaciers.

For all his dedication to snowboarding, Ethan said he isn&#8217;t planning to become a pro.

Serious fun, that is.

&#8220;In order to be able to train more, Ethan moved from Garmisch Elementary School to the German Gymnasium (high school) in Garmisch,&#8221; said his dad, who as a teacher in the Berlin American School in the 1980s had future PGA champion Rich Beem on his team.

The switch from the American to the German school system all came down to the clock, explained Ethan, a dual-nationality German and American citizen who was born in Okinawa.

For the Morgan family, those 12 hours, and an infinite number more, can be better spent on sports than on bus rides.

The choice makes Birgit, a mother of five, the mother of all soccer moms. In addition to seeing that Ethan gets to his hockey practices twice a week in Mittenwald, snowboard club practice once a week in Bad T&#246;lz, and races or games on weekends, the Morgans must also make sure that daughter Natasha, 13, gets to her six weekly figure-skating practices and regular competitions; twin sons Corey and Sean, 7, get to their hockey, skiing and snowboarding sessions, and look after 14-month-old daughter Annika.