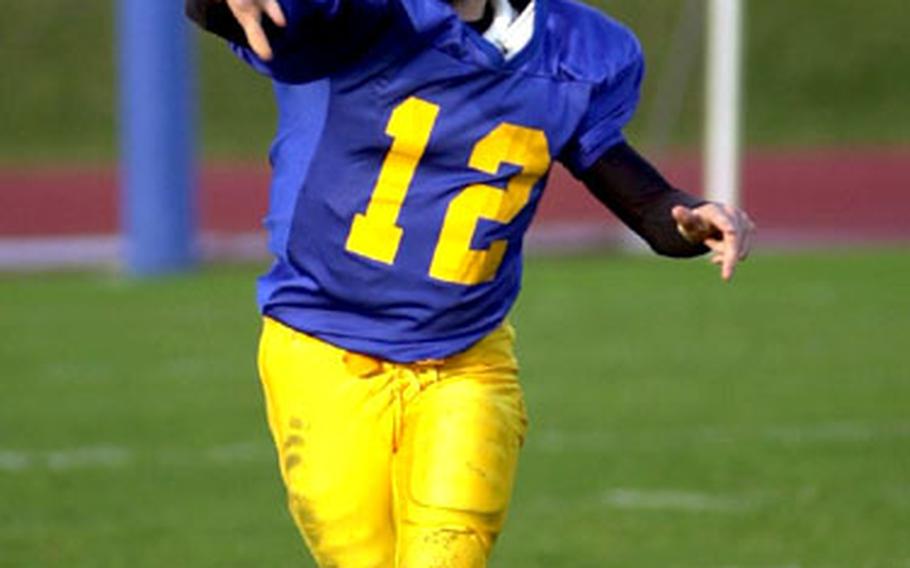 However direct the path has been, the journey from freshman hopeful to 2002 All-Europe selection and Ansbach team leader has been an unusual one for quarterback Shawn Bachtel.

Unlike the vast majority of the students who began ninth grade with him at Ansbach, Bachtel is still around.

&#8220;We&#8217;ve been fortunate to have him here for four years,&#8221; said Ansbach coach Marcus George of the player who quarterbacked Ansbach to the European Division III championship last fall.

The difference shows in Ansbach&#8217;s record.

When Bachtel was a freshman, the Cougars went 1-5. Since then, they&#8217;ve been European Division III semifinalists and European champions.

George was talking about his quarterback, but he might just as well have been talking about the whole team. The Cougars are riding an 11-game winning streak, longest in DODDS-Europe, and have defeated all three of this season&#8217;s opponents by mercy rule and by an average margin of 48-6.

All this in spite of every opponent wanting to knock off the defending champs.

Bachtel added that the pressure on him as an All-European returnee is less than last year.

Not to mention what to do.

That last quality has been significant this season.

With Bachtel providing stability, the moves have worked nicely.

George has put Bachtel into an offensive scheme designed to take advantage of all that speed.

&#8220;We put him in a specific offense that capitalizes on speed,&#8221; George said. &#8220;[Fleet-footed sophomore] Jon Austin is our backup quarterback, so we designed a system to allow our quarterbacks to utilize their speed. We move the quarterback a lot, allow them to roll out. We don&#8217;t drop back in the pocket much.&#8221;

Not that Bachtel would mind.

Bachtel hopes to combat the problem in a couple of ways.

Stateside experience, for another.

Even so, Bachtel said he has no regrets about playing in Europe.